Wide draw at Doha gives Cougar a mountain to climb 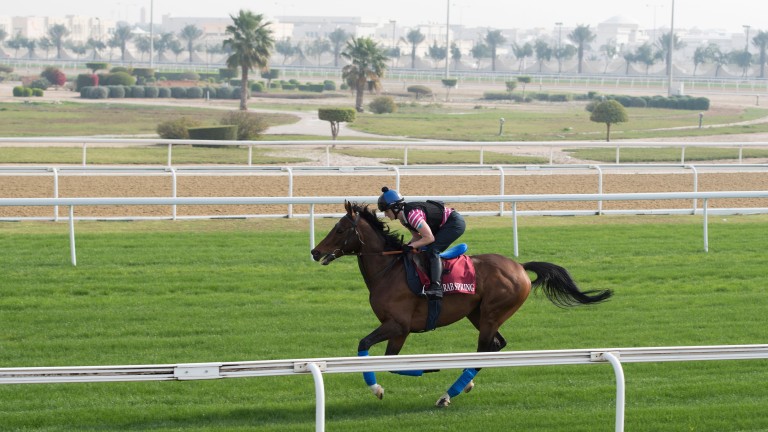 Arab Spring and Ewelina Galecka work on the turf track at Al Rayyan racecourse ahead of his run in Saturday's HH The Emir's Trophy
Edward Whitaker
1 of 1
By Paul Crabtree 6:54PM, FEB 23 2017

Cougar Mountain jetted into Doha on Thursday for a smash-and-grab raid that connections hope can give all-conquering trainer Aidan O'Brien a first winner with his first runner in Qatar.

But rider Donnacha O'Brien has a tough draw to contend with in Friday's Irish Thoroughbred Marketing Cup, a local Group 2 over a mile on turf that is the feature race on day two of the three-day HH The Emir's Sword meeting.

Coolmore representative Kevin Buckley said on Thursday morning: "It's very much a flying visit as he's arriving later today and heads home on Saturday. That won't be a bother for him – he's a very talented horse, the outstanding horse in the race on form – but stall 15 of 16 is a definite worry."

The difficult draw for Cougar Mountain, winner of the Group 2 Joel Stakes at Newmarket last September, has boosted Richard Hannon's hopes that he can go close with Tupi, the mount of Sean Levey in stall 9.

He said: "Cougar Mountain will be tough to beat but his draw could definitely be a problem for him over a mile on what is a tight track.

"Tupi has a bit to find with a couple of them but has a solid each-way chance. He might have just needed his comeback run at Meydan after a break and it should have put him spot on for this."

Tupi stretched his legs under Hannon's assistant Tom Ward on Al Rayyan's dirt track on Thursday morning along with the David Nicholls-trained Sovereign Debt, who completes the trio of overseas runners in Friday's big race.

The Sir Michael Stoute-trained Arab Spring, favourite for the $1 million HH The Emir's Trophy, thoroughbred highlight of Saturday's Doha card, pleased connections with a spin on the turf track.

Berrahri will attempt to bring his stay in St Moritz to a successful conclusion when turning out on Friday, five days after a gallant fourth in the Longines Grosser Preis.

Swiss rules prevent the six-year-old from racing both on Friday and again at the climax of the White Turf season on Sunday, although John Best still has Berrahri doubly engaged as insurance.

"The race tomorrow looks easier than Sunday's and he's clobbered by penalties because of his success last year," said Best on Thursday.

"If by chance it snows heavily and they have to call racing off, I didn't want to be in a situation where he wasn't entered on Sunday."

Best is in any case due be represented on Sunday, when Eddystone Rock could contest the Grand Prix if blood tests prove satisfactory.

Best added: "Gung Ho Jack will run on Sunday and seems really well in himself, but my concern with him is that he doesn't quite seem to be getting home on this track, while it's also a better race than his last two starts."

FIRST PUBLISHED 6:00PM, FEB 23 2017
Tupi might have just needed his comeback run at Meydan after a break and it should have put him spot-on for this