Why have the Irish dominated the last decade at the Cheltenham Festival? 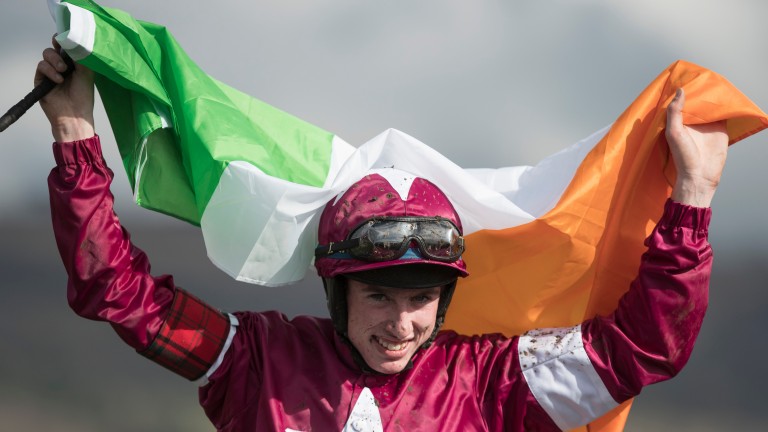 A lot can change in a decade and the growing dominance of the Irish at the Cheltenham Festival is becoming all too potent to ignore.

Irish trainers have won more festival races than their counterparts in Britain in three of the last four seasons, drawing on the other occasion last year.

Such is the depth of jumping talent in Ireland, it is hard to envisage another Gold Cup where the two Irish representatives are sent off at 100-1, as was the case in Synchronised's Gold Cup in 2012, while the thought of a Champion Hurdle without a runner trained by Willie Mullins – it happened in 2010 – is equally difficult to imagine in the current climate. 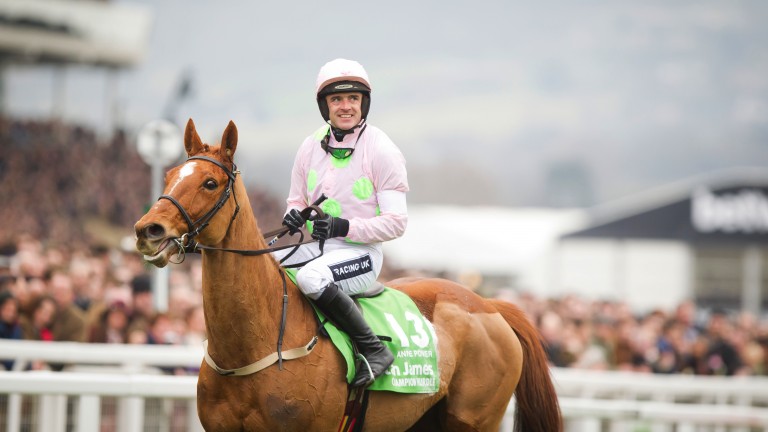 Despite the volume of runners travelling to Cheltenham from Ireland noticeably increasing in the last five years, it would still have been profitable to back every single Irish-trained contender at the 2017 and 2018 Cheltenham Festivals, a statement also true when the number of runners was not quite so substantial in 2011, 2013 and 2014.

The bare facts and figures tell part of the story, but trying to understand why the Irish are gaining the upper hand is something worth analysing in detail.

Ireland's champion trainer Willie Mullins and his main title rival Gordon Elliott have propelled the Irish challenge to the next level in the last decade, with the pair responsible for 75 of the 129 Irish-trained Cheltenham Festival winners – Mullins 50, Elliott 25.

To put that into context, of the 30 Irish trainers who have won a Cheltenham Festival race in the last decade, Henry de Bromhead is next best on seven winners, with Jessica Harrington (five) and Tony Martin (four) following him on the list.

Mullins has his name on the ten-year roll of honour on 17 of the 28 festival races, including 12 of the 14 Grade 1 contests. The Queen Mother Champion Chase, a race Mullins has never won, and the Triumph Hurdle are the two top-level events Mullins has failed to capture in the last decade. 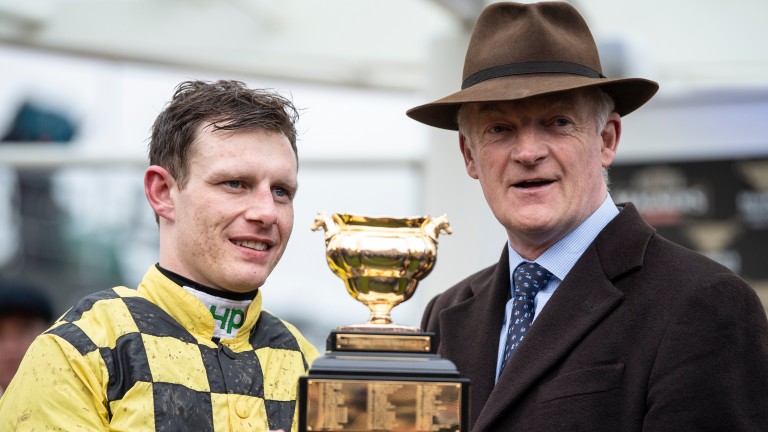 Supporters of Chacun Pour Soi may note the lack of a Champion Chase win but, then again, Mullins overcame the absence of a previous Gold Cup success with Al Boum Photo last year. It may only be a matter of time.

Breaking down the Mullins statistics even further, his attention is clearly on the festival's non-handicap Graded races, with 42 of his 50 wins coming in those contests. The remaining eight all came in handicap hurdles.

The first handicap of the Cheltenham Festival, the Ultima Handicap Chase, is the only race that has not been won by any Irish-trained runners in the last ten years. The Close Brothers Mares' Hurdle (nine winners) and Glenfarclas Chase (eight) are the most successful races for Irish runners in the same period.

What is the basis for the Irish advantage?

It is a common theory the Irish are gaining extra traction in the handicaps, and an increasingly common complaint from Irish trainers that they are getting a raw deal from the British handicapper. 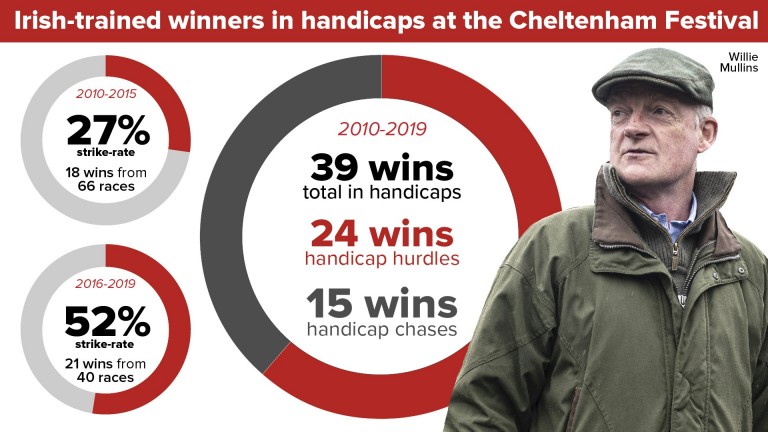 Regardless of which side of the fence you fall on, it is an argument which will inevitably reignite on Wednesday when the weights for this year's handicaps are announced.

The Irish have had more of an impact in handicap hurdles, winning 24 in the last decade compared to 15 handicap chases. The remaining 90 winners (70 per cent) have come in Graded or conditions races. 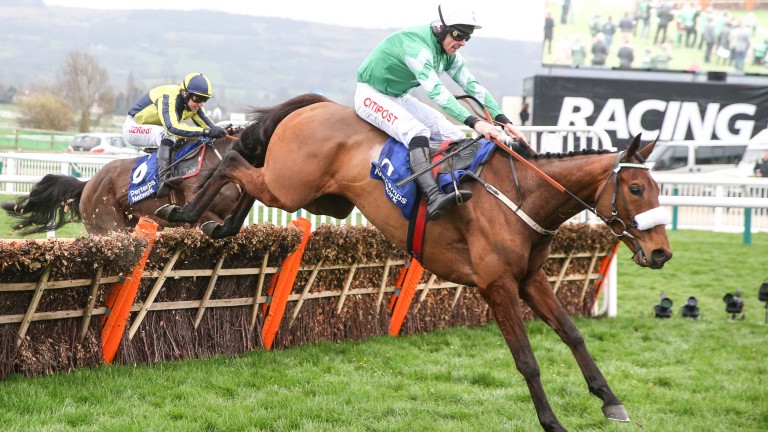 Presenting Percy: Pertemps winner was one of seven handicap victories for Irish trainers at the 2017 festival
GROSSICK RACING

However, the overall figures for the ten-year period downplay the definite growth of the Irish handicapper at the festival. Of the 39 handicap winners across the decade, 21 have come in the last four years alone, including seven (from ten races) in 2017.

Leopardstown a vital junction on road to Cheltenham

Cheltenham, Naas and Navan are all described as per the Racing Post course descriptions as left-handed, galloping and undulating, with Leopardstown also considered a galloping, left-handed track, so similarities can easily be drawn between the configurations of these four courses. 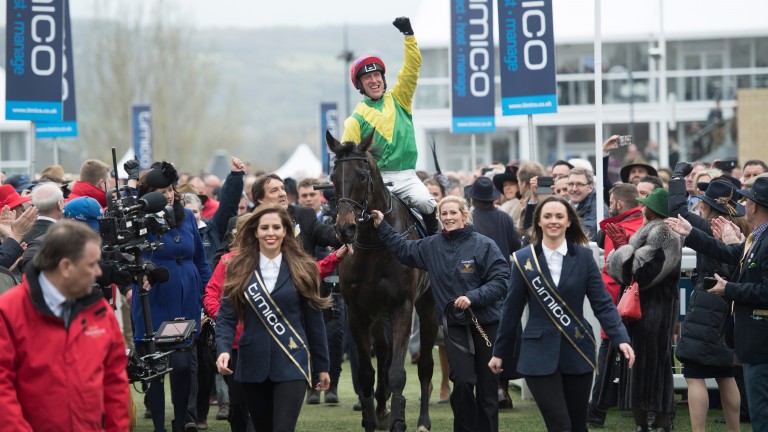 Interestingly, four of the seven runners who had their last run at Punchestown finished second or third before subsequently winning at Cheltenham, perhaps suited by going the other way around and a comparatively stiffer track. The other three who prepped at Punchestown – Annie Power, Diamond King and Douvan – won their last run before Cheltenham.

It is clearly prudent to review the form of any Irish runners turning up at Cheltenham via a final stop at Leopardstown, especially as 21 of the 29 festival winners to take that path in the last five seasons finished either first or second at Leopardstown in their race before Cheltenham.

A total of 36 of the 78 Irish-trained Cheltenham Festival winners (46 per cent) won their last start before the festival, with a further 15 finishing second and nine third.

How do the markets look this year?

Ireland are a general 4-7 to win the Prestbury Cup – the competition which officially pits British and Irish-trained runners against each other throughout the week. Britain are a top-priced 9-4 with William Hill to win for the first time since 2015, while a tie across the 28 races is available at 6-1.

The chances of all 28 ante-post favourites prevailing are somewhere between slim and none, but as a method of gauging the respective chances of British and Irish runners this year it provides some small insight. 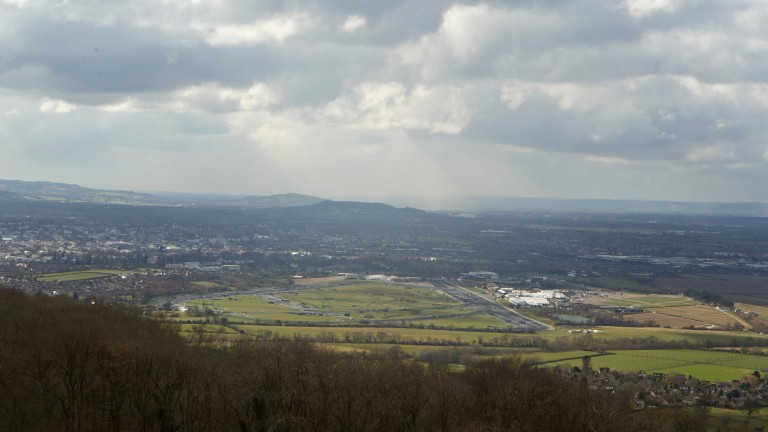 Calm before the storm: will Ireland dominate again at Prestbury Park?
Patrick McCann

As of Wednesday morning (February 26), 16 ante-post favourites are trained in Britain, headed by Stayers' Hurdle favourite Paisley Park who is available at a top price 8-11.

A further 11 ante-post lists are headed by runners trained in Ireland, including Benie Des Dieux, Envoi Allen and Tiger Roll. Bookmakers view the Gold Cup as too close to call and cannot split Ireland's Al Boum Photo and Britain's Santini, with both generally available at 7-2.

In which races does it pay to follow the market leaders at the Cheltenham Festival?

Cheltenham Festival: jockeys and trainers who could surprise with winners