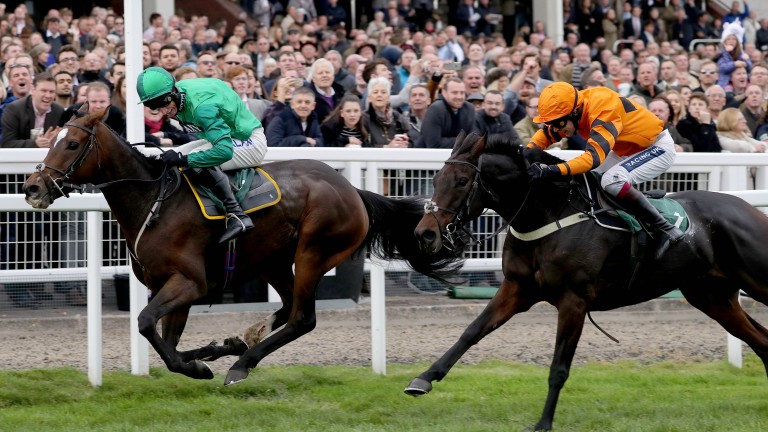 Wholestone, a highly progressive young stayer, boasts the highest BHA rating of the sextet and looks the one to beat.

The Nigel Twiston-Davies-trained five-year-old stepped up on an easy ten-length Warwick maiden hurdle win in September to beat reopposing rival, West Approach, by half a length in a Cheltenham novices’ hurdle the following month.

He showed further improvement once again when finishing runner-up to Peregrine Run in Grade 2 company at the Prestbury Park track last time, and in so doing confirmed his superiority over West Approach who was three and a half lengths adrift in third.

Twiston-Davies said: "He ran a superb race at Cheltenham last time when he was unlucky not to win, and the extra distance should help."

Colin Tizzard, trainer of West Approach, feels he has the six-year-old in tip-top shape, and is hoping he can turn the tables on his old adversary Wholestone.

"He showed lovely form at Cheltenham the last twice, and he's had a good break since that last run," Tizzard said.

"He's a nice, progressive horse, who seems particularly well at present. He looks a picture, and I am sure he will run his race."

The Paul Nicholls-trained Anchor Man takes a considerable step up in class after landing an Exeter novice hurdle last month by eight lengths from Farm The Rock, and his trainer admits he faces an uphill task.

"Anchor Man has it all to do," Nicholls said. "He won his novice hurdle, but it was an ordinary race and this is different class. It's hard to find races though."

Dan Skelton's comfortable Hereford scorer No Hassle Hoff is another who goes up in grade, but the trainer believes the four-year-old will acquit himself well.

"I think if you can get Wholestone beat then you can beat West Approach because they have run pound for pound," he said.

"The other four, including mine, all look like nice horses, but how good are we? We are chipping in against the top two and we will find out."

Skelton added: "I like No Hassle Hoff. I think the track will suit and he obviously wants this sort of trip. We have just go to get on with it and see how we get on."

Neil Mulholland saddles the one unbeaten runner in the line-up, Impulsive Star, winner of an Irish point-to-point, a Cork bumper and a Ffos Las maiden hurdle from three career starts.

He is likely to encounter vastly different ground conditions this time after ploughing through the Ffos Las mud on his latest start, but as a son of Busy Flight, a multiple fast-ground winner on the Flat, he should not be inconvenienced by the quicker terrain.

Mulholland said: "He won nicely last time, but this is a big step up. We are hopeful he will produce a good race. The ground suits him, but a bit of overnight rain wouldn't hurt."

FIRST PUBLISHED 6:00PM, DEC 9 2016
He ran a superb race at Cheltenham last time when he was unlucky not to win, and the extra distance should help