Who will land the opening race? Four experts give their verdicts 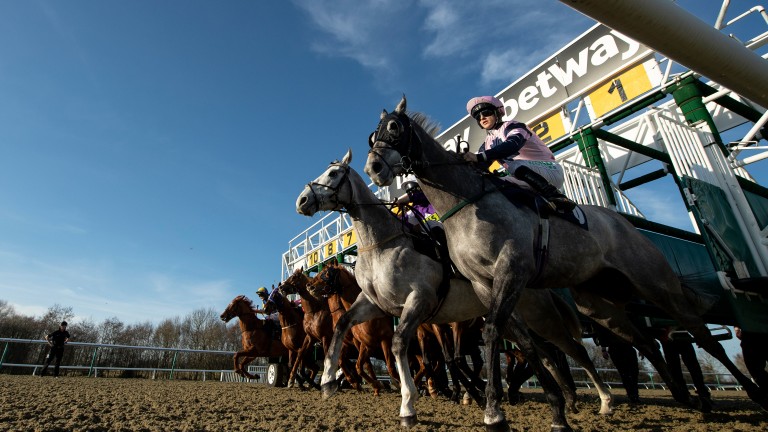 And they're off! All eyes will be on Newcastle come 1pm on Monday
Edward Whitaker (racingpost.com/photos)
1 of 1
By Lewis Porteous UPDATED 10:05AM, JUN 1 2020

With the first contest of British racing's eagerly anticipated return comes the first significant gamble, and punters relying on all-weather maestro Mick Appleby to deliver the perfect result for them with Stone Mason.

The new-look 72-hour declarations have meant prices for Newcastle's ten-race comeback card have been available since Friday and the most popular choice bar none has been Stone Mason.

He was as big as 7-2 initially but 6-4 was the general price available on Sunday evening, with punters expecting his first start for Appleby and shrewd owners The Horse Watchers to be a winning one, although his trainer appears cautiously optimistic rather than brimming with confidence.

"He goes well enough at home but he's been off the track a fair while," said Appleby on Sunday. "He's a big horse and might just need the run, so I'm surprised he's been punted like he has. Having said that, he's nice and probably on a decent enough mark. He should go close but I wouldn't be backing him at 6-4."

Will punters get off to a flyer as racing returns? Thankfully we do not have to wait much longer to find out.

What our experts say

Punters have braced themselves for relentless competitive races on the resumption of racing, with many horses no more than a rung or two off cup final mode.

The build-up to the opener will be feverish and that has helped to form the market. Since Friday, the real unknown quantity in the field, Stone Mason, has gradually shortened to around 6-4.

He is well bred, being by Pivotal out of an unraced sister to Mozart. He raced over further than this mile trip last year for Roger Charlton and often struggled to see out his races. The Horse Watchers have bought him and sent him to Mick Appleby. If he's fit, he should win, and both received wisdom and the market are telling us that he is.
Keith Melrose

This won't take a huge amount of winning and, given his connections, Stone Mason is likely to have the potential to improve well beyond his rating of 63. Mick Appleby is well able to ready one off the back of an absence and there really isn't much not to like about Stone Mason other than his price.

With that in mind, it could be worth looking towards Roger Fell, who has three runners in the race, for the winner. The betting and the ratings suggest Al Ozzdi is the number one but My Boy Lewis shouldn't be underestimated. A winner off 70 a couple of seasons ago, My Boy Lewis hasn't shown that sort of form for a while but, racing off a career-low mark, he could be worth chancing at a big price.
Brian Sheerin

A strong case can be made for Stone Mason. Trainer Mick Appleby and owners The Horse Watchers have a fantastic record with their new purchases and this four-year-old is unexposed after just four starts.

He showed promise when travelling well and finishing third to the now 86-rated Gold Stick over 1m2f on his debut at Wetherby last May. Two low-key efforts followed at Carlisle and Sandown but the latter was behind capable types like Nette Rousse (now rated 85), Damon Runyon (80) and Two Bids (77). He again travelled sweetly before staying on at one pace on his handicap debut when last seen at Newbury.

Now gelded, the leggy type has been given time to strengthen into his frame, so there is every reason to think he could be well handicapped off a mark of just 63. Although unsuccessful so far, he hasn't been running in bad company and this will be his easiest task to date.
Maddy Playle

This is a really interesting clash between proven, reliable sorts and horses who have disappointed but are open to plenty of potential.

I like one who fits the latter profile, Heavenly Tale, making her debut for the Tristan Davidson team. She showed some promise in three starts for Qatar Racing, earning a rating of 63 for her handicap debut. But she cost 140,000gns as a yearling and boasts a pedigree – by Shamardal out of a Galileo mare – that should make her open to plenty of progression.

Davidson has an impressive 20 per cent strike-rate with his Flat runners in the last five years and can be relied upon to have her in top shape. Her price of 5-1 looks great value and she could be capable of notching up a sequence this year.
James Stevens