Owner Hywel Jones on why he loves his star to bits 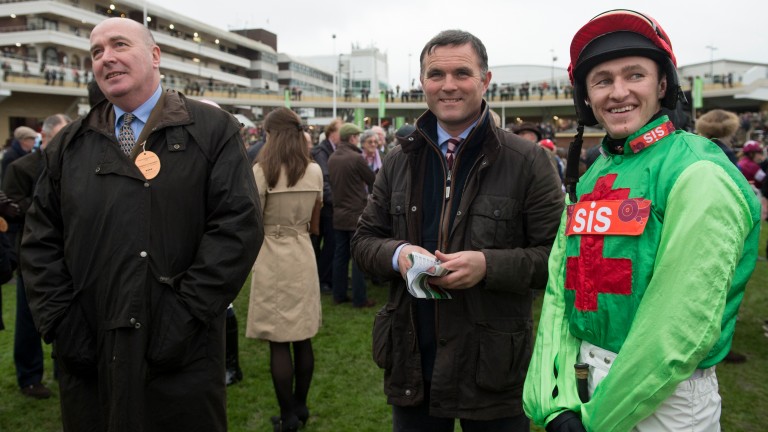 He’s just a tremendous horse to own. He’s never embarrassed us and whenever we feel a bit down we’re always cheered up by going to see him run.

It’s great that he’s earned a little bit of fame along the way. I had to smile when I was sitting in a café in Stow and heard people talking about him and saying they were going to back him in one of the big races at Cheltenham.

He had his moment in the sunshine when he won the Silver Trophy, but to finally win one of the big handicaps in the winter at Cheltenham would be something else.

I was lucky enough to win the first ever race run at Ffos Las with Plunkett, but that would not compare with a win for Buywise this weekend as we have such an emotional attachment to this horse.
We did consider running him in a hurdles race on the Friday of the meeting, but he deserves to have another pop at a big Cheltenham prize.

It would partly be relief in a way if he did manage to do it, but it would be great for the horse himself to get that winning feeling again.

He really needs good ground and it looks as if we might get those sort of conditions on Saturday. He’s got a bad back and a bad leg but once he gets going he’s a better horse at Cheltenham than almost anywhere else.

Evan [Williams] always gets torrents of advice on how to ride Buywise – much more than about any other horse. If it was easy to fix, we’d have done it by now.

I’m the best rugby player in the stands but when I’m out there on the pitch it’s a different matter. That’s why we should leave it to the jockeys to ride the race – they are the guys who have to make snap decisions.

We’ll have to see who’s available if Paul [Moloney] can’t ride. Adam Wedge has ridden him before and Brian Hughes is in great form and would be a good choice. Davy Russell would also be a possibility to galvanise him as there’s no doubt he’s a difficult ride.

We’re talking about putting some headgear on but I think he’s genuine. It’s difficult to know why he always seems to be running on at the finish but is never quite able to get there. It doesn’t help that he sometimes drifts right and almost ends up in the car park.

I’ll be there with a group of friends on Saturday and I’ll be proud of him whatever he does. He has given me the opportunity to see him run at the Cheltenham Festival and in the Grand National, and I’ve been so lucky to have a horse like him.