Steve Dennis on an epic battle between two magnificent mares 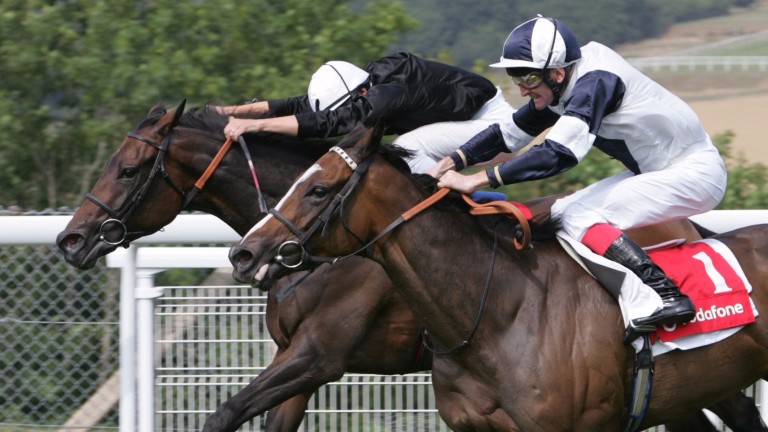 Name Ouija Board
Year of birth 2001
Pedigree Cape Cross-Selection Board
Trainer Ed Dunlop
Jockey Frankie Dettori
Owner Lord Derby
Before the duel Soared to stardom through victories in the Oaks (by seven lengths), Irish Oaks and Breeders' Cup Filly & Mare Turf. Added the Hong Kong Vase at four, and embellished her Group 1 haul in the 2006 Prince of Wales's Stakes

After the duel Narrowly beaten in the Irish Champion Stakes before returning to the US for a glorious repeat victory in the Breeders' Cup Filly & Mare Turf; bowed out with third place in the Japan Cup. At stud she produced dual Derby winner Australia

Name Alexander Goldrun
Year of birth 2001
Pedigree Gold Away-Renashaan
Trainer Jim Bolger
Jockey Kevin Manning
Owner Miriam O'Callaghan
Before the duel Ran eight times at two but thrived on hard work and was runner-up in the Irish 1,000 Guineas to Attraction before stepping up in trip to win Prix de l'Opera and Hong Kong Cup. Won 2005 Nassau Stakes and arrived at Goodwood in 2006 on back of a win in the Pretty Polly Stakes, which she had also won the year before
After the duel Below her best in three starts in Group 1 company, including the Irish Champion Stakes, and retired at the end of the campaign

George Lambton knew what he was talking about. The three-time champion trainer, winner of 12 Classics, wrote in his autobiography that 'about the best thing in racing is when two good horses single themselves out from the rest of the field and have a long-drawn-out struggle'.

Lambton would have loved the 2006 Nassau Stakes; everyone did. The only alteration to his blueprint for bliss was that here were two very good horses, top-notch horses. Three furlongs out Ouija Board and Alexander Goldrun singled themselves out from the field and drew away, and entered into the most epic of long-drawn-out struggles, the most thrilling of duels in the sun of a summer afternoon.

Ouija Board and Alexander Goldrun were almost as peas in a pod – one British, one Irish, two five-year-old mares who had spent as much time abroad as at home as they built their glittering careers. They had criss-crossed the globe almost in each other's footprints, taking their blend of talent and tenacity to a wide audience, winning hearts and lashings of prize-money as they went. In all their foreign forays they had met only once, in the Dubai Sheema Classic, and neither had been in peak form that day. It would be different at Goodwood.

Alexander Goldrun had been there 12 months earlier, winning an undistinguished reiteration of the Nassau without having to roll her sleeves up too far. The willingness to fight the good fight was her trademark, fostered by a busy two-year-old campaign that began on the first day of the season and ended in the murky light of late October.

Those exertions stood her in good stead. The following spring she ran the immaculate Attraction to a length in the Irish 1,000 Guineas before stepping up in distance, returning from her first trip overseas with fourth-place prize-money in the Prix de Diane. Her next mini-break was more profitable, bringing her first Group 1 win in the Prix de l'Opera, after which she proved that long-haul travel was no barrier to success when winning the Hong Kong Cup by the skin of her teeth.

That hard-fought victory on one of the world's great stages cemented her status in the top echelon and set the tone for a nine-race four-year-old campaign during which she bounced from country to country like a rubber ball – Dubai, Singapore, Ireland, Britain, France, Hong Kong, adding stardust to every race she ran in and two more Group 1s to her haul, the Pretty Polly and the Nassau. 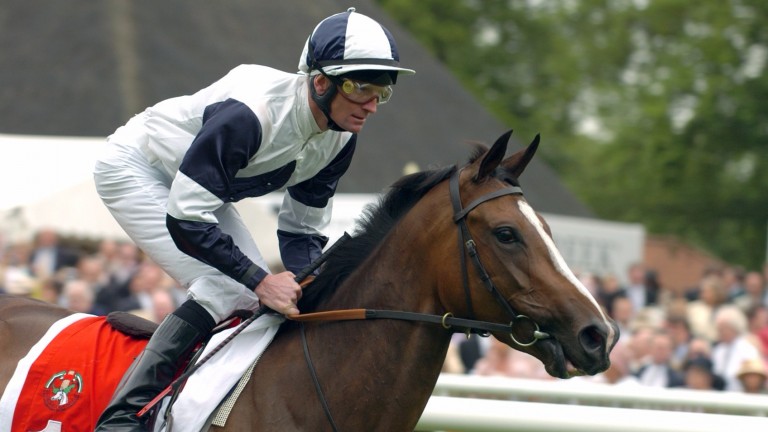 She returned to Goodwood the following year after landing a second Pretty Polly, the double double firmly in her sights. The Nassau was, however, a much stronger race than before thanks to the presence of the mighty Ouija Board, apple of the public eye.

Ouija Board had done less than her globetrotting rival but had achieved more. An unremarkable two-year-old campaign was succeeded by an outstanding three-year-old season that stamped the homebred daughter of Cape Cross as the best of her sex in Europe.

She made a small field for the Oaks look small indeed when scorching to a seven-length success without noticeably coming off the bridle, then performed a similar demolition job – without the showy winning margin – when an eased-down winner of the Irish Oaks. On the same afternoon that Alexander Goldrun was winning the Prix de l'Opera, Ouija Board finished a gallant and arguably unlucky third in the Prix de l'Arc de Triomphe; after that she began her own long-haul lifestyle when shipping to Lone Star Park to hare away with the Breeders' Cup Filly & Mare Turf.

Minor problems at the beginning of 2005 led to a shortened season, one that ended much more successfully than it had begun with victory in the Hong Kong Vase after strong displays in defeat at the Breeders' Cup and in the Japan Cup. She plainly still had what it took to mix with the very best, and although it might have looked a brave call to keep her in training for another season, that sportsmanship was generously rewarded.

She finished a place ahead of Alexander Goldrun in the Dubai Sheema Classic, lost little in defeat at Sha Tin and in the Coronation Cup, and then gained plenty on all counts with a narrow victory in the Prince of Wales's Stakes at Royal Ascot over a trip that was generally regarded to be her bare minimum. Defeat in a rough-house Eclipse – under her eighth different jockey in 18 races – preceded a return to the distaff department for the Nassau, for which she was understandably an even-money favourite.

It was a hot Nassau. Apart from the two battle-hardened mares, the race brought together Coronation Stakes winner Nannina plus third and fourth Nasheej and Race For The Stars, Pretty Polly runner-up Chelsea Rose, and Windsor Forest Stakes runner-up Echelon. Nannina was second favourite at 4-1, half a point ahead of Alexander Goldrun. Any price the rest.

The confirmed stayer Chelsea Rose set the pace until Frankie Dettori, cognisant that the ten-furlong trip would play to the Irish mare's strengths more than his own willing partner, pushed Ouija Board to the front more than three furlongs out and let her roll on down the hill. Kevin Manning, alert to this possibility and aware that Alexander Goldrun excelled in a battle, moved smoothly through from last place to let his mare eyeball the leader. Ouija Board met that gaze, unflinchingly. 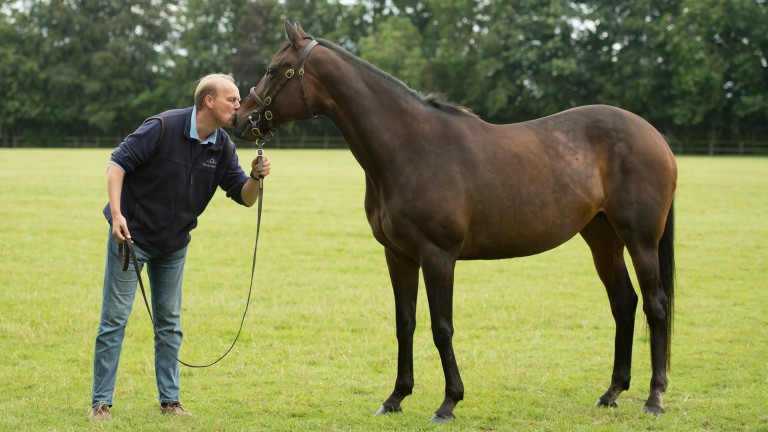 For another furlong the two raced nose for nose, something in the set of their heads communicating to the already excited crowd that this was serious, this was something special, this was it. At the distance, Alexander Goldrun put her bruiser's nose in front and left it there.

The other horses were forgotten. The rest of the world was forgotten. Everything shrank to Alexander Goldrun nearer the stands, Ouija Board on the rail, the eye snapping back and forth between their bobbing heads as the line drew nearer. In the last mad scramble of diminishing yardage Ouija Board found from somewhere the will to make one last mighty effort, and Dettori threw his arms out and put her head back in front on the line.

If the judge was trembling as he studied the photo-finish print, he was not alone in that. If everyone had held their breath for two furlongs, they were not letting it out yet. The words eventually crackled out across the Downs, 'first, number four, Ouija Board'. A short head, because we don't work in millimetres.

"When the result came up, the cheer from the crowd was incredible. She was a special filly, one of a kind," said Dettori. As the mares came round to unsaddle, both were given three cheers by the grateful crowd. "I've never heard such applause for a runner-up," said her trainer Jim Bolger. The reason for that can be found in Lambton's dictum, never truer than on that uplifting afternoon at Goodwood.