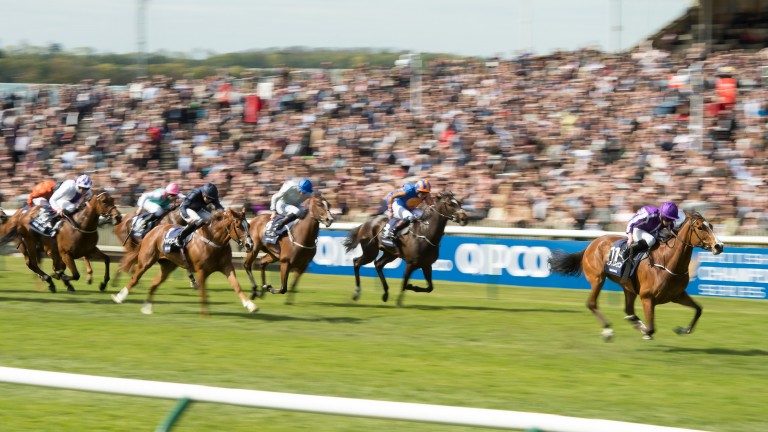 The road to the Kentucky Derby starts in County Kildare today, as the feature Beresford Stakes is the first European qualifier for the Run for the Roses in May. If there is any trainer likely to take one to Churchill Downs it is Aidan O'Brien, and he is responsible for three of the Beresford's five runners.

There are three further Group contests on the Naas card, all at Group 3 level including the Renaissance Stakes, aptly-named in this instance as it is the vehicle for sprint queen Quiet Reflection's first run since her underwhelming reappearance in May.

Meanwhile, there is Group-race action at San Siro in Italy and the Group 1 Preis Von Europa in Cologne on the same day Germany goes to the polls in their federal elections.

In Britain, the action is all jumps. Plumpton and Uttoxeter cannot boast anything to trouble the Pattern committee, but both tracks put on handicaps at the 0-140 level.

Soft, soft to heavy in places

Aside from watching all the various jurisdictions hosting big races, keep an eye out for any announcement about Cracksman's participation in the Arc.

This was possibly pre-empted by a move for him in the Champion Stakes yesterday. Follow us on Twitter and you will be the first to know.

The best bets from our usual roster of tipsters can be found here.

For subscribers, Tom Segal leads the line on Sunday.

It must be coming up to the Arc: read ten things you might not have known about master trainer Andre Fabre.

Ayr might have lost Gold Cup day, but some punters saw that as no reason not to enjoy themselves on the west coast of Scotland.

We have divided this weeks Postcast for your viewing convenience. Here is Sunday's section:

Also, to go with our On Location feature this week (Members' Club), take a behind-the-scenes look at Gordon Elliott's yard.

We also look ahead to the Premier League clash between Brighton and Newcastle.

Since Aidan O'Brien won his first Beresford 21 years ago, only five horses have broken the hegemony. Though probably not as astonishing as O'Brien's record, noteworthy in itself is that four of those have gone on to win at Group 1 level, three of them multiple times. It is undoubtedly a race to watch.