Market movers, buzz and talking points for Goodwood and Galway 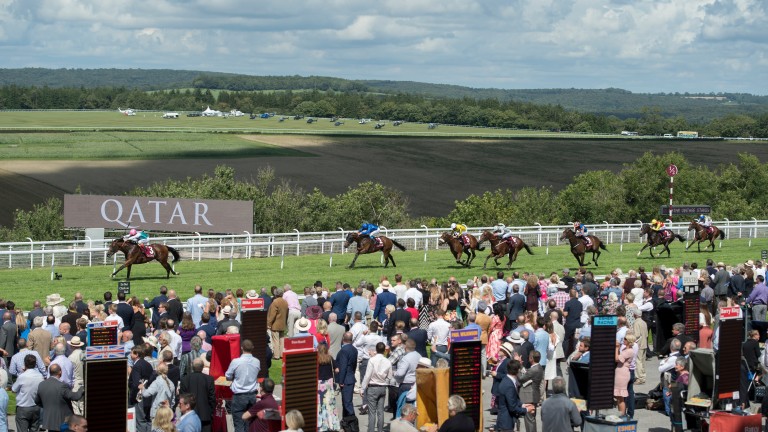 The action keeps coming from Goodwood where Expert Eye was an impressive winner on Tuesday
Edward Whitaker
1 of 1
By Bruce Jackson 2:33PM, AUG 2 2017

It’s a case of looking at the skies as much as the form book at Goodwood on Wednesday.

The forecasters were agreed that rain was going to arrive on the South Downs, where grey skies swirled about on Wednesday morning for the second day of the Qatar Goodwood Festival.

The issue was exactly when the rain would come, when it would stop and how much there would be.

And the first part of that question was answered when it started pouring downjust after 11am, having spotted on and off earlier, and by 1pmthe going was changed to good to soft after 6mm of rain.

The timing is not ideal with Goodwood’s biggest race of the week, the Group 1 Qatar Sussex Stakes, billed as a battle between Churchill and Ribchester, due off at 3.35.

But however much the expected rain influences conditions it can surely not make punting any harder than on Tuesday, with its 100-1, 50-1, 33-1 and 20-1 winners. Unless you are asingle mum from Cheshire.

Galwaymeanwhile heads into day three and it is time for the feature Tote.com Galway Plate Handicap Chase, while Perth has day two of its jump meeting and Redcar keeps Goodwood company on the Flat before the evening entertainment is served up by Sandown and Leicester.

Good to soft. GoingStick 7.3 on Wednesday at 8am.

Good to soft, good in places on the round course, soft on the sprint course. GoingStick 6.6 round, 5.2 sprint on Tuesday at 12pm.

Punters are unsurprisingly seeking out horses with soft-ground form on their CV and this Ralph Beckett-trained three-year-old appears to fit the bill. A winner on good to soft ground at Hamilton last time, he also scored in soft conditions at Haydock back in June.

While the rain is a plus for some, it is a big negative for others and a marked drifter on Wednesday morning has been the Wesley Ward-trained Happy Like A Fool. Ward is dreading the ground going soft and with the rain setting in, his fears may about to be realised.

Ribchester has been strong at the top of the market throughout Wednesdaymorning, but Zelzal appears to be the one attracting a bit of each-way support. The ground could be a question mark depending on how the weather pans out before the race but the French raider does not have too much to find on official figures to give the favourite a race.

Punters often latch on to Ruby Walsh at the big festivals and it looks like it is happening again on Wednesday, with Just Janice attracting plenty of support this morning. The daughter of Kings Theatre has been in good form of late for John Kiely and plenty clearly think that can continue.

Friday's Goodwood features become clearer with the declarations for the £300,000 Group 2 Qatar King George Stakes and one of the big betting races that is the Betfred Mile with nervous connections hoping to make the cut for the 22-runner field chasing the £150,000 money on offer.

Time to Tango for a banker bet fromRichard Birchand Pricewise's Tom Segalgoes strong at Galway for Wednesday's tipping. Fergal O'Brien had a winner at Perth on Tuesday night and Signposts Sweetspots reckons he will have another there today.

Award-winning writers Steve Dennis, Lee Mottershead and Tom Kerr have all the angles from a tumultuous first day at Goodwood.

Andrea Atzenitells Lee why he feels so lucky after his first-day fourtimer while regretting the one that got away.

Richard Forristal heads the team in Ireland and reports on an emotional win for Robbie McNamara and just why Noel Fehily flew in for one ride on Tuesday.

Don't forget The Weekender which is out today - watch the video below to learn more about this week's bumper read.

Four for the price of one with the ten-second tips for all four races shown by ITV from Goodwood today available on RPTV.Below is the Molecomb Stakes tip.

The red letter day for football punters has dawned after weeks of work by the sports team has produced today's free supplement of the Big Kick-Off with all the information you need to find this season's big winners.

Not to be outdone or forgotten there are the women's Euros coming to a conclusion and Zoe Vicarage has the lowdown on tonight's semi-final between England and the Netherlands.

Can anyone catch Andrea Atzeni for the Racing UK top jockey award at the Qatar Goodwood Festival after his first-day fourtimer? He has four more rides there today - To Wafij, Kool Kompany, a 66-1 chance in the Sussex, Naqaawa and Sun Lover.

FIRST PUBLISHED 8:25AM, AUG 2 2017
Can anyone catch Andrea Atzeni for the Racing UK top jockey award at the Qatar Goodwood Festival after his first-day fourtimer?