Goodwood Preview BEST OF THE REST

What to watch away from the feature races 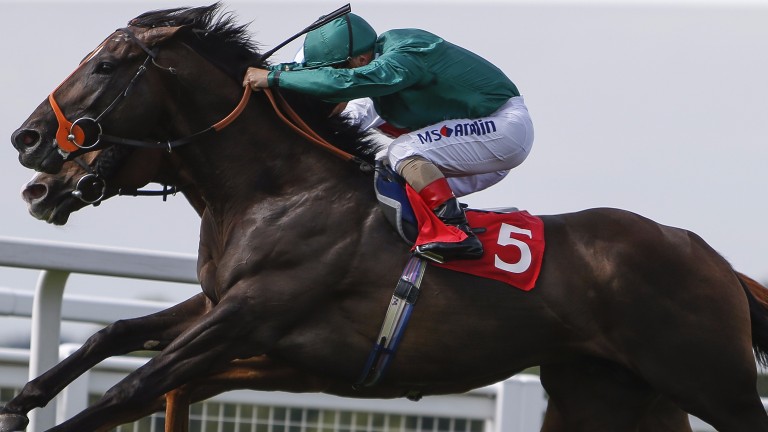 Three-year-old handicaps simply don't come any more competitive than the 18-runner Matchbook Betting Exchange Handicap (1.50), but there are certain trainers who always tend to do well in this race.

Richard Hannon, successful with Gibeon two years ago, definitely figures in this category and is responsible for one of the leading candidates, Euginio, the mount of Andrea Atzeni, who took the first day of the meeting by storm with a fabulous four-timer.

Euginio smacked of a colt on the upgrade when justifying 5-4 favouritism at Sandown last time, and his trainer said: "I always thought he'd need his last run but I was impressed at how he went about it.

"He's always been a lovely colt and, although this looks a tough handicap, he's definitely still on the improve. He should run very well."

Hannon cites the William Haggas-trained Addeybb, winner of two of his three starts and the mount of Ryan Moore, as the one Euginio has to beat, but there are plenty of others with a serious shout.

Mark Johnston, successful in this race three times in recent years via Lyn Valley (2014), Broughton (2013) and Roman Republic (2009), saddles Monticello and Morning Suit, while Sir Michael Stoute, who landed the prize with Labarinto in 2011, relies on Frontispiece, still largely unexposed after just a trio of starts.

Ralph Beckett has never declared four horses for a maiden before, let alone a Group race, so he broke new ground when confirming Melodic Motion, Diamonds Pour Moi, Rich Legacy and Alyssa for the Markel Insurance-backed Lillie Langtry Stakes, a 1m6f Group 3 he won with Simple Verse two years ago.

Alyssa is likely to miss out owing to the rain-softened ground, but the Qatar Racing-owned three-year-old Melodic Motion looks a serious player, coming into this stamina test on the back of a commanding three-and-three-quarter-length success off a mark of 90 in a Newmarket 1m4f handicap, and open to further improvement at this longer trip.

Beckett said: "Melodic Motion will handle conditions and this has long been the plan. Diamonds Pour Moi will love the ground, while Rich Legacy goes there in good form."

The daughter of Galileo created a good impression in victory at Leopardstown last time, and O'Brien said: "We stepped her up in trip last time when she got the mile and six well to win a Listed race. She's in good form and ready to step up in grade."

Ryan Moore partners Dubka for Sir Michael Stoute, and the trainer said: "Dubka stays very well and is a hardy type. She's in good shape and any further rain would increase her chances."

Godolphin are represented by Endless Time, the mount of William Buick, and Natural Scenery, who will be partnered by Jim Crowley.

Charlie Appleby, trainer of Endless Time, said: "She won a Group 2 on soft ground at Haydock last season and will appreciate any rain. She didn't see out the trip in the Gold Cup and, if she turns up on her A-game, she's going to be very competitive."

Saeed Bin Suroor, who trains Natural Scenery, said: "She ran an excellent race in the Northumberland Plate and has done well since. This distance will suit her and she's been working nicely. This is a tough contest but she always runs well and deserves to take her chance."

Will it be Aidan again?

Now it's the turn of Rhododendron's sister, once-raced Magical, to have a go.

Second at the Curragh last month, she brings a similar profile to her big sis into the race and trainer Aidan O'Brien said: "She ran a lovely race first time out when second over six furlongs at the Curragh. We're happy with her and we think, and hope, that stepping up to seven furlongs won't be a problem."