What the trainers say about their Ballyogan Stakes runners 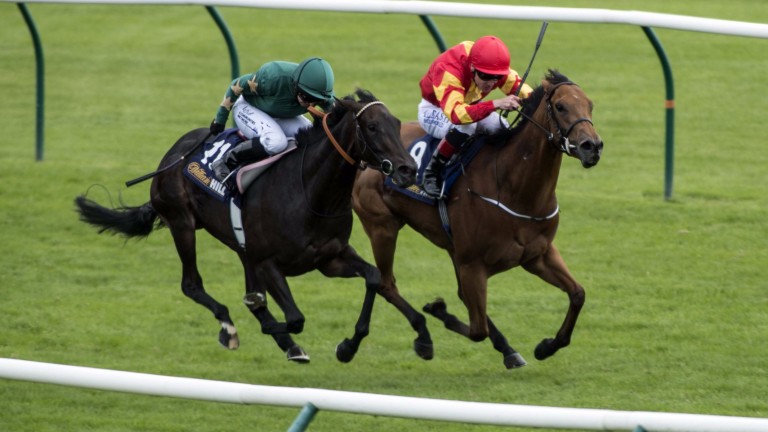 Only Mine: has strong claims in the Group 3 TRM Ballyogan Stakes at the Curragh for Joseph Murphy
Christian Cooksey
1 of 1
By Brian Sheerin 6:00PM, JUN 10 2017

A tasty prize fund of €63,000 and an opportunity to gain some valuable black type has attracted a very competitive field of 12 runners, including no fewer than five British-trained fillies.

The home defence is headed by the Joseph Murphy-trained Only Mine, who was last seen chasing home the admirable Gordon Lord Byron in a Group 2 at this track on similar ground.

Aidan O'Brien runs Alphabet, Smoulder and Music Box, while Willie McCreery, who landed this race in 2013 with subsequent Group 1 winner Fiesolana, is represented by Peticoatgovernment.

Of the raiding party, the David Evans-trained Buying Trouble and Florida Times from the David O'Meara yard are likely to be popular with punters.

David Evans, trainer of Buying Trouble
She won last time but the ground was a bit different. She's travelled so she definitely runs but, while it's the right race, it could be the wrong ground.

Robert Cowell, trainer of Evil Spell
She's been crying out for some very soft ground and, being a fillies' race, it ticks all the boxes for her. She seems in good form, is lightly raced and I'm hoping she can add some black type to her form.

Joseph Murphy, trainer of Only Mine
She's the highest-rated filly in the race but it won't be easy. We're worried about the ground and I just hope it isn’t too soft for her.

Aidan O'Brien, trainer of Alphabet, Music Box and Smoulder
Alphabet won her maiden well on testing ground so conditions shouldn't be an issue for her. Music Box, too, has winning form on testing ground, and while she's dropping down in trip we don't think that will be a problem. They're in good form and so is Smoulder, although we're not sure about the ground for her.

John Quinn, trainer of Wowcha
We're very pleased with her but this is a tough task. She won't have many more runs though because she's a half-sister to a Group 1 winner and she's in foal to Acclamation, so we're just hoping we can get a bit of black type.

David O'Meara, trainer of Florida Times
She ran a nice race at Newbury, she's in good form and I think she will handle the soft ground.

Hughie Morrison, trainer of Poet's Princess
We feel she needs soft ground. I know this is an upgrade in quality of race, but I think the race at Newmarket the other day was decent.