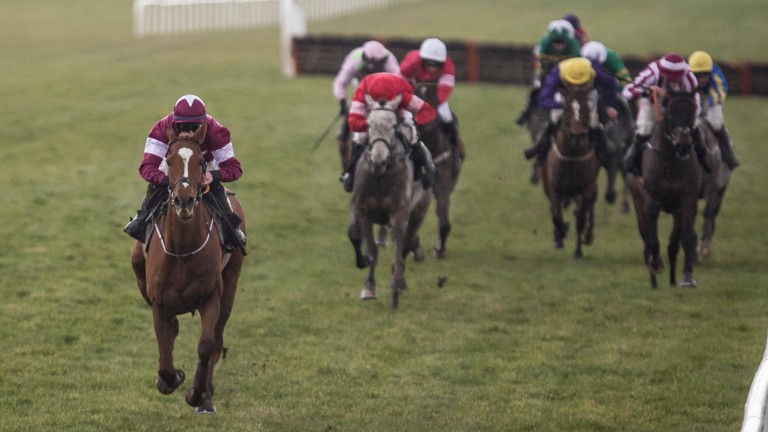 Samcro strolls away from his rivals in the Deloitte Novice Hurdle at Leoparstown
Patrick McCann (racingpost.com/photos)
1 of 1
UPDATED 6:17PM, FEB 4 2018

After his impressive success in Sunday's Deloitte Novice Hurdle, there is no question who the Irish banker of the Cheltenham Festival is going to be. The only question is: which race will Samcro run in? Three of our writers play this year's version of Supreme-or-Ballymore. . .

The Supreme, and not just because the Ballymore means an extra day waiting for the next appearance of this potential superstar!

If you landed at Leopardstown from Mars on Sunday knowing nothing about the horse and saw the way he oozed class and quickened up over two miles, you might think those banging on about the Ballymore are from another planet.

Michael O'Leary wants Samcro to be a Cheltenham Gold Cup horse and running in the Supreme didn't stop Best Mate, Kicking King, War Of Attrition and Sizing John becoming one of those.

I don't think it matters – he clearly has the speed for two miles and I wouldn't oppose him if he went for the Supreme.

Having said that, he reminds me of Monsignor, who won the 2000 SunAlliance Hurdle (now Ballymore) and Samcro won very easily when stepped up to 2m4f for the first time at Navan on his previous start.

There's less chance of finding trouble in running in the longer race, too, as the field starts to fall apart earlier. He looks the complete package with fast ground the only unknown.

I would target the Supreme because Samcro looks perfectly designed for the demands of the race. It is in effect a stamina test for inexperienced, young horses and everything connections have said about Samcro suggests his future will be over further.

Altior is the only Supreme winner since the 2012 festival to finish off his race quicker than the Ballymore winner – despite the latter being run over five furlongs further. That is because they go slower through the early stages in the Ballymore and then kick for home harder – usually somewhere between the fourth- and second-last.

Given the way Samcro travels through his races and his ability to keep galloping relentlessly all the way to the line, he is absolutely made for the Supreme. He may still be up to winning a Ballymore but due to the nature of the two races it is leaving more to chance.

FIRST PUBLISHED 4:23PM, FEB 4 2018
I would target the Supreme because Samcro looks perfectly designed for the demands of the race