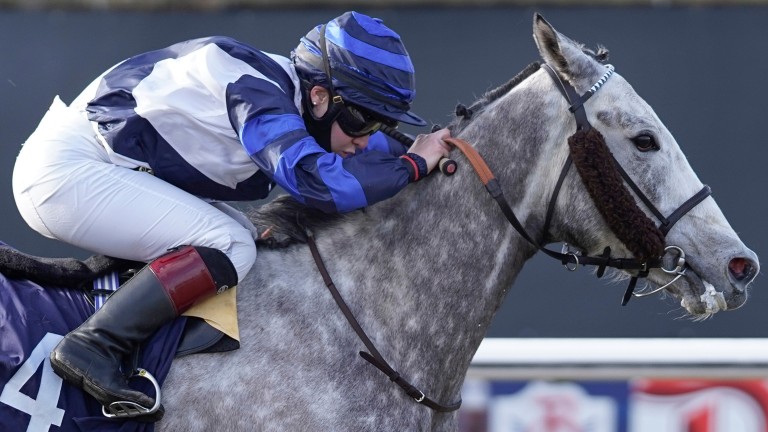 Trainer Tom Clover praised in-form jockey Laura Pearson's instincts after her ride on Crimewave in the 1m2f handicap, but revealed he plans to give her a quiet period over the next month to help protect her valuable 5lb claim in advance of the turf season.

A double provided Pearson, an apprentice at Clover's Newmarket yard, the 21st and 22nd all-weather winners of a breakthrough campaign.

"There is still a long way to go for her, but she has a great racing brain and is very cool, which is something that is hard to teach a young apprentice," Clover said.

Pearson struck with 11-8 favourite Heptathlete in division two of the 7f handicap before powering away from the field aboard the Clover-trained Crimewave to cap another superb day.

However, Clover now plans to carefully manage Pearson's schedule with loftier targets on the horizon.

He added: "We might go easier with her during February because we want her to be claiming 5lb through to May and June for some of the bigger handicaps."

Allen in from the cold

Relief was the overriding emotion for Conrad Allen as he ended a 228-day spell without a winner when Lucky Ava gave the Newmarket trainer victory in the Class 6 5f handicap under Martin Dwyer.

"It's particularly pleasing because it's got me off the cold list," Allen said. "They'd been running well and we'd just been hitting the crossbar so I was pleased to see her go in.

"I've got a few horses that are just coming right now so hopefully we’ll have a busy couple of months before the turf season starts."

FIRST PUBLISHED 5:45PM, JAN 29 2021
We might go easier with her during February because we want her to be claiming 5lb through to May and June