What connections say about their French 2,000 Guineas runners 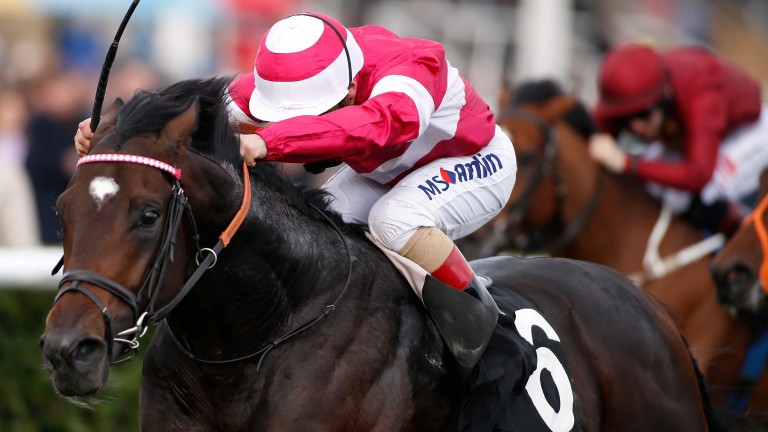 The two juvenile Group 1 winners National Defense and Rivet bring together some interesting potential storylines: France v Britain; Soumillon v Dettori; and both were beaten in their trials for this race.

National Defense rounded off last year when running right away from his rivals in the Group 1 Prix Jean-Luc Lagardere, while the form of his defeat to Al Wukair on his comeback this season has to be viewed positively in light of that horse's third in the 2,000 Guineas.

Racing Post Trophy winner Rivet also came off second best last time, to Eminent in the Craven Stakes, and is likewise expected to have come on for the experience.

William Haggas believes the softer ground may be a bonus for Rivet, as will a return to a flat track.

This is anything but a two-horse race, however, with bookmakers and the French betting public likely to favour last month's Group 3 Prix de Fontainebleau winner Brametot, who put in a stunning effort to run down his opponents having forfeited several lengths at the start.

Twelve months ago Aidan O'Brien took this race apart with Navan maiden winner The Gurkha. The trainer's Orderofthegarter was beaten by two talented stablemates last season but looks to have taken a step forward with two wins this spring.

Seamie Heffernan rode Orderofthegarter positively when beating Taj Mahal at Leopardstown and it would be no surprise to see him repeat such tactics, while Ryan Moore may be a little more conservative on Peace Envoy, the more speedily bred of the Ballydoyle pair.

South Seas ran well on his previous visit to France when clear second best behind Thunder Snow in the Criterium International, while fellow raiders Salsabeel and Kings Gift are stepping into Group 1 company for the first time.

The Wertheimer pair African Ride and Spotify – the choice of retained rider Maxime Guyon – both finished third in their trial and are potential improvers.

Andre Fabre duo Le Brivido and Inns Of Court are completely unexposed with neither having yet tackled either Pattern company or a mile.

Mankib remains as interesting as any of those campaigned away from Group company, having scrambled home in a conditions race at Maisons-Laffitte last time. Freddy Head is in no doubt there was much more under the bonnet and, as a son of 1,000 Guineas winner Natagora, Mankib is certainly bred for the job.

While the soft ground may add a bit of extra resistance, Deauville's mile is one of the easiest on the international circuit. The point is illustrated by the decent record of horses like Moonlight Cloud and Whipper in attempting the sprint-mile Group 1 double at the August meeting. Peace Envoy, Salsabeel and the Fabre pair have yet to tackle a mile, while South Seas is another to have shown his best form over a shorter trip.

Freddy Head, trainer of Mankib
He's quite a cool colt but is well and I think he's up to a race like this. The ground won't be an issue.

Jean-Claude Rouget, trainer of Brametot
He's very well and I expect him to run well. I’m not worried about him getting behind because he's won all his races like that. A good pace will help him.

Andre Fabre, trainer of Le Brivido and Inns Of Court
They're two good maiden winners with good pedigrees. Le Brivido’s form is quite good because he beat Freddy Head’s winner from Maisons-Laffiitte on Thursday and at two he beat Uni [who won a Listed race on Thursday's card]. I don’t have much doubt about the distance and that's why I'm taking a chance. Inns Of Court has ability but is still a bit green.

Aidan O'Brien, trainer of Orderofthegarter and Peace Envoy
Orderofthegarter has done very well, winning his two races nicely this season. He's progressive and we're hoping he can improve again in his first Group 1. Peace Envoy has plenty of experience and ran quite well over seven furlongs at Naas last time. This will be his first time going a mile.

Charlie Appleby, trainer of Salsabeel
The Rowley Mile just doesn't suit him. I was a little apprehensive about it before his last race, but he confirmed he doesn't like it there. Deauville is a more conventional track, and I expect him to be better suited. Overall I thought he ran well last time, and he's in good order for this race.

David Redvers, racing manager to Qatar racing, owners of South Seas
He's in very good form and the rain-softened ground will help. We think the track will suit, and it's a very open race this year so we're hoping for a bold show. He was ridden wrong in his trial at Newcastle, which was our fault, and he'll have different tactics this time around.

Criquette Head-Maarek, trainer of National Defense
From what I can see there should be plenty of pace and that would suit me because we can wait a bit. But Christophe [Soumillon] will ride him how he feels, I won't give him any orders. National Defense ran well in the Djebel and has improved quite a lot since. I don't think it will be really soft and I wouldn't use that as an excuse. If the horse is good enough he'll win.

William Haggas, trainer of Rivet
The rain they've had will help him and he looks to have a nice chance. He's pleased in his work since the Craven and I hope he can run well.

FIRST PUBLISHED 6:00PM, MAY 13 2017
He's very well and I expect him to run well. I’m not worried about him getting behind because he's won all his races like that.