What connections say about their chances in the world's richest race 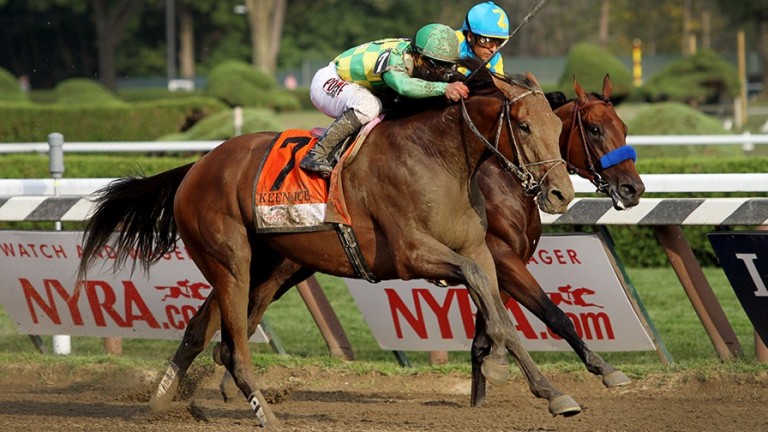 Keen Ice (near side): seeking another shock victory in Pegasus World Cup, having failed to score since beating Triple Crown hero American Pharoah in the Travers Stakes of 2015
EquiSport Photos/Jessie Holmes
1 of 1
By Nicholas Godfrey in Miami 6:19PM, JAN 27 2017

Dale Romans, trainer of Prayer For Relief
He's just been so happy, so fresh about the way he's training and doing things the right way. We're just hoping that he runs the way he trains. He just kept putting in one good work after another. It got to where he's just done so well that he deserved a chance. If you go back to his old form, he's been a top-class horse and he likes this racetrack.

Todd Pletcher, trainer of Neolithic and Keen Ice
I think both of our horses are in very good form at the moment, training very well and had productive races over the track. It’s fun for us to have a big race at home and not have to ship cross-country. Whether that’s enough to overcome the talent of the two favourites we’ll see, but we’re excited about the opportunity and excited about the way the horses are training.

The thing about Keen Ice is you can't change his running style. It’s not like you can put him on the lead and try to steal something. The key for him to contend would be a hot pace and a good trip. On paper, the race should have plenty of pace – but of course they don’t run them on paper. We just have to hope it develops in a way to enhance his late kick but they're two awfully good horses we're competing against.

Mark Casse, trainer of Noble Bird
We are one of the outside contenders – if there really are any contenders outside Arrogate and California Chrome. I have the utmost respect for both horses and their connections. It’s a tall task, but we feel if they stub their toes and we run the race of our lives...[we might have a chance]. He’s never run here but I think this racetrack will suit him and he holds a track record at a mile and an eighth.

Dan Schafer, 'stakeholder' for War Story
We're right in the middle of the pack, where we wanted to be, so we'll see what happens. With Arrogate on the rail and Chrome outside, they’re still the top two dogs, no doubt about it. But I feel good with where we're at.

Jimmy Jerkens, trainer of Shaman Ghost
He's an in-between horse. He doesn't have early lick but he's not a plodder either. He should be able to draft in behind and save some ground into the first turn and be in a good spot. Basically, I like what I see. His works have all been good and he looks perfectly good in the flesh and is fit. I can't fault him coming in here.

Paul Reddam, owner of Semper Fortis
We’ll run a horse to get some of the money back. If you don't have a realistic shot of running one-two and you're more likely to finish in the pack, you have to take your lumps.

Reade Baker, trainer of Breaking Lucky
Everything has gone on schedule. We're in pretty deep waters here but he couldn’t be any better. He’s a big, sound, healthy horse in the prime of his life. This is it for him. He won’t get any better than this. The draw's not great. I would've liked to have had the four or five but I can see the horses on the inside going hard.

Laura Wohlers, trainer of Eragon
He looks like he's a nice racehorse. He's got some wins under his belt and he's mature and he understands what he's doing. It's our normal MO to run without Lasix anyway, so the weight allowance gives us an advantage.