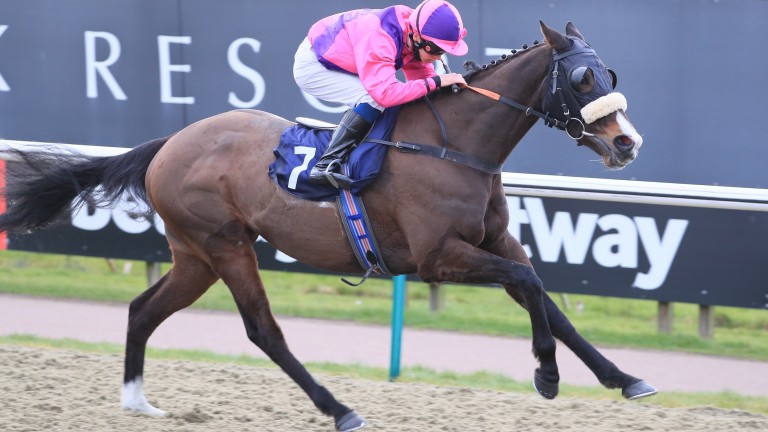 The seven-timer-seeking Caribeno and Byford, who was aiming for a fourth consecutive victory, were thwarted in their tracks by a career-best performance from Crimson King in the feature 1m4f handicap.

Crimson King, owned by Terry Pryke, backed up a recent course win over 1m5f with a smooth three-length success under Hollie Doyle.

Trainer Mick Appleby said: “He’s starting to get his act together as we’ve always thought he’s decent. He’s a good work horse but was not quite putting it all together on the track.

“His confidence is up and I think that’s been since he went jumping – he’s come back on the Flat and must think this is easier!

“He has a great turn of foot so I thought he had a very good chance with a good gallop on, hopefully there’s more improvement in him and he can translate his form to the turf.”

Doyle landed the other Class 3 handicap over 7f aboard the Archie Watson-trained Going Places and the Hambleton Racing-owned five-year-old made it two wins from three starts since being bought for 20,000gns.

Monsaraz took his record to three wins from four starts since joining David Loughnane when triumphant in the 1m4f handicap.

The Peter Onslow-owned four-year-old defied a career-high mark under Rossa Ryan with a three-quarter length success.

Martin Harley rode his fourth winner from 11 rides in the past fortnight on the Alan King-trained Rafiki in the mile novice stakes.

The three-year-old, who is owned by the trainer and Niall Farrell, backed up his success over 7f at Wolverhampton in October to register a second career victory.

FIRST PUBLISHED 6:00PM, MAR 12 2021
His confidence is up and I think that’s been since he went jumping – he’s come back on the Flat and must think this is easier!

Edwardstone team up for the fight but few follow suit as British entries plummet From the favourite to a dark horse: four hot Arkle topics plus analysis and tip 'There is no better feeling' - relentless Stag Horn delights Scholfield 'It was a shame' - jockey misses out on winner after positive Covid-19 test 'He deserves his spot in this race' - Grade 2 novice hurdle insight Teddy Grimthorpe becomes Imad Al Sagar's new racing manager