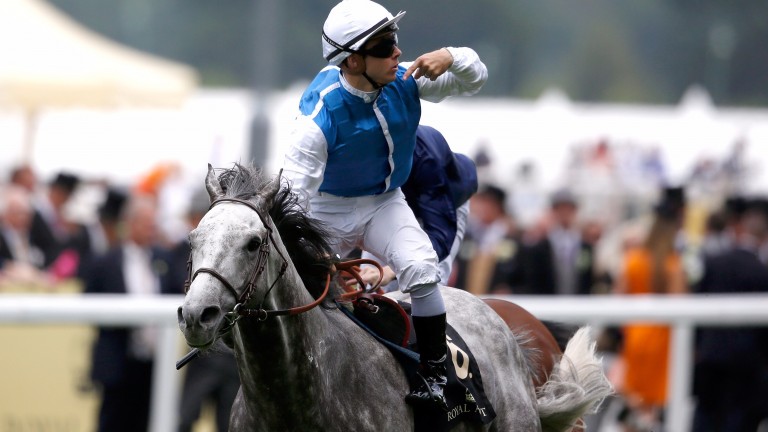 Solow will spend his retirement at the Wertheimers' Haras de Saint-Leonard in Normandy
Alan Crowhurst
1 of 1
By Scott Burton 8:43PM, MAY 22 2017

Trainer Freddy Head and owners the Wertheimer brothers have retired crack miler Solow, the winner of five Group 1s during the 2015 season.

The grey son of Singspiel has not been seen on a racecourse since winning at Chantilly in March 2016, after which he suffered a leg injury while preparing for the defence of his Dubai Turf crown.

Solow was reportedly training well earlier this spring and had been entered for the Queen Anne Stakes at Ascot next month but Racing manager Pierre-Yves Bureau said on Monday evening that the horse had not returned to his glittering best.

"The horse is well but is not quite at 100 per cent and we don't want to take the slightest risk with him, so we have decided the prudent thing to do is to retire him," said Bureau.

Solow was bred to have plenty of stamina and it was only after trying him over very nearly two miles that Head decided that his charge showed enough speed in the mornings to drop back to a mile.

The results were startling and Solow rounded off 2014 with impressive wins at Deauville and on Arc weekend in the Prix Daniel Wildenstein.

In 2015 Solow would earn recognition as Cartier Older Horse of the Year and was denied overall honours only by the exceptional Golden Horn.

The exuberant celebrations of his new partner, Maxime Guyon, became a feature of the year, from his breakout performance in Dubai to a hat-trick in Britain, with wins at Royal Ascot and on Champions Day in the Queen Elizabeth II Stakes bookending his Sussex Stakes success.

Reflecting on Solow's career, Bureau said: "I promise you that winning the Queen Anne Stakes at Royal Ascot was a magnificent moment and we had already won that race with Goldikova, so it was extra special. It was a great occasion and he put up a great performance that day."

Bureau added: "There are lots of reasons why his story was special, from the fact that he had to be gelded and then the way he found his best form later on over a mile. He was a great horse to be around and Freddy did a wonderful job with him. He will now enjoy a thoroughly well deserved retirement at the Haras de Saint-Leonard."