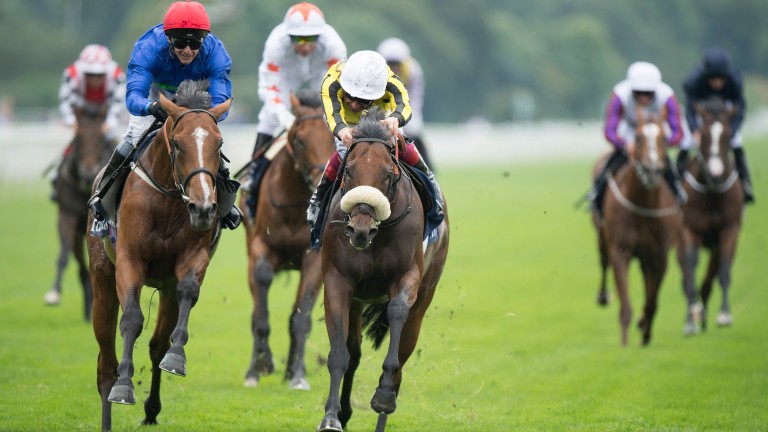 Wells Farhh Go got up under David Allan to deny James Garfield in a thrilling conclusion to the Acomb Stakes and land the spoils for local trainer Tim Easterby.

Before the race all the money was for another son of Farhh, Dee Ex Bee, who was backed from 5-2 into 5-4 and he broke well and settled in third behind Danzan and Fleet Review.

However, as the race entered the final two furlongs the alarm bells soon started to ring for favourite backers as Dee Ex Bee started to struggle.

James Garfield was the first to break clear from the pack under Frankie Dettori but Allan began to close on his mount and he timed his run to perfection, delivering 10-1 shot Wells Farhh Go on the line to edge a thrilling tussle.

"I thought it was me," said Allan, who picked up a seven day whip ban after the race. "On the last stride he really stuck his head down and I thought he’d got it in the photo, although it was quite hard to tell.

"He's showed his inexperience as I thought I had the race won when he hit the front, but Frankie burst through and gave him something to run down. He was having a good look in front and there's more when he steps up in trip. He’s got the potential to improve."

Wells Farhh Go was introduced into the Classic markets, with Betway going 33-1 for the Qipco 2,000 Guineas and 50-1 for the Investec Derby.

The winner holds entries for the Royal Lodge and a Group 1 in France but Easterby is not in a rush to finalise any plans for his juvenile campaign.

"He's in the Royal Lodge and a Group 1 race in France but I'm not sure whether he'll run in one of them as he's a big horse and wants time. Next year will be his year. We don't put him in a Group 1 race for the sake of it, though – it's a bloody dear do.

"He's a very good horse in the making and one day he'll be a proper horse. I had a lot of offers for him after his last run, but I resisted."