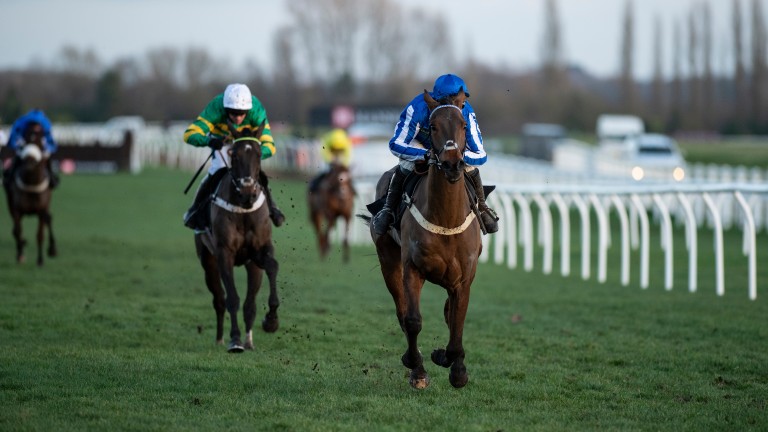 Your Darling: scored for the first time over hurdles
Edward Whitaker (racingpost.com/photos)
1 of 1
By Catherine Macrae 6:52PM, MAY 6 2021

Your Darling snatched a poignant win in the distinctive blue and white Vestey silks, landing the 2m novice handicap hurdle by a head.

The six-year-old claimed his second victory with Nico de Boinville, racing under the ownership of the late Lord Vestey’s children.

Lord Vestey, former chairman of Cheltenham racecourse and a stalwart of the sport, died in February soon after his wife Celia's passing.

Trainer Ben Pauling said: "He’s a lovely horse and has such fabulous connections who have had so much heartache in the last few months. He's now in the ownership of all the children, so it was a lovely way for him to get one back on the board and make everyone smile again."

Your Darling has taken time to find his way back to the winner’s enclosure since his impressive bumper success in January last year, after which Henrietta Knight, who purchased the horse for Lord Vestey, likened him to Best Mate.

Pauling was more measured with his expectations, saying: "He’s got loads of ability and I know he’s got a future, but we’ve won a handicap in May around Huntingdon. It’s not the Gold Cup by any stretch of the imagination.

"He’s a chaser through and through, so hopefully this is just a stepping stone to bigger and better things next season."

Kloud Gate found a dramatic change of form to take the 2m3½f handicap hurdle after trailing in last in his previous three runs.

The 14-1 shot secured his first success since December 2018 for Gary and Jamie Moore, a far cry from his 53-length defeat in his previous race.

FIRST PUBLISHED 6:52PM, MAY 6 2021
He?s a lovely horse and has such fabulous connections who have had so much heartache in the last few months