Talk of the Tracks NEWBURY SATURDAY 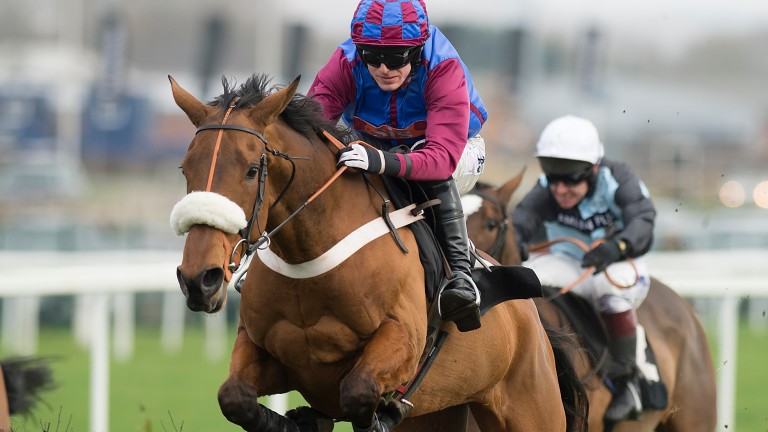 Warren Greatrex, who has a second strong candidate for the Cheltenham race in mud-lover The Nipper, said: "La Bague Au Roi has proved she's pretty smart, and the second was only just beat in the mares' novice last season, and so that's where we're heading.

"It's not ideal to keep leading, because I'm not sure she does a lot in front, but if you see the size of her she doesn't want a crawl. She's just very good. After three quick races she'll have a break and come back in the spring."

Ladbroke plan for Who Dares Wins

Alan King had endured a couple of near-misses this weekend but sported a huge grin after Who Dares Wins landed the Gerry Feilden.

The four-year-old had unseated on his last appearance when fancied at Cheltenham but put things right with a commanding performance.

"That's lovely," said King. "He wants a strong gallop and I don't know what happened at Cheltenham, but he's schooled well since.

"I'll see what the handicapper does on Tuesday but we'll think about the Ladbroke at Ascot." 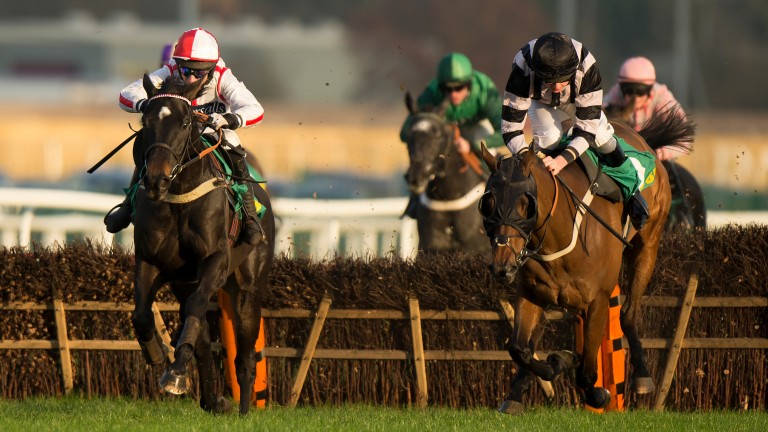 Who Dares Wins (left) ahead of third-placed Makethedifference in the Gerry Feilden Hurdle
Edward Whitaker
Winning owner Henry Ponsonby, who has an encyclopedic knowledge of the programme book, suggested the Betfair Hurdle at the track in February could also be an option.

"He's a cracking horse," said Ponsonby, who will soon be on his travels as his Flat ace Scarlet Dragon, who had been pencilled in for a juvenile hurdling campaign with King, has been invited to Doha for the Qatar Derby next month.

Tom George's decision to appoint Adrian Heskin as his stable jockey has already reaped plenty of success and more came with O Maonlai, who went one better than last year in the Sir Peter O'Sullevan Memorial Handicap Chase.

"It's great when a plan comes off because he's not easy," said the trainer, who paid tribute to his young rider.

"It was a great ride because if you ride him too close to the pace he's too keen and he can lose interest if you drop him out."

Heskin, riding his first winner at Newbury, said: "Tom's an easy man to ride for and it's working out well."

In The Rough, whose jockey Barry Geraghty wore O'Sullevan's colours after the legendary broadcaster left them to owner JP McManus, could manage only 13th.

Fitz all smiles after syndicate success

Mick Fitzgerald was on Channel 4 duty yesterday but had to break away from the broadcast to collect the winning prize following Onefitzall's victory in the 2m4½f handicap hurdle. 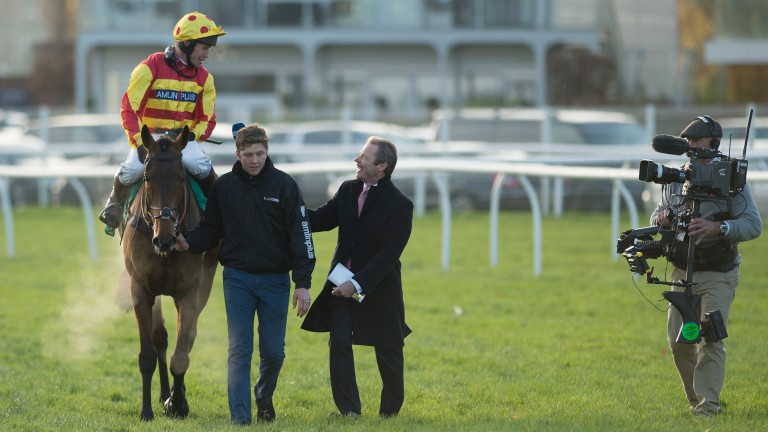 Mick Fitzgerald, on Channel 4 duty, welcomes back his syndicate horse Onefitzall
Edward Whitaker
The six-year-old, who is trained by Philip Hobbs, runs in the colours of the Mick Fitzgerald Racing Club, whose members crammed into the winner's enclosure.


The former top jockey confirmed the horse was named after him, while Hobbs said: "He ideally wants further and more testing ground. He managed that today but would be more effective on slower ground. He'll jump fences, but we'll look at the Pertemps series first."

Colin Tizzard is a growing force and talk of the trainers' title finding its way to his Dorset base should not be dismissed.

FIRST PUBLISHED 6:53PM, NOV 26 2016
After three quick races she'll have a break and come back in the spring