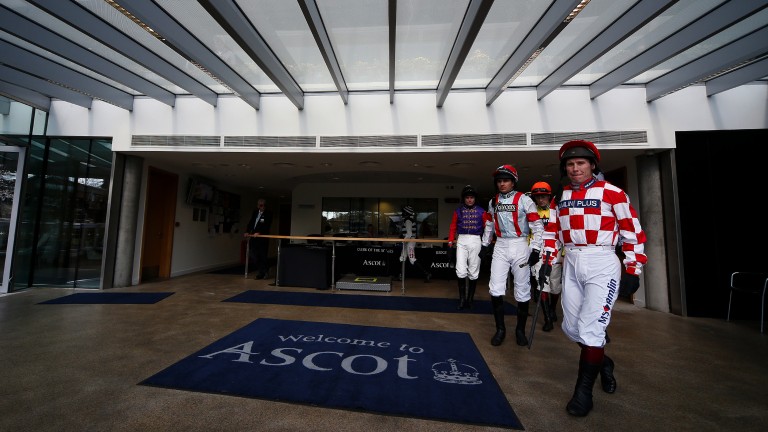 Ready to go: Richard Johnson leads the jockeys out of the weighing room before the opener
Getty Images
1 of 1
By Stuart Riley 6:00PM, MAY 12 2017

Imagine walking into your office and seeing Paul Hanagan or Sam Twiston-Davies sitting at your desk.

In the modern workplace hot-desking is deemed a necessary evil of cost-cutting and it is a practice that will make a rare appearance in the Haydock weighing room as the Flat and jumps contingents converge in a battle of the pegs.

You do not become champion jockey by ceding position easily and neither Paul Hanagan nor the weighing room's elder statesman Franny Norton will be allowing early arrivers to steal their peg.

"Not in this world," was Norton's response to potentially losing his peg. "I'm always by the door as I'm the next one out. We'll keep things clean in case any of them get any ideas."

Hanagan, too, does not expect to have to move from his usual position, but admits it is a day he is a day he looks forward to. "I quite enjoy it, it's very rare we see the jumps boys and it's nice to catch up," he said.

"I love my jumps racing and to be in and around them, I enjoy it a lot. When we come back complaining we didn't get the best of runs and then you see some of the falls they take over jumps you think we should stop moaning about stupid little things like that.

"As you get older your peg gets nearer the door and I was looking at who's riding there and I think there'll be a few of us nearer the door! I won't lose any sleep over a jump jockey trying to sit at my peg!"

"We're completely different breeds and we only really get to mix on days like this and the Lesters. It's nice to see them as it's very rare we get together. It's almost two completely separate sports in that way."

Leading jumps jockey Twiston-Davies does not expect to have to get his hands dirty, but not because he is giving up his slot, rather because he is sending his valet early to do his bidding.

"It's a little but different but at the end of the day everyone's there to do their job so everyone will have their head in the paper studying the form," he said of walking into a mixed weighing room.

"It's quite fun and it's always good to catch up with the other boys – hear a few of their stories and tell them a few of ours – it's always nice. A lot of us will be heading off after the Swinton to get down to Warwick so I don't imagine it'll be too congested.

"The valets will get there early and have a jostle and a fight for us and then we just turn up and sit where our stuff's hung up."

FIRST PUBLISHED 6:00PM, MAY 12 2017
The valets will get there early and have a jostle and a fight for us and then we just turn up and sit where our stuff's hung up