Weld confirms The Grey Gatsby on schedule for comeback 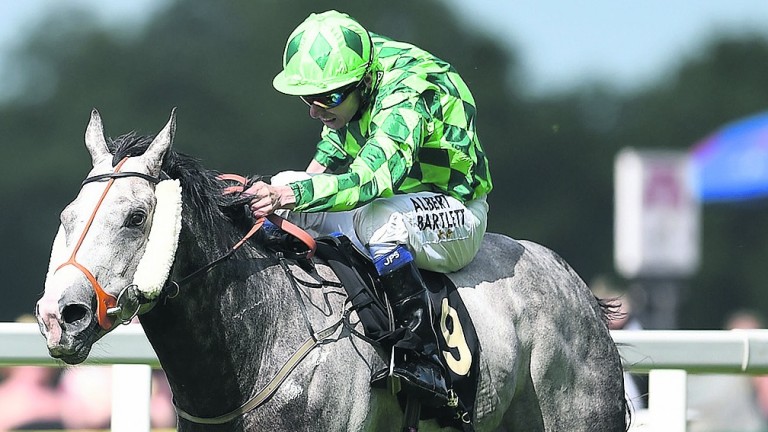 The Grey Gatsby is likely to have his first run since joining Dermot Weld in either the Prince of Wales’s Stakes or the Hardwicke Stakes at Royal Ascot.

The dual Group 1-winning six-year-old won the Prix du Jockey Club and the Irish Champion Stakes in 2014 when trained by Kevin Ryan and has not run since finishing fifth behind Almanzor in the Champion Stakes at Ascot last October on his final start for Ryan.

Speaking on Friday, Weld, who has sent out 17 Royal Ascot winners, reported: “The Grey Gatsby had a couple of slight hold-ups during the spring but he's in good form now and hopefully those little problems are behind him.

“He worked over a mile with two others yesterday. Pat Smullen rode him and we were very pleased with how things went.

“The plan is to send him to Ascot, where he'll run in either the Group 1 Prince of Wales’s Stakes or the Group 2 Hardwicke.”

The Grey Gatsby, who will need supplementing to the Hardwicke, has twice run in the Prince of Wales’s, losing out by a short head to the Weld-trained Free Eagle in 2015 and finishing fourth behind My Dream Boat a year ago.

FIRST PUBLISHED 3:58PM, JUN 9 2017
He worked over a mile with two others. Pat Smullen rode him and we were very pleased with how things went

'I think he's a huge price' - leading trainers on their Jersey contenders 'He's a horse we like a lot' - Roger Varian could hold key to big-field handicap Watch soon: live Royal Ascot preview show featuring Tom Segal and Paul Kealy Royal Ascot tips: five horses to back on the final day of the royal meeting Royal Ascot day five tips: Paul Kealy's banker Dream Of Dreams to dominate in bid to go one better? Graeme Rodway has his say