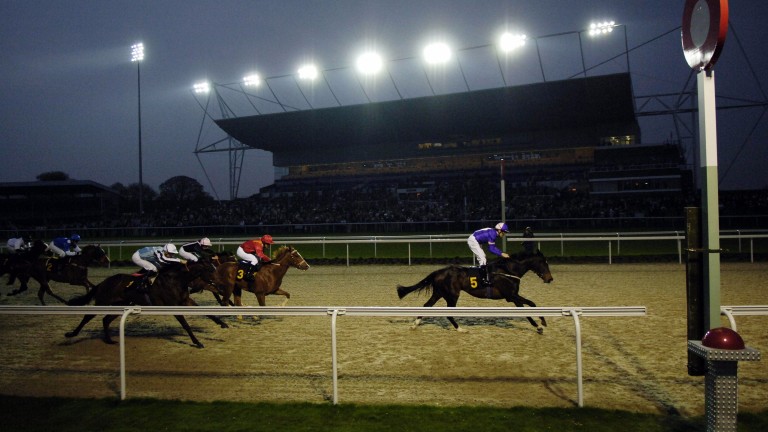 Kempton has become something of a Bermuda Triangle for the weird and wacky in racing
Edward Whitaker (racingpost.com/photos)
1 of 1
By Keith Melrose 7:50PM, JAN 13 2017

Though it is never likely to be put on the list of reasons against its proposed closure, few courses have borne witness to as many wacky episodes in recent years as Kempton. Here we recount some of the most shocking and bizarre moments to take place on what Mark Johnson once memorably called 'The avenue of heroes'.

Santa pays a visit, December 2004
The 2004 King George was over before two out. The upstart Kicking King had cuffed Azertyuiop, who was having his first run at three miles and since that Tingle Creek, and whose main concern by that point was fending off Kingscliff for second. What followed pricked the serenity like the killer being introduced in a slasher movie.

Kicking King's X-rated error at the last probably remains the finest example of the genre, despite Kauto Star's best efforts, but you might have been forgiven for being so engrossed in the finish that you missed the kicker, at least on first viewing. Once you see Santa Claus diving under the rails to avoid the leader as he hangs left, it's hard to think of the race any other way. 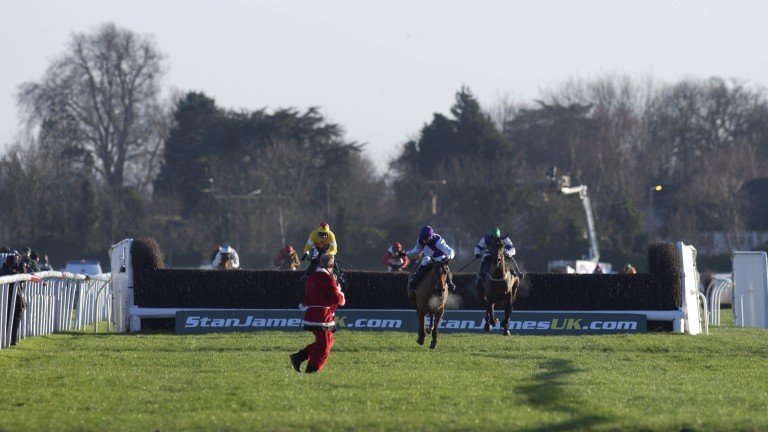 Santa Claus strays on to the course during the 2004 King George
Edward Whitaker (racingpost.com/photos)

Apprentice fiasco, March 2008
Josephine Bruning, hand over mouth in amused embarrassment, came back into the winners' enclosure after her maiden success on Sol Rojo, her promised 15 minutes ensured.

She had been allowed by the three others apprentices in a 1m4f handicap to go 25 lengths clear on the hard-pulling outsider. They thought the horse had run away with her. Yet they failed to recognise that they were on the final circuit, and realised too late.

Sol Rojo won by 16 lengths, then went on a lap of honour with Bruning helpless on top, at least proving the other three right up to a point. 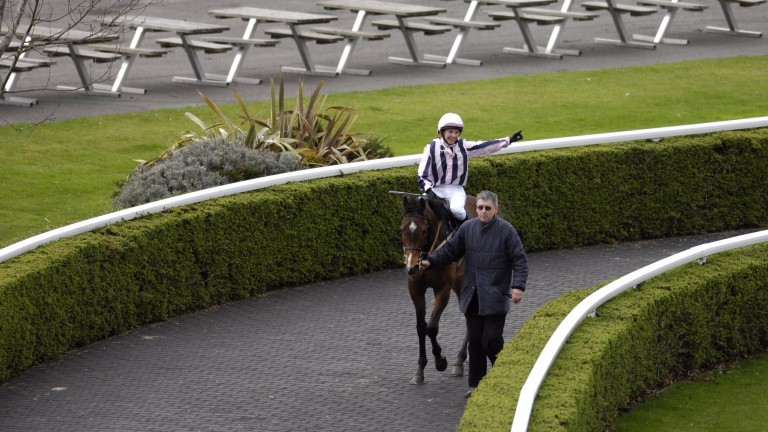 Horse in the lake, January 2009
The John Best-trained Blue Warrior, ahead of his debut on a midwinter Wednesday night, broke through the stalls, crashed through the barriers and wound up in the course's lake, in total darkness.

Confusion reigned, not least for those watching at home, but the horse was eventually coaxed out by stalls handlers doing an admirable impression of a team of lifeguards. 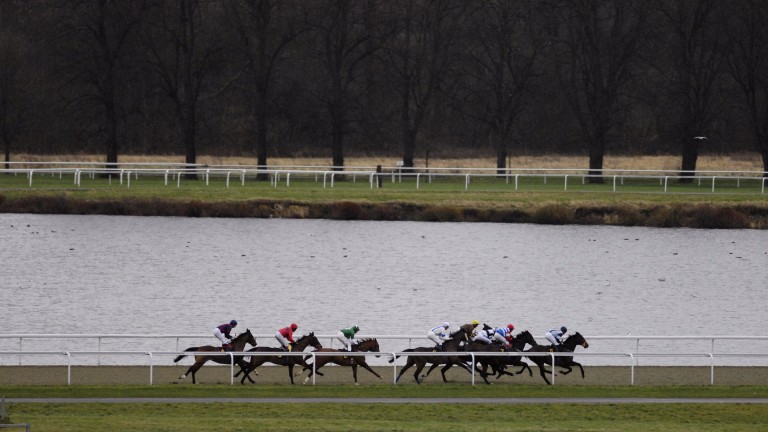 Runners pass by the lake at Kempton
Edward Whitaker

Race set to music, July 2009
The Royal Philharmonic Orchestra picked the right track to play over the digibet.com Handicap, Rossini's unmistakable William Tell Overture, but if they could have chosen they would surely have picked just about any winning rider other than Ryan Moore. Asked about the initiative afterwards, the ever-saturnine Moore could only bring himself to complain that the music caused his mount to jink.

Man versus horse, June 2010
Those who remembered Jamie Baulch as an Olympic medal-winning athlete might have wondered why he challenged racehorse Peopleton Brook to a race over 100m, rather than his preferred 400m. The answer was soon pretty clear, as the 58-rated sprinter, three starts from retirement as it turned out, beat him on the bridle.

"Horse beats man," said commentator Jim McGrath, almost managing to sound drawn in by the charade, which was at least run in the name of charity.

Hughes quits in protest, October 2011
Now we are far enough down the road to laugh about it, we can hopefully all agree that the defining moment of the autumn 2011 whip controversy came on Champions Day, when Champion Stakes-winning rider Christophe Soumillon attempted to cadge a taxi fare from Nick Luck on live television.

At the time, it felt as though something much greater was at stake. Richard Hughes, after receiving a ten-day ban for breaking the seven-strike barrier for a second time, handed in his licence, saying "It's like telling Lionel Messi not to use his left foot." That seems overwrought now, perhaps, but his actions along with the Soumillon debacle did most to force a vital softening from the BHA the following month. 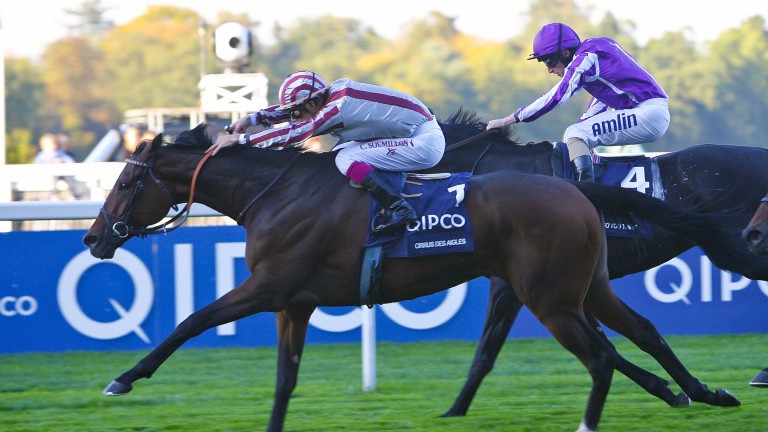 Smith calls it wrong, June 2013
In his 13 years as a racecourse judge, Dave Smith gained minor notoriety from calling the result of a close finish even before all the 1.01 had been hoovered up on Betfair.

Barring superhuman abilities, the law of averages dictated that Smith was going to come unstuck at some point and it happened at Kempton when Extra Noble and Fire Fighting passed the post in unison in a seven-furlong maiden.

It took a remarkably quick 50 seconds for Smith to declare a dead-heat, but five days to decide that, actually, Extra Noble had won by a nose. He was subsequently relieved of his duties as a judge by the BHA.

Swans on the track, May 2014
If the swans that once took residence at Kempton Park were still there, perhaps the Queen could legitimately add her opposition to the site's proposed development. As it is, they left not too long after this incident in an amateur riders' handicap hurdle, in which Dark Energy tripped over a straggler and unshipped Harrison Beswick.

Beswick subsequently lost the ride on Dark Energy, which seems a bit unfair. 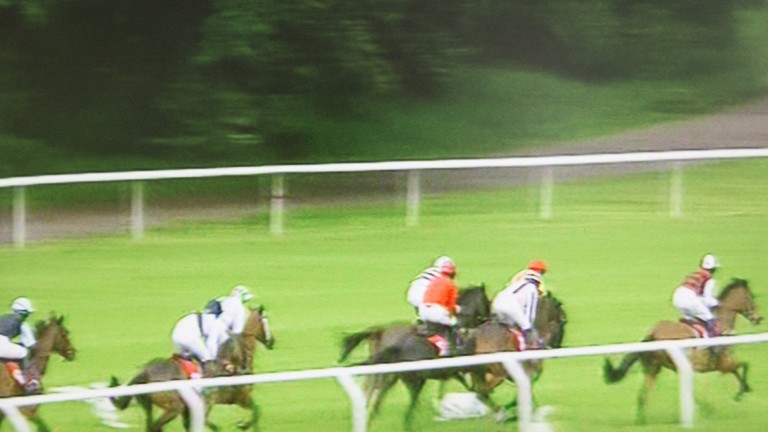