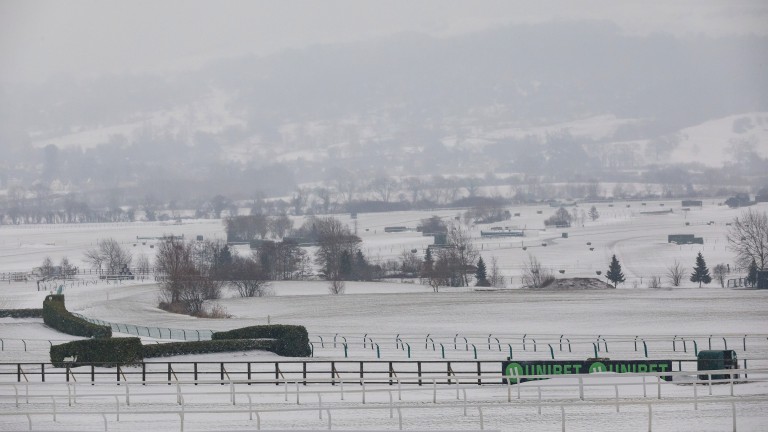 Significant quantities of snow have accumulated around the course at Cheltenham
Jonathon Watkins / Photoglow Photography
1 of 1
UPDATED 5:40PM, MAR 4 2018

The going description for the Cheltenham Festival, set to get under way in ten days’ time, could feature the word ‘heavy’ in the run-up to the meeting.

That was the message yesterday from clerk of the course Simon Claisse, who also estimated there may be more than 200 tons of snow to remove manually from the course.

Speaking just before 1pm, Claisse provided an update on the ground, which had been left covered by snow after the storms that have battered Britain in recent days. He said: “The sun tried to poke through this morning, but it’s become very grey and murky now. The thaw is just beginning to start and the temperatures are just a couple of degrees above freezing.

“It could possibly get a bit milder this weekend and then into next week. I think the ground will be soft when the snow melts, but it’s hard to tell at the moment while it’s still thawing. We think the snow will have amounted to about 12mm and the forecast is showing it could be 15mm of rain by next Sunday.”

Asked if that meant ‘heavy’ would enter the official going description before the meeting, Claisse – whose groundstaff will be swelled by around 40 to 50 extra workers to help move the snow next to the fences and hurdles – replied: “It’s possible, yes.”

Even with that strength in numbers the shovel-wielders may have their work cut out, with Claisse saying: “We think there could be 200-plus tons plus of snow to shift manually, where it has drifted up against the fences.”

Where those fences are on the cross-country course those drifts are between four and six feet deep in places, with Claisse observing: “Not only is that slower to thaw, but you’re depositing a lot of the precipitation in one place.”

FIRST PUBLISHED 6:50PM, MAR 3 2018
The sun tried to poke through this morning, but it's become very grey and murky now