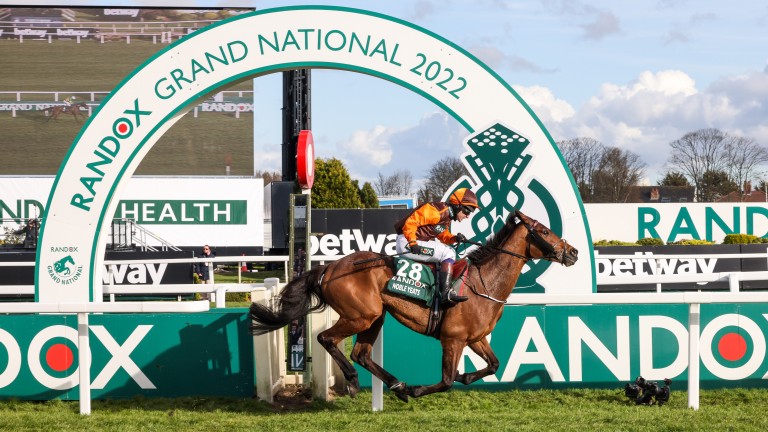 Noble Yeats: the 50-1 winner of the Grand National was a winner with bookies
John Grossick (racingpost.com/photos)
1 of 1
By James Stevens UPDATED 7:10PM, APR 11 2022

Bookmakers reported little decline in punting interest on the Randox Grand National, despite ITV's peak audience on the famous race dropping to the lowest figure since 2007.

Sky Bet took 1.2 million bets on the most popular punting race of the year, which is down by only around 1,000 from 2021 when betting shops were not open due to Covid-19 restrictions. The online firm reported a slight decrease in turnover.

Their numbers came as ITV Racing released television figures on Sunday showing the National's peak audience figure was 7.5 million. That was down from 8.8m last year and 9.6m in the pre-pandemic National of 2019 won by Tiger Roll.

The shock victory of 50-1 shot Noble Yeats attracted the smallest peak audience since the BBC's 2007 broadcast, but there were no signs of declined interest from the betting audience.

Sky Bet's Michael Shinners said: "This year we had 1.2 million customers bet with us on the Grand National, that's within a thousand or so of 2021. Essentially, we had the same amount as last year, which we're pleased with.

"What we have found is that stakes were slightly down, but we think that's due to a number of reasons, such as people having less disposable income at the moment.

"Our turnover was slightly down but maybe that's the cost of living, maybe people were on holiday with it being half-term for a lot of the country, so they didn't have a bet or much on. We were happy with the Grand National and how it's gone."

Betting shops welcomed customers for Grand National day for the first time in three years. Coral, one of the biggest names in the high-street betting shop market, were pleased with customer interest in the Grand National as it clashed with the weekend's other two main events, the US Masters and the Premier League title game between Manchester City and Liverpool.

Simon Clare, Ladbrokes Coral PR director, said: "Saturday was the most important day imaginable for betting shops and those who work in them, as it represented a return to normality after the huge impact of the pandemic."

"There was a celebratory feel out in the shops as millions of customers, many of whom bet only once a year on the Grand National, flocked to place their National bets on the high street for the first time in three years, and it was as if we'd never been closed.

"Turnover was great, our shop colleagues did an amazing job servicing the customers, and we definitely got a favourable result with Noble Yeats touching off the well-backed Any Second Now.

"It was a big weekend for digital too, with the biggest betting race of the year supported by the biggest betting football match of the season, in Manchester City v Liverpool, not to mention US Masters golf, and turnover was not surprisingly strong."

On-course bookmakers at Aintree described turnover as "very good" to the Racing Post on Sunday.

Read more on the Grand National . . .

Emmet Mullins: I don't know when Grand National win will sink in – it's unbelievable

The youngest winner since 1940 – how do we make sense of historic National?

FIRST PUBLISHED 5:36PM, APR 11 2022
What we have found is that stakes were slightly down, but we think that's due to a number of reasons, such as people having less disposable income