'We had some craic, it was mighty' - trainer celebrates by bringing horse to pub 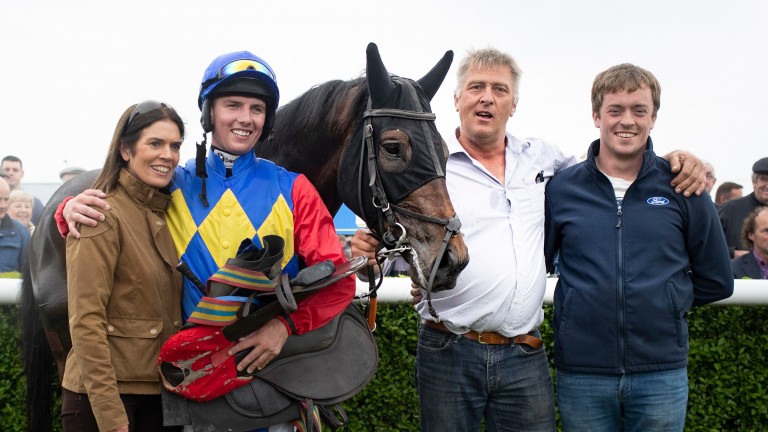 Tom Shanahan (second from right) with Charle Brune and winning jockey Donagh Meyler following the horse's victory at Tipperary on Thursday
Patrick McCann
1 of 1
By David Jennings UPDATED 8:56PM, MAY 26 2019

Did you hear the one about the horse walking into a bar? Of course you did. Everybody has. But the latest version is not a joke and there was no query from the barman about the long face.

On the way home from winning at Tipperary on Thursday, Ballinure-based owner-trainer Tom Shanahan brought six-year-old Charle Brune into his local for a few pints. But if ever there were a cause for a special celebration this was it.

That's how you celebrate a double, bring the horse with you, congrats Tom pic.twitter.com/n4FamgbuHm

Shanahan turns 54 next month and Charle Brune became his first winner at Wexford on Wednesday when he landed a 2m handicap hurdle by 23 lengths having been supported from 33-1 all the way down to 10-1.

A day later and Shanahan was celebrating his second winner as the Donagh Meyler-ridden Charle Brune defied a 6lb penalty to win another 2m handicap hurdle by eight lengths at Tipperary. No winner in 30 years as a trainer and then two in the space of 26 hours.

"Sure it's a once in a lifetime thing for me," said Shanahan. "I was on my way home from Tipperary and I told Maggie Ryan in the Horse and Hound pub in Dualla that I was coming in for a few pints and that I wouldn't be on my own. I told her the horse was coming in with me and that I wasn't taking no for an answer!

"There was a tiled floor in the pub and it was tricky getting him in through the doors but the horse trusts me inside out. I could start up a chainsaw beside him and he wouldn't budge, he has complete trust in me. We had some craic, it was mighty!" 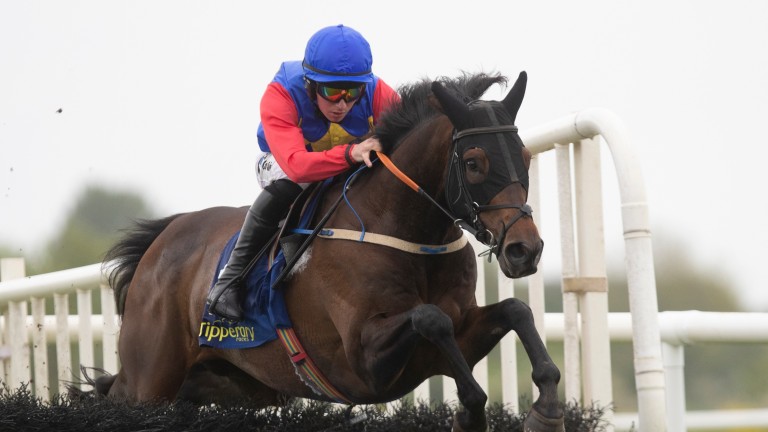 So, how did a seemingly moderate maiden with a rating of 87 manage to win two races in 26 hours by a combined total of 31 lengths?

"His body was always fine, but his head was wrong," explained Shanahan. "We needed to sort out his head. All he wanted to do was race, but the penny has finally dropped. I have sent him out hunting with hounds and it has worked. He's loving life. My son Bill has done a huge amount of work with the horse too so he deserves great credit.

"He has always jumped well. I have Mickey Mouse facilities so he started jumping over a telegraph pole – that taught him a lot."

Back to those celebrations, how long did they last?

"Well on Wednesday night I got to the Horse and Hound at about 8pm and left at 4am," said the trainer. "I got up and fed the horse and gave him a gallon of water and then went back to bed. He was in some nick. Thursday night was mighty craic. Something like this will never happen to me again. We had to make the most of it. I just had to bring him into the pub."

And, how much money did he make on the gamble? "I have amnesia, I can't remember! Let's just call it a right few quid!"

Charle Brune is not going to be with Shanahan much longer, however, as the six-year-old is destined for the sales the week after next. 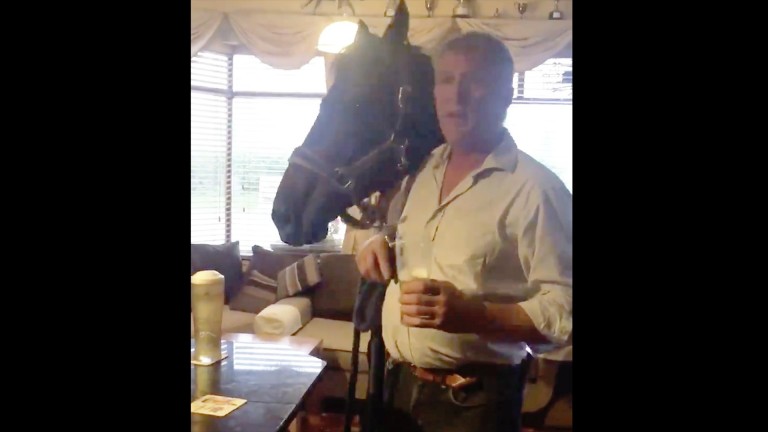 Tom Shanahan with Charle Brune in the Horse And Hound

"I'm going to miss him something shocking but I'm not Willie Mullins and don't have loads of money so he'll have to move on. He'll be some horse for whoever buys him. I could see him coming up the hill at Galway on his own. Now that his head is right, he could be anything," Shanahan said.

It was back to the day job for Shanahan on Sunday, cleaning drains.

"I run Spotless Drain Cleaning, so I'm off to clean a few drains. It's been some week. An unforgettable one. It will never happen to me again but, I'll tell you, I enjoyed every second of it."

FIRST PUBLISHED 2:42PM, MAY 26 2019
I told Maggie Ryan in the Horse and Hound pub in Dualla that I was coming in for a few pints and that I wouldn't be on my own