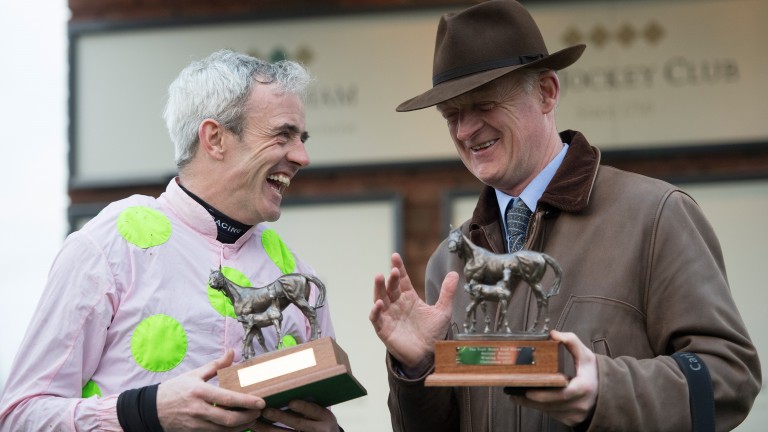 Alan King's former stable jockey is the tenth most successful rider in festival history, with 16 winners. Victories for My Way De Solzen (Arkle), Voy Por Ustedes (Champion Chase), Katchit (Triumph) and Andreas (Grand Annual) resulted in him being crowned the meeting's top jockey in 2007. He was the last British rider to do so. King Lucifer, in the 1997 Kim Muir when still riding as an amateur for David Nicholson, was his first – his second came in the very next race aboard Pharanear in the Pertemps – while Bensalem in the Stewart Family Spinal Research Handicap Chase in 2011 was his last. In between he won three of the big four, with the Gold Cup the only one to allude him. 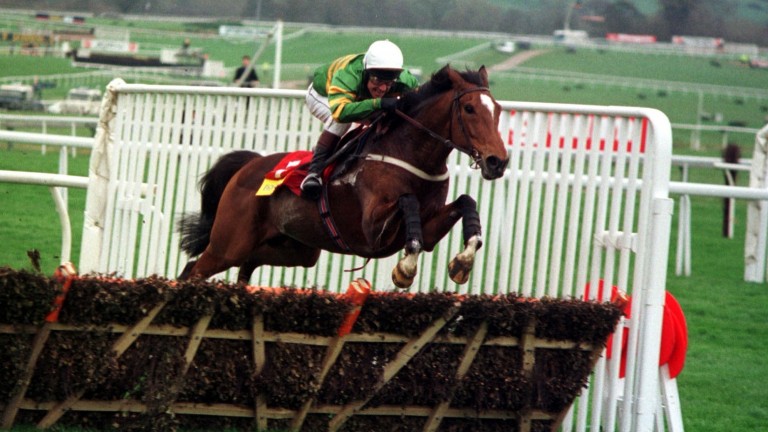 The nine-time champion jockey in Ireland rode his first festival winner in the 1990 Stayers' Hurdle on Trapper John. He was leading jockey at the festival twice, in 1993 and 1994 with four and three wins respectively. Viking Flagship's Champion Chase success (1995) took his tally of championship races to three – he won the Stayers' again in 1993 on Shuil Ar Aghaidh – and then along came Istabraq. The pair won at four successive festivals, adding three Champion Hurdles to their 1997 success in the Royal & Sun Alliance Hurdle. His final festival winner was Scolardy in the 2002 Triumph Hurdle.

The legendary Fred Winter now has a race named after him at the festival and he racked up 17 winners as a jockey before adding another 28 as a trainer. The four-time champion jockey counts two Champion Hurdles, aboard Clair Soleil in 1955 and Fare Time in 1959, and back-to-back Gold Cups in 1961 and 1962 on Saffron Tartan and Manderin among his many successes in the saddle. He remains the only person to have won the Gold Cup, Champion Hurdle and Grand National as a jockey and trainer.

Davy Russell's career has ebbed and flowed, but come Cheltenham in March he has always delivered. His first success came aboard Native Jack in the 2006 cross-country chase and since then he has ridden at leas one winner at every festival. In 2014 he had a magic Friday, winning the first and last races on the card aboard Tiger Roll (Triumph) and Savello (Grand Annual), and sandwiched in between was the biggest of all his Cheltenham successes when he partnered Lord Windermere to glory in the Gold Cup. 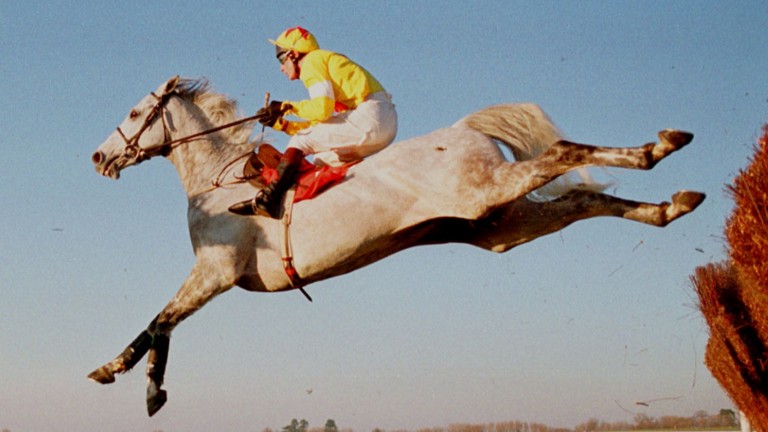 11: One Man and Richard Dunwoody in full flight at Cheltenham

The three-time champion jockey amassed 18 festival winners in a glittering career. He was the meeting's top rider in 1990 and 1996 with two winners at each. In 1985 he landed the Festival Trophy Handicap Chase aboard his Grand National winner West Tip and the Pertemps aboard Von Trappe, while in 1988 he won the Triumph on Kribensis, on whom he also won a Champion Hurdle in 1990 for Sir Michael Stoute, and the Gold Cup for David Nicholson on Charter Party. He won the Arkle on three occasions, on Waterloo Boy (1989), Remittance Man (1991) and Ventana Canyon in 1996.

Richard Johnson is well on his way to a third jockeys' championship and is currently the fourth most successful jockey in festival history with 22 winners. His first win came on Anzum in the 1999 Stayers' Hurdle. He won the Gold Cup on Looks Like Trouble the following year and 2002 Flagship Uberalles, in the Queen Mother Champion Chase, was one of two winners that resulted in him finishing as top rider. Victory on Rooster Booster in the 2003 Champion Hurdle completed his set in the four championship races. He rode two winners at last year's meeting, Flying Tiger in the Fred Winter and Defi Du Seuil in the Triumph.

Another nine-time Irish champion jockey whose career was inextricably linked with one horse, Pat Taaffe is the most successful jockey in the history of two of the festival's four championship races with four wins in the Gold Cup and five in the Champion Chase. Three of those Gold Cup successes came aboard the mighty Arkle, in 1964, 1965 and 1966, while he also won the race aboard Fort Leney in 1968. Taaffe also saddled Captain Christy to win the race, but it was as a jockey he did most of his winning at the festival and his five wins in the Queen Mother came courtesy of Fortria in 1960 and 1961, Ben Stack in 1964, Flyingbolt in 1966 and Straight Fort in 1970. He is also the winningmost rider in the RSA Chase's history with five victories. 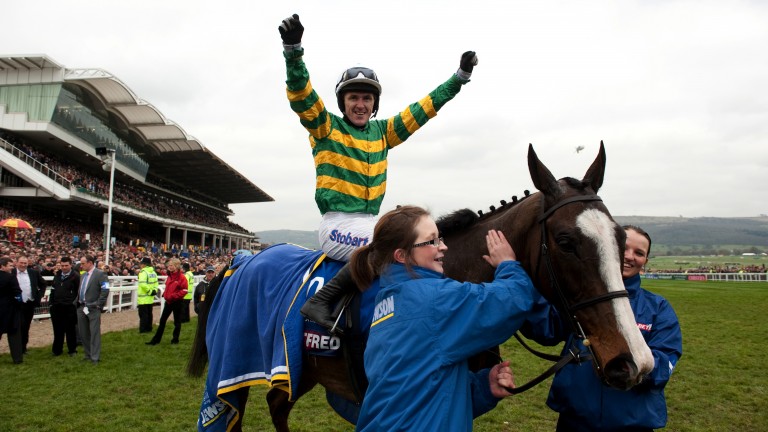 Tony McCoy made a thing of winning as many races as possible in his 20-time champion jockey career and a staggering 31 of them came at the festival. His first success came on Kibreet in the 1996 Grand Annual and his last came in the 2015 Ryanair aboard Uxizandre. In between he was leading rider at the meeting in 1997 (three) and 1998 (five), while he won three Champion Hurdles – Make A Stand (1997), Brave Inca (2006) and Binocular (2010) – a Champion Chase aboard Edredon Bleu in 2000 and two Gold Cups – on Mr Mulligan in 1997 and Synchronized in 2012. The Stayers' Hurdle was one of the few major prizes to allude McCoy in his unrivalled career.

Barry Geraghty took over from Tony McCoy in the famous green and gold silks of owner JP McManus, and the leading rider at the 2003 and 2012 festivals is still looking to add to his impressive tally of 34. His first festival winner was none other than Moscow Flyer in the 2002 Arkle, and he has ridden at least one winner at every festival since until missing last year's through injury. In that time Geraghty has won two Champion Hurdles on Punjabi (2009) and Jezki (2014); five Champion Chases on Moscow Flyer (2003 and 2005), Big Zeb (2010), Finian's Rainbow (2012) and Sprinter Sacre (2013); two Stayers' Hurdles on Iris's Gift (2004) and More Of That (2014); and two Gold Cups on Kicking King (2005) and Bobs Worth (2013). He has also won more Arkles (four) and Triumphs (five) than any other rider. 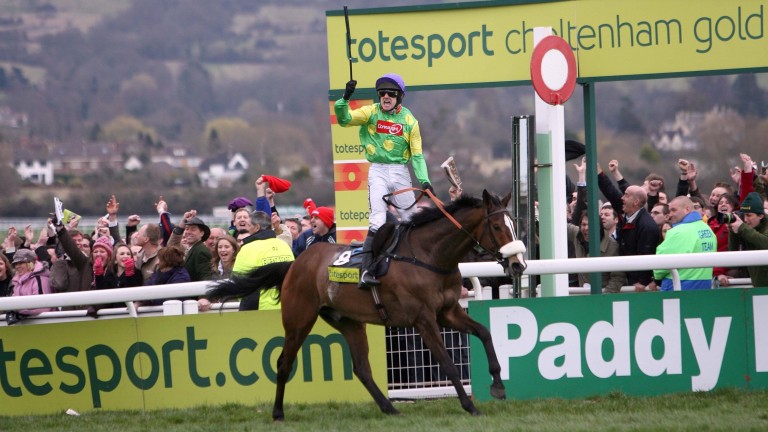 If Barry Geraghty and Richard Johnson combined their Cheltenham Festival tallies they would merely match Ruby Walsh's, such has been his phenomenal record at the meeting. He won his first aboard Alexander Banquet in the 1998 Champion Bumper and since 2002 one winner has been his worst return from a festival – and that last happened in 2003. Since 2004 he has been the meeting's leading rider 11 times, with four Champion Hurdles, three Champion Chases, five World Hurdles and two Gold Cups. He has also won five Supremes, three Arkles, seven Mares' Hurdles, four Ballymores, two RSAs, three JLTs, both editions of the Dawn Run and the County Hurdle on four occasions.