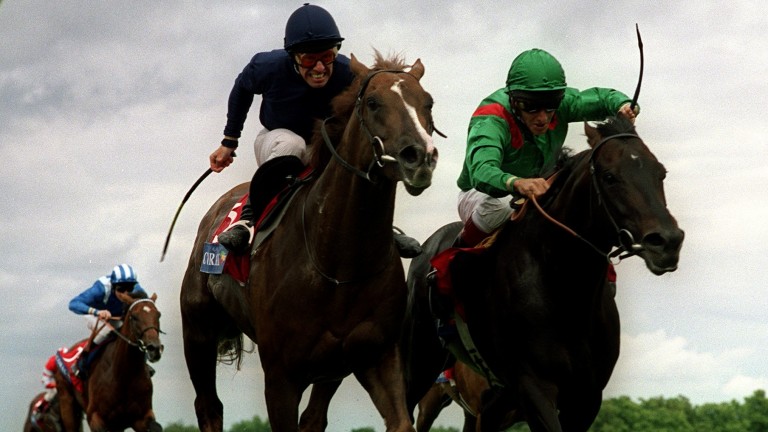 George Duffield on Wednesday described Giant's Causeway as a horse that "just wanted to win" as he recalled their memorable victory over Kalanisi in the 2000 Coral-Eclipse Stakes.

The Iron Horse met the iron jockey when the pair teamed up for one race only because of a back injury to Aidan O'Brien stable jockey Mick Kinane.

Giant's Causeway, whose death at stud in the United States was announced by Coolmore on Tuesday, was stepping up in distance for the first time after finishing runner-up in the 2,000 Guineas, Irish 2,000 Guineas and winning the St James's Palace Stakes.

Duffield said: "I had won the Racing Post Trophy for Aidan the year before and finished third in the Irish Derby so had had a few rides for him. Unusually for me I was offered three rides in the Eclipse. Aidan said if Giant's Causeway runs would I stand by and wait for him, and I said yes.

"It was a funny race because the pacemaker got left behind. It didn't affect me because I was told be prominent, make plenty of use of him and set sail whenever I felt happy anywhere up the straight.

"The pacemaker did take it up after a while but Richard Hills managed to sneak up my inside on Sakhee and took it up. I remember hearing a big cheer when Sakhee hit the front because he was favourite. I went with him. I never felt challenged. I had a lot of horse underneath me and knew I would find far more than him, which I did.

"Then Pat Eddery came out of the blue on Kalanisi and just headed me inside the last furlong but Giant's Causeway, being the horse he was, wanted the race so much he went back and beat him."

At the end of an epic duel over the final furlong Giant's Causeway won the photo-finish verdict by a head with both Duffield and Eddery receiving ten day whip bans. 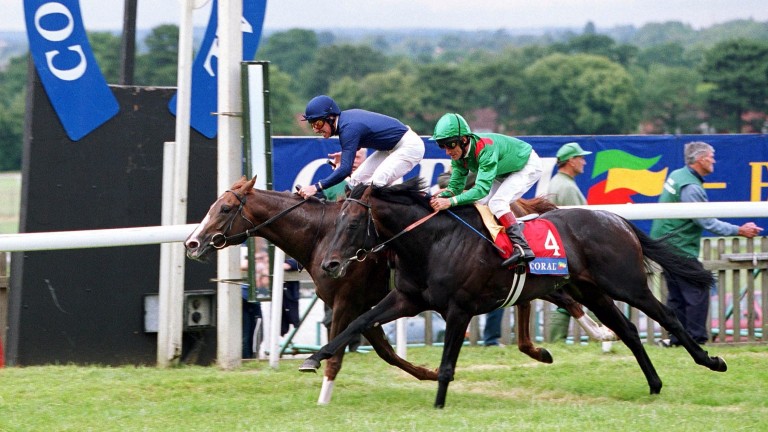 Giant's Causeway (left): fought out a finish in the 2000 Coral-Eclipse with Kalanisi
Cranham Gerry

"There is nothing like a race like that Eclipse to get the blood boiling, a close finish with two horses having a proper set-to and the best horse wins," said Duffield.

"I was always extremely competitive myself. I hated getting beat in any race, be it a seller or a Group 1. We both wanted it an awful lot and it came off for both of us.

"It was a great day and he was a really good horse, a proper horse. I remember saying to Aidan, 'He's probably not going to be the best you will ever train but he will probably be the most competitive'. He just wanted to win. That's what made him so good. Not just having the ability but the mentality and a big heart to want to compete and to win."

The Eclipse was the only one of Giant's Causeway's six Group 1 victories that Kinane missed out on.

Kinane said: "They called him The Iron Horse and that was very apt. He was tough as they come and always had something in the locker. He was special – a hell of a good two-year-old and a very good three-year-old who went on to become a great stallion."

FIRST PUBLISHED 6:22PM, APR 18 2018
I never felt challenged. I had a lot of horse underneath me and knew I would find far more than him, which I did