Watson dreaming of an Absolute Blast on finals day 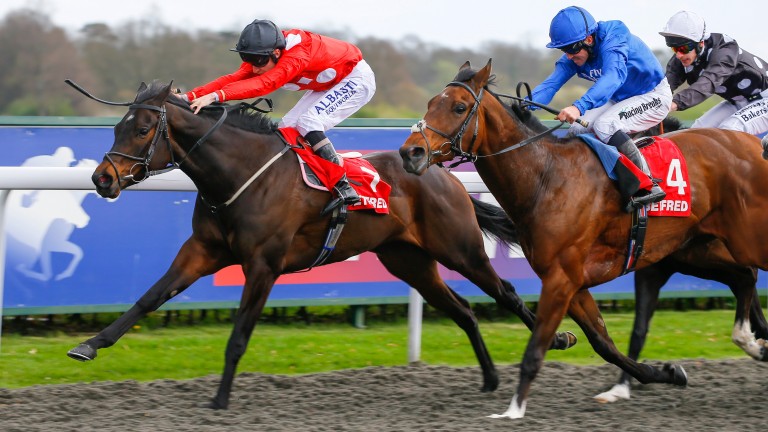 It's a big day for Lingfield, but it's arguably an even bigger one for Archie Watson, who just two months after acquiring Absolute Blast and less than eight months after sending out his first runner has a very real chance of landing the £200,000 feature event.

Watson, who trains from Saxon Gate in Lambourn and has his team in flying form, agreed: "It's a big day for us. There's a lot of money on the table and it's a great opportunity for a first-season trainer like me on a card like this.

"We'd had our eye on Absolute Blast for a while and did a deal privately. She's a very talented filly and we've already got black type with a Group 3 place and a Listed win. The idea is to carry on and get a Group win on turf."

Convey had Absolute Blast in third when a course and distance winner of the Group 3 Winter Derby, and punters will be looking to Ryan Moore to repeat the tactics successfully adopted by Andrea Atzeni that day.

However, while the step up in trip appeared to suit Sir Michael Stoute's five-year-old, who was racing for the first time since he was acquired by Robert Ng and gelded, Absolute Blast is weighted to turn the tables with the more generous weight-for-sex allowance.

Standing dish
Last year's winner Grendisar, third to Tryster the year before, has yet to miss a Championship Good Friday.

Jockeys merry-go-round
Silvestre De Sousa gets the leg up on Grendisar for the first time, replacing regular rider Adam Kirby, who switches to Battalion, a horse he has never ridden before.

Didier Prod’Homme, co-trainer of Allez Henri
He tends to be caught between the big handicaps and Listed level and he loves races with pace in them. He can make the running if necessary but I don’t see that being the case here as there is usually pace on at Lingfield. I think he's in better form than for his last run.

Jamie Osborne, trainer of Battalion
He threw his chance away by sitting back in the stalls last time, but we've done a lot of work with him and if he jumps out somewhere near this time and they go a good pace he'll hopefully have a proper chance.

Marco Botti, trainer of Grendisar
Things haven't gone his way this winter and he hasn't quite run to his best. I don't think the blinkers made any difference last time so we are back to cheekpieces. He's in good form at home, but he's a bit of a character and whether he's in the mood or not, we'll see.

Pia Brandt, trainer of Metropol
His last run was over too short a trip but we wanted to give him an outing to get his confidence back after not running very well the time before. His rating isn’t quite as high as last year but he seems just as well in himself as he did then and he much prefers Lingfield to any racecourse in France.

Richard Fahey, trainer of Third Time Lucky
After winning well at Wolverhampton he was a bit fresh when down the field in the Lincoln. We're stepping him up in trip.

Archie Watson, trainer of Absolute Blast
She was very progressive all winter for Iain Jardine and she's continued progressing for us. She deserves her place in the market, and at face value, getting 2lb more from Convey this time, she ought to be bang there.

Andrew Balding, trainer of Elbereth
She won the fast track qualifier at Dundalk and has done nothing but improve. A mile and a quarter round Lingfield might not play to her strengths, but she's in fine fettle.