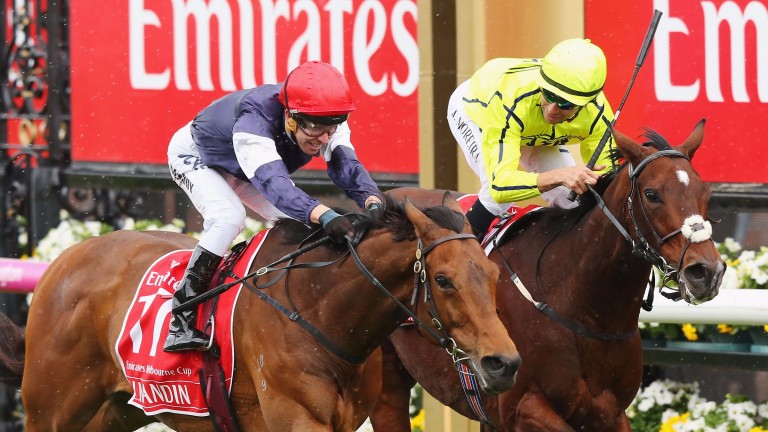 Tony Martin's Heartbreak City is out to prove that he is equally as effective over hurdles than he is on the Flat
Michael Dodge
1 of 1
By Brian Sheerin 3:58PM, JAN 21 2017

He has been billed as a handicap 'good thing' but eight flights of hurdles stand in the way of Heartbreak City as he bids to translate his superb Flat form to jumps races this afternoon for Tony Martin and Donagh Meyler.

A desperately close runner-up in the Melbourne Cup when last seen, Heartbreak City is back on home turf as he chases this €100,000 prize off a potentially lenient hurdles mark of 125.

Martin also sends Golden Spear, Gladiator King and Tudor City into battle but all eyes will be on Heartbreak City as he bids to prove he is just as effective over hurdles as he is on the Flat.

If that is the case, we could be dealing with a potentially classy jumping prospect. Time will tell.

Look beyond the favourite

This race has been very tricky for punters in recent history. The only winner in the past 10 runnings to have started shorter than odds of 10-1 was Final Approach [6-1] in 2011. It may pay to look beyond the market leaders.

Shark’Hanlon, trainer of Hidden Cyclone
He ran a cracker in the Fighting Fifth Hurdle at Newcastle and I have been thrilled with him ever since that run. It will be difficult off top weight for him but Rachael [Blackmore] takes 5lb off his back and that will be a help. He's not getting any younger but he's in top form.

Willie Mullins, trainer of Allblak Des Places, Thomas Hobson, Cap D’Aubois and Noble Inn
Ruby has opted to ride Allblak Des Places in this. He was one of the very few who disappointed us over Christmas when he was well beaten at Limerick. I think he is much better than that. We haven't seen much of Thomas Hobson this season following his fruitful campaign last term and the worry that I would have is the 2m trip. He might want a bit further. Cap D'Aubois bumped into a really good mare at Limerick in the shape of Missy Tata, and if she can improve a bit from that run, she could have place prospects. Noble Inn ran over three miles at Christmas and is back over two miles now but I doubt that he will be one get into the money. We are more hopeful than confident with him.

Tom Mullins, trainer of That's A Wrap, Sir Scorpion, Grand Partner and Top Othe Ra
All four of mine are in good form. That's A Wrap got Ruby [Walsh] out of a bit of bother here the last time when he flew home to win narrowly. I thought he would have been an unlucky loser and he is probably well handicapped still because he didn't win by a few lengths. If he holds his form he should give a real good account. Sir Scorpion would have his chance as well. Better ground will suit him and he was bang there when he was brought down at Fairyhouse when it looked like JP McManus's other horse, Campeador, was going to win. I would like to think we would have been second if both horses had stood up and I think that was the most competitive handicap hurdle to be run in Ireland this year. Grand Partner and Top Othe Ra are in there with a good shout as well.

Tony Martin, trainer of Heartbreak City, Golden Spear, Gladiator King and Tudor City
Heartbreak City is in great form and hopefully he can prove as good over hurdles as he was on the Flat. My only worry is that he had a long season, and while we have freshened him up for this, I would have liked to have gotten a bit of sun on his back. He’s ready to rock, though. Golden Spear is in with a good chance as well and he ran well in defeat at Ascot the last time and deserves another crack at a pot like this. Gladiator King has been knocking on the door and Tudor City is another one who has been running really well lately and could run a big race if things fall his way.

Gordon Elliott, trainer of Veinard
He’s in real good form but it goes without saying that he will need a bit of luck in running. We are looking forward to a nice run.

Jessica Harrington, trainer of Light That
He didn't have much luck last time behind That's A Wrap. Even though he doesn't have a lot of experience, he is in good form, and I am hopeful he can run a nice race.

FIRST PUBLISHED 6:00PM, JAN 21 2017
Hopefully he can prove as good over hurdles as he was on the Flat