Ward happy Fool is primed to have him smiling again 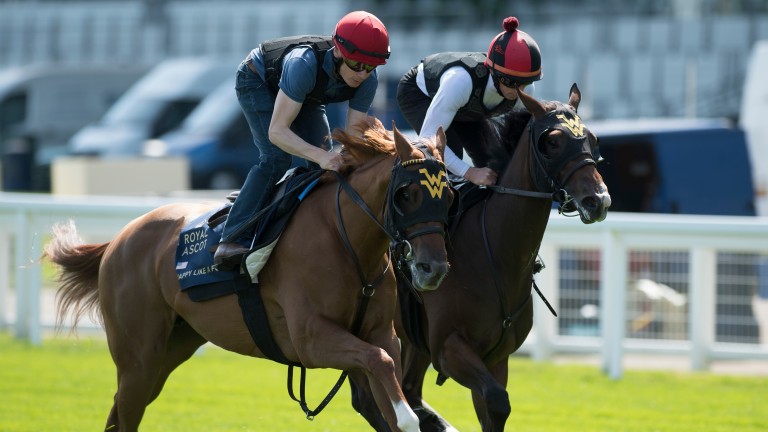 Wesley Ward is on a hat-trick in the first juvenile test of the meeting exclusively for fillies with Happy Like A Fool and there aren't too many around who remember the last one as it was back in the 1930s.

That trio, Supervisor (1932), Maureen (1933) and Caretta (1934) were trained by the legendary Fred Darling, who still holds the record for most wins in the five-furlong dash with seven victories.

Ward, who has won the race three times with Jealous Again (2009) and more recently Acapulco (2015) and Lady Aurelia a year ago, is still well shy of Richard Hannon snr, who landed it five times, most notably with the flying Lyric Fantasy (1992).

All roads lead to Ascot for the likes of Happy Like A Fool, who hasn't turned a hair since arriving at her temporary base at the National Stud in Newmarket on June 6.

Ward said: "She worked well and won her race at Keeneland well before she got on the plane and she's great – doing super. She had a big work last week with Jamie Spencer and came out of that great. She's just cantered since but is in great shape. It's exciting."

Cox: it's not a one-horse race

Clive Cox won the colts' equivalent, the Norfolk Stakes, with Reckless Abandon in 2012 and reckons he has his best chance of landing the Queen Mary for the first time with Heartache, who is taking a big jump up from scoring on her debut at Bath.

Cox said: "We were very impressed with her debut win at Bath and the clock confirmed it. We're drawn close to the pace [Happy Like A Fool] and we couldn't be happier."

Jarvis back in the big league

William Jarvis has had a course and distance rehearsal with his hope Mrs Gallagher and no-one has complained one bit about it.

The Newmarket trainer is hoping to get back in the big time with the daughter of Oasis Dream, who is a big-ticket item in his string at 140,000 guineas. He said: "You could say we've done a Wesley Ward and had a prep on the track already as she won there in May.

"Silvestre de Sousa gave her a fine ride that night and he's been in to ride her again since. The form has worked out well, so we're hopeful of another nice run."

Sir Mark Prescott has a rare two-year-old runner at Royal Ascot in Bath And Tennis, who's is named after a beach club in Florida.

Prescott said: "Her owner Mr Rooney always likes to come over for Royal Ascot and this one was bought to win a Queen Mary, but whether she's good enough remains to be seen. She was unlucky last time when boxed in at Brighton, but that was at Brighton. "

Richard Fahey, trainer of Darkanna and Maybride
Darkanna showed nothing on her first two starts and the worry is she is ground-dependent, as it was soft when she won [at Haydock]. Maybride is a filly we like but we don't know if she'll be tuned in and tough enough after just the one run.

Charlie Johnston, son of and assistant to Mark Johnston, trainer of Emilia James
She hasn't done a lot wrong on her four starts, wining twice and beaten by the draw at Chester in between. She's going to have to improve again from Chelmsford, but that's not impossible.

Brian Meehan, trainer of Go Bananas
She's taking a big step up in class but has shown plenty of speed at home and we hope she can be competitive.

Jeremy Noseda, trainer of Missy Mischief
She'll definitely improve from her debut race and we expect her to like the track and the ground. She deserves to take her chance.

Joseph Tuite, trainer of Mother Of Dragons
We were disappointed she got beat at Goodwood last time, but the owners wanted to run her in the race so hopefully she can step up.

Mick Channon, trainer of Neola
I don't think the ground will be a problem and she's a pretty good filly.

Richard Hannon, trainer of Out Of The Flames
She should have won at Ascot on her first start, but it was great that she could get the job done at Windsor last time. She's improved again and has worked very well since. She has plenty of speed and I can see her running a big race.

FIRST PUBLISHED 6:00PM, JUN 20 2017
She's a talented filly with a wonderful temperament and we're very excited about our chances