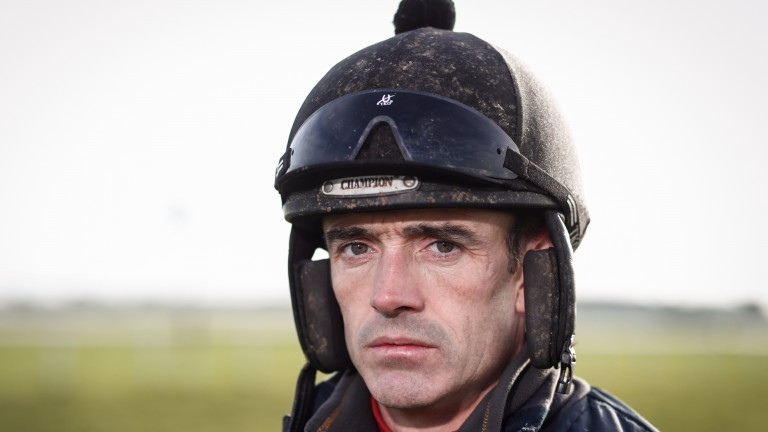 Ruby Walsh: will be back in time for the Cheltenham Festival says Dr Adrian McGoldrick
Patrick McCann
1 of 1
By David Jennings UPDATED 3:20PM, NOV 20 2017

Ruby Walsh is home, does not require surgery and will most definitely be back in time for the Cheltenham Festival, according to Turf Club chief medical officer Dr Adrian McGoldrick.

Walsh's right leg is in a plaster cast after he fractured his tibia in a fall from Let's Dance at the fourth-last in the Listed mares' hurdle at Punchestown on Saturday.

The big question after such a serious injury is whether he will be back in time for Cheltenham in March, but McGoldrick dispelled any notion he might miss the festival.

He said: "Ruby is in a plaster of Paris and, while it is impossible to say exactly how long he will be out for as every fracture is different in the time it takes to heal, there is absolutely no question about him being back in time for Cheltenham. He definitely will. I have no doubt about that."

Walsh was returning to action from an 11-day absence because of a hand injury at Punchestown and suffered three falls from his first four rides, the other being a winner.

The champion jockey of the last four seasons will miss some top rides over the next few weeks, starting with Faugheen in Sunday's Morgiana Hurdle at Punchestown, and will be playing catch up behind Davy Russell in the riders' title when he does return, with Russell, on 69 winners, seven ahead of Walsh.

FIRST PUBLISHED 1:19PM, NOV 19 2017
There is absolutely no question about him being back in time for Cheltenham. He definitely will. I have no doubt about that