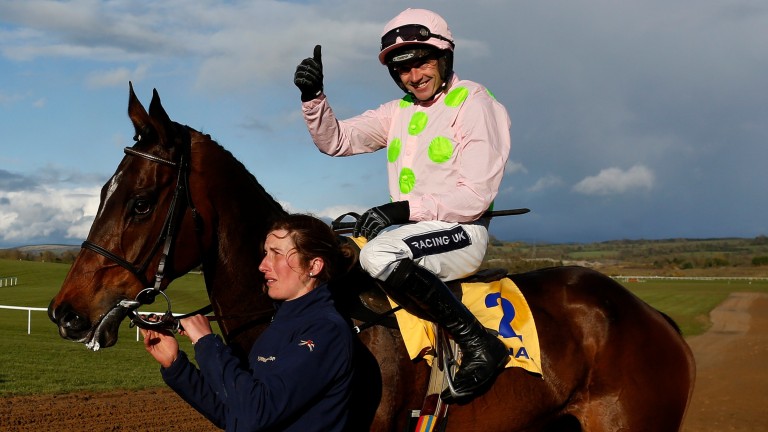 Douvan: set to return in the Hilly Way Chase at Cork on Sunday but will Ruby Walsh be riding him or Djakadam in the John Durkan?
Alan Crowhurst
1 of 1
By Richard Birch 12:35PM, DEC 1 2016

Douvan was on Wednesday eased to a top-priced 6-4 for Saturday's Betfair's Tingle Creek as Ruby Walsh described bookmakers who had offered an extraordinary 4-1 about last season's Racing Post Arkle winner "mad in the head".

The Willie Mullins-trained star was backed into 4-7 on Tuesday before drifting back out to odds against on Wednesday night as money arrived for stablemate Un De Sceaux – now available at 11-4.

The dramatic fluctuations came amid uncertainty over Douvan's participation in Sandown's Grade 1 but Walsh, writing in his Paddy Power blog, said: "Willie Mullins will make a decision on Douvan running at declaration time [on Thursday], but whoever priced him at 4-1 ante-post was mad in the head anyway.

"He’s the odds-on favourite for the Champion Chase, is unbeaten since he joined us at Closutton, and we’ve never made any secret of how highly we rate him.

"If the bookmakers decided for some reason to price Douvan like he wasn’t going to run that’s their problem, not ours.

"I expect him to run a big race if he takes part, but I also expect Un De Sceaux to do the same if he runs.”

Bet365 were one of the firms who offered 4-1, and spokesman Pat Cooney said: "It’s one instance where bookmakers got the price completely wrong.

"We were 4-1, and quickly went 3-1, 9-4 and then odds-on. We were playing guess the runners, and assuming that Un De Sceaux would be coming over."

David Williams, director of media at Ladbrokes, said: "In the short term the Tingle Creek guessing game has possibly left some layers with egg on their faces, but the longer-term ramifications are potentially more significant.

"Ultimately firms may be less inclined to offer early markets on ante-post races and be swifter to suspend when rumours start to swirl."

Jon Ivan-Duke, for William Hill, said on Wednesday: "Douvan is now on the drift and Un De Sceaux is being backed. It looks like there could be some disappointed punters if one of them doesn’t run in the Tingle Creek."

The ground on Sandown's chase course remains good, good to soft in places after a bitterly cold night on Tuesday when temperatures dipped to -5.7C at 4am.

Clerk of the course Andrew Cooper said: "It was very cold overnight, but temperatures went up to 6C on Wednesday.

"We're supposed to be getting similar daytime temperatures over the next couple of days, and hopefully it will be above freezing during the nights.

"The course is covered in places and, assuming the forecast is correct, all should be okay."

FIRST PUBLISHED 6:57PM, NOV 30 2016
If the bookmakers decided for some reason to price Douvan like he wasn't going to run that's their problem, not ours