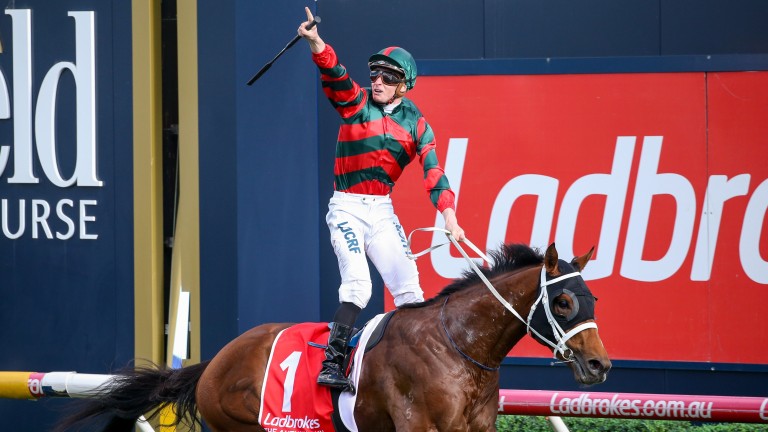 The Autumn Sun: Royal Ascot is under serious consideration for the three-time Group 1 winner
Racing Photos
1 of 1
By Stuart Riley in Melbourne UPDATED 10:28AM, OCT 23 2018

Trainer Chris Waller may not have made it to Royal Ascot with superstar Winx, but he could make the journey next year with impressive Caulfield Guineas winner The Autumn Sun.

The Winx camp freely admit they waited too long to travel the mare. With a journey halfway around the world and back putting in jeopardy her chance of immortality and a fourth Cox Plate, the stakes simply became too high for such an ambitious campaign.

However, the commercial realities of possessing such a valuable colt mean the equation is very different for The Autumn Sun. In all likelihood his racing career will be significantly shorter and therefore connections are considering ways to make it as sweet as possible.

On whether a European campaign was a possibility, Waller said: "Definitely. I'll be suggesting it to the owners."

The countdown is on for the @CoxPlate Carnival. Zoom in to find your favourite Winx moment! pic.twitter.com/DICqzxti8z

There are a few issues to ponder, including which race he would go for and the fact the weight-for-age scale in Britain does not take into account horses bred in the southern hemisphere are in effect eight or nine months younger than their classified age, making a younger horse's assignment tougher.

Then there is also the weight of expectation as The Autumn Sun is fast becoming a superstar in Australia. He has won five of his six starts, including three Group 1s, the latest being this month's four-and-a-half-length romp in the Caulfield Guineas.

It was such an impressive performance, it left many convinced that had he gone for the Cox Plate he would at the very least have given Winx a race in receipt of 7.5kg (1st 3lb) from the great mare. Instead connections are considering a step back to sprinting distances for his European adventure.

Waller said: "We've got to weigh up how a high profile three-year-old colt fits in to racing against Europe's best horses on a slightly uneven weight scale.

"At Ascot he'd still be three, but having to race against older horses off level weights [he would count as a four-year-old in Britain].

"And like Winx he'd be expected to fly the flag for Australian racing and we've not quite worked out a distance yet – it would be either the Diamond Jubilee over six furlongs or Queen Anne over a mile. I think there's a very good chance he'll go, but ultimately the owners have the final say."

Waller added that if it did not happen in 2019 it was unlikely ever to.

He said: "We'd probably have to travel in 2019 as colts get retired so early I doubt he'd still be racing in June 2020 as his value at stud is already huge, so if he's to go it would have to be next year."

FIRST PUBLISHED 11:00AM, OCT 21 2018
I think there's a very good chance, but ultimately the owners will have the final say