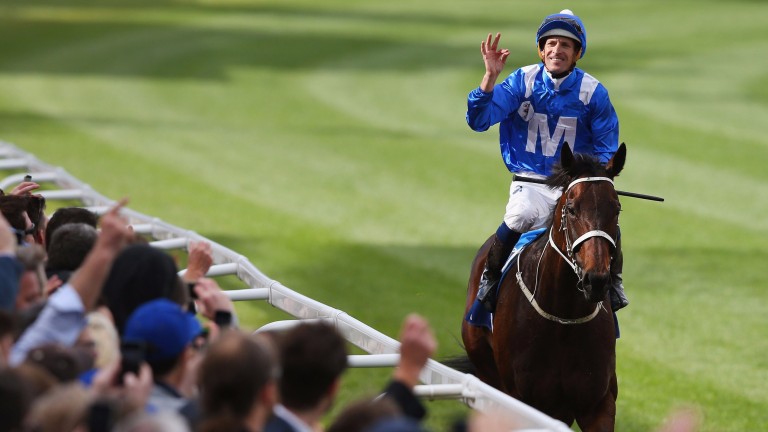 Winx aims for win number 15 in the Chipping Norton Stakes at Randwick on Saturday
Michael Dodge
1 of 1
By Scott Burton 6:00PM, FEB 23 2017

Under the cover of virtual darkness Winx came through her final racecourse workout on Thursday, two days before her date with destiny at Randwick.

A 15th straight success would see her sail past the mark of Depression-era national hero Phar Lap, and trainer Chris Waller was more than happy with what he saw under floodlights and in front of an ever-growing army of racing and general press.

"She's going as well as ever," said Waller, who sends Winx back out 12 days after her weather-delayed reappearance victory in the Apollo Stakes at the same venue.

"It's hard to quantify how well she's going. Obviously we saw her win well first up. You can't really go better than breaking the track record in the Cox Plate, which was almost 18 months ago, and winning another Cox Plate by such a big margin."

Godolphin's Hartnell will attempt to overturn five defeats at the hands of Winx, although trainer John O'Shea effectively conceded defeat in advance when saying: "I never thought we could [beat her], especially not at a mile."

When asked if he took O'Shea at his word, Waller said: "I take no notice whatsoever. With horseracing you never really know where the next superstar is coming from and Hartnell is a very good example of that. The Cox Plate was billed as a match race and he did run second."

When betting opened on the Chipping Norton at the start of the week Winx was chalked up at $1.10, but that hasn't deterred punters from siding with what they see as the ultimate good thing.

TAB reported on Thursday Winx had accounted for 99.73 per cent of bets struck on the race.

Spokesman Gerard Middleton told AAP: "It doesn't matter what price she is, punters just line up to back her, like they did with Black Caviar."

Jameka back in action

Connections of Caulfield Cup winner Jameka will take what they hope will be the next step on the road to an ambitious international campaign this summer when she faces ten rivals in the Group 2 Peter Young Stakes at Caulfield.

Jameka was a close-up fourth on her return to action in the CF Orr Stakes earlier in the month.