Twenty and counting: wondermare Winx out to add to Group 1 tally 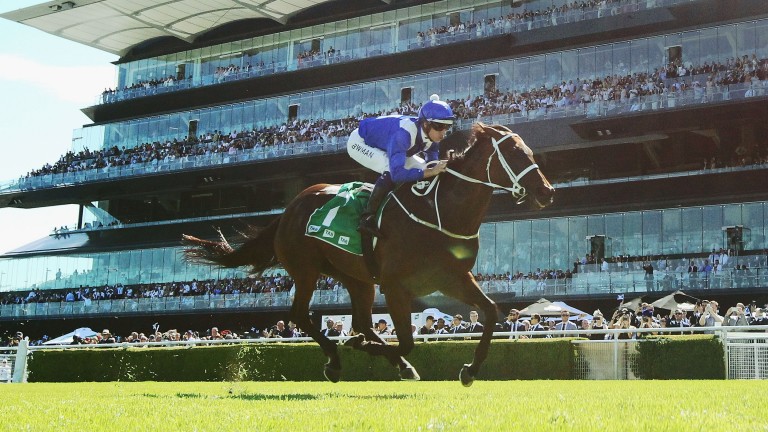 Trainer Chris Waller has said he is pleased with Winx's preparation since her seasonal win ahead of her bid for a 20th Group 1 success and 27 race wins in succession on Saturday morning.

The Colgate Optic White Stakes (6.10am) over a mile, or the George Main Stakes as it is registered, is Winx's second assignment this spring, which racing fans worldwide are hoping culminates in a bid for a fourth Ladbrokes Cox Plate.

Waller said the world's best racehorse has continued to tick over perfectly since her dominant victory in the Group 1 Winx Stakes over seven furlongs four weeks ago.

"It's pretty straightforward [to train her], but it's four weeks to worry about things," Waller added.

"What you're going to do with them, what you need to do, when you need to do it, because you need to make sure you keep them up to their work, as they can train off and not be heading towards their grand finals in the right fitness.

"I'm happy with everything and how it's gone.

Winx (and Unforgotten) galloping at Rosehill ahead of her Saturday assignment #GoWinx #Live https://t.co/RcyIhzrhHF

"Two weeks ago, we took her to Randwick for a jump-out – it gets the adrenaline pumping, gets her on the horse truck, gets her used to the crowd, so that was an important part.

"Since then, her regular maintenance has gone to plan. She had a very good gallop on Monday morning.

"Hugh and I and the whole team were very happy with that."

Winx's trusty associate Hugh Bowman said he was confident he'll get the right tempo to help the champion settle this weekend, and confirm she's still on track for a crack at a historic fourth Cox Plate.

"It's not going to be a muddling speed. It's going to be consistent. That gives me confidence," Bowman said.

"I've drawn barrier three. I always try and get her out of the barriers as smoothly as we can, and from then on let her be comfortable wherever she's happy, and start to work into it as the business end of the race comes.

"Unforgotten's a very good mare. She's already won at Group 1 level, but she's shown that she's up to weight-for-age level winning the Chelmsford. She's not as good as Winx, but she certainly deserves her place at Group 1 weight-for-age."

However the door certainly remains ajar for Unforgotten to tackle both if her form and fitness permit, as Waller explained a misunderstanding had him thinking a trip to Melbourne was further back in his thinking.

"I was a little confused when they put the weights out for the Caulfield Cup as it looked as though she was 60th in line to gain a start. We've since learned she's tenth in line, so that's changed my thinking a little bit in the last 24 hours," he said on Thursday morning.

"That's the beauty of the spring, there's lots of options with these great horses, and we're lucky to have two or three of them in the stables.

"We need to work it out. It's obviously not ideal going from a mile to 2400m, but some good horses have done it in the past. And she has fortunately won over 2400m, so we'll get towards Saturday and work it out from there."

Waller said he wasn't concerned that Unforgotten could challenge the world's best horse in Saturday's Group 1, and with a young horse like her, preservation was certainly at the forefront of his mind.

"She needs to run [on Saturday] – we've just got to try and work out where she's heading," he said.

"Whether it's an Epsom here in Sydney, or if she heads to Melbourne for a Caulfield Cup.

"The weights in the Epsom suggest she has a winning chance.

"What we did with Winx as a four-year-old, where Unforgotten is now, is the most important part of her career, we did protect her, she only had three runs in the spring – one of them being the Cox Plate.

"It seemed to set a platform for her to come back as a better horse later as a four-year-old.

"So it's not just about winning their next start with a horse like Unforgotten, because I doubt she could beat a horse like Winx, in fact she can't beat Winx unless Winx has an off-day and she hasn't had one in 26 starts.

"She's a very talented horse Unforgotten, and hopefully she can continue through the spring in some big races in her own right."

FIRST PUBLISHED 3:27PM, SEP 13 2018
Since then, her regular maintenance has gone to plan. She had a very good gallop on Monday morning