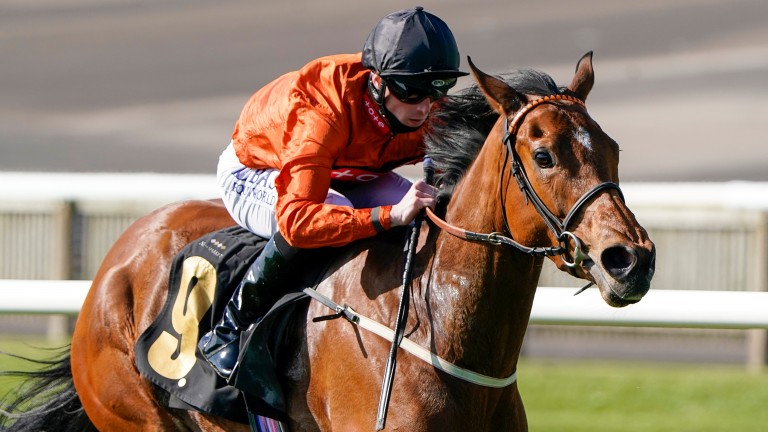 Double Or Bubble: chasing a four-timer
Alan Crowhurst
1 of 1
By Tom Collins and David Milnes UPDATED 6:38PM, MAY 7 2021

Seven of the last nine winners of Chartwell Fillies' Stakes failed to win another race during their careers, such is the desire and value to own a Group 3 filly who has the potential to become a successful broodmare.

This race will have long been considered a realistic and highly anticipated seasonal target for those just below the top level. Despite having that in mind, this year's field looks pretty classy with six runners boasting an official rating of 100 or higher.

Bounce The Blues and three-year-old Isabella Giles top the charts on that score thanks to identical marks of 107. The first-named filly has run three times trainer Andrew Balding since she moved from John Feane, for whom she won at Listed level last season. 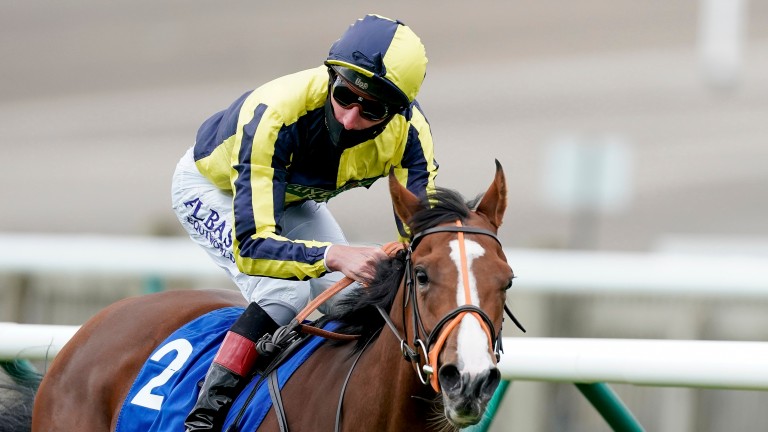 Runner-up in the Rosemary Stakes last September and an eyecatching fifth against the boys on her return, Bounce The Blues should relish the drop to 7f and appears to have been primed for success on the Lingfield turf.

Isabella Giles is evidently a longer term prospect with trainer Clive Cox bypassing the 1,000 Guineas in favour of a drop back in trip. Further rain would enhance her chances of a third Group success following victories in the Prestige and Rockfel last year.

Her willingness to grind out wins is a characteristic many lack, but she will have to settle much better than when a fading sixth on her return in the Fred Darling if she is to play a part on her first outing against her elders.

They include the four-timer-seeking Double Or Bubble, who is a sister to the 2017 winner of this race Mix And Mingle. Both are owned by breeder Salah Fustok and success here for the Chris Wall-trained filly may book her place in the breeding sheds this winter.

Finally, the Andreas Wohler-trained Axana brings some international flavour and can't be discounted with two strikes at this level to her name. It has to be noted that fellow German Peter Schiergen caused a 16-1 shock in 2014 with Emerald Star.
Race analysis by Tom Collins

Double Or Bubble looking to emulate her sister

Double Or Bubble bids to keep a family tradition going by winning the feature for older females just as her sister Mix And Mingle did in 2017.

Providing the worst of the rains stay away from the Surrey circuit, trainer Chris Wall is hoping his four-year-old can back up her impressive return in a 7f handicap at Newmarket’s Craven meeting last month.

Jockey Jack Mitchell achieved a notable first at Lingfield in April when riding his first winner on All-Weather Finals day and is back on board the daughter of Exceed And Excel, who is on a four-timer after wins at Sandown and Ascot at the end of 2020.

Wall said: “Unfortunately we’re not going to get Double Or Bubble’s ideal ground and if it came up very soft we may have to consider if we run her or not. On the plus side, she’s very well and came out of her Newmarket run in great shape and worked well last week. If conditions allow, I’m sure she’ll be competitive."

Oisin Murphy, rider of Bounce The Blues
She has form on soft ground so won’t mind a drop of rain. I’ve ridden her at home lately and she went nicely. This looks a good spot for her and Andrew's [Balding] horses are flying.

Emily Scott, racing manager to Amo Racing, owners of Meu Amor
I saw her at evening stables last night and she hasn’t yet come in her coat, but we feel this is a nice starting point.
Reporting by David Milnes

2.30 Ascot: 'He's in great shape' – Crisford bullish about Without A Fight for Buckhounds

2.50 Lingfield: is there a genuine Epsom contender ready to pounce in the Derby Trial?

3.10 Haydock: is Aintree faller Copperless going to bounce back in the Swinton Hurdle?

FIRST PUBLISHED 6:00PM, MAY 7 2021
This looks a good spot for her and Andrew's horses are flying

What we learned from day four of Royal Ascot 'There is no denying the phenomenal training that has gone into Rohaan' Ascot due a fitting finale with racing's greatest fan set to star on day five 'I expect her to outrun her odds' - key quotes and analysis for the Commonwealth Can any rivals throw down a challenge to 'enormously exciting' Lady Bowthorpe? 'Special' Berkshire Shadow lands long-running gamble for ecstatic connections