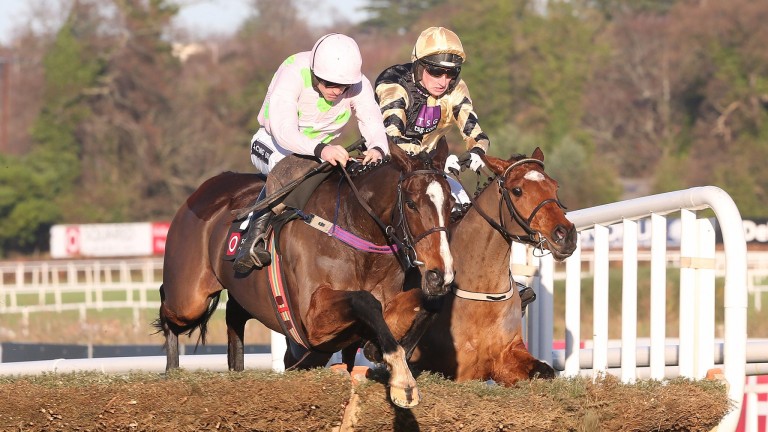 Vroum Vroum Mag brings a touch of class to proceedings in South Yorkshire where last year's Cheltenham Festival winner bids to follow in the hoofprints of her stablemate Annie Power who landed this in 2014.

The eight-year-old takes a significant drop in trip and level of competition after her latest success in the Grade 1 Christmas Hurdle over three miles at Leopardstown in December.

Prior to that, Vroum Vroum Mag had suffered a narrow defeat at the hands of Apple Jade in the Hatton's Grace Hurdle at Fairyhouse and is rated 16lb clear of her nearest rival Midnight Jazz.

As Ruby Walsh is riding Un De Sceaux at Cheltenham, Paul Townend is reunited with Willie Mullins' mare for the first time since December 2014 when the pair won a novice chase at Cork.

Vroum Vroum Mag is a best-priced 7-4 favourite to repeat her success of a year ago in the Mares' Hurdle at the festival, where she also has the option of the Champion Hurdle as well as the Stayers'.

A win for Midnight Jazz would give trainer Ben Case his biggest domestic success, and the seven-year-old already has some black type after near-misses at Listed level at Wetherby and Sandown.

Only one mare older than seven has been successful in the seven previous runnings of this race, which was Alasi in 2012.

The Karl Burke-trained Intense Tango makes her third straight appearance in the race. Having won it in 2015, she finished only sixth a year ago.

Paul Nicholls, trainer of Coillte Lass
She's done very well and has kept improving, but obviously Vroum Vroum Mag is going to be very hard to beat. There's good prize-money, so we'll see how she gets on.

Karl Burke, trainer of Intense Tango
She had a run on the all-weather the other day, which she needed badly and was one of her qualifying runs for Good Friday if we decide to head there. We're looking forward to seeing her back over hurdles for the first time since she had a wind operation last year and we know she likes the track. It will be a tough ask with Vroum Vroum Mag in there, but we'll give it a go.

Dan Skelton, trainer of Late Night Lily
It's a hot heat and we're really on a black-type mission after her win in a lesser grade last time. She deserves to have a crack at something like this and she should like the trip and the track. If she can finish in the first three we'll be delighted.

Ben Case, trainer of Midnight Jazz
We know she acts around the track as she won well there earlier in the season. She's a tough, honest mare who won't be disgraced despite the presence of Vroum Vroum Mag. If we can grab some of the nice prize-money we'll be delighted.

FIRST PUBLISHED 6:00PM, JAN 27 2017
She's a tough, honest mare who won't be disgraced despite the presence of Vroum Vroum Mag