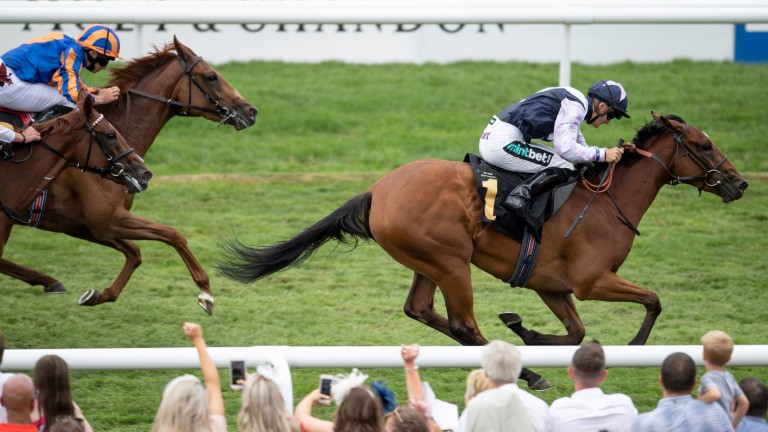 This is a fillies' Listed race that revolves totally around Antonia De Vega.

On official ratings she is 10lb superior to Bighearted, who holds the second highest mark in a field of 12 who all meet on level weights.

Ralph Beckett has made a bright start to the delayed season and Antonia De Vega, who goes well fresh, could develop into one of his biggest stars in 2020.

Winner of three of her first four starts, she was particularly impressive when slamming Star Terms by four lengths in a similar event over 1m2f at Newbury 12 months ago.

The manner in which she forged clear in the final 100 yards strongly pointed to the likelihood of her being even more effective at 1m4f, and she went on to produce a career-best upped in distance for the Group 1 Grosser Preis von Bayern in Munich last November.

Antonia De Vega was again doing her best work at the finish when fourth to Nancho – beaten less than a length – and so the stiff uphill Pontefract finish will be in her favour.

Stablemate Manuela De Vega, who finished second in that Munich race, made a winning seasonal reappearance in Haydock's Group 3 Pinnacle Stakes this month.

Course winner Bighearted made excellent progress in 2019, improving her rating by 18lb. She has yet to win outside of handicap company, but was placed in fillies' Listed events at Yarmouth and Compiegne towards the back-end of last season.

She may well improve again this term, but will still need Antonia De Vega to significantly underperform if she is to topple the likely odds-on favourite.

Trainer Ralph Beckett has a remarkable 42 per cent success rate at Pontefract, having struck ten times from just 24 runners in the last five seasons.

Michael Bell, trainer of Bighearted
She's a progressive filly and in good form but realistically Antonia De Vega looks to hold all the aces on known form. She ought to stay. When she ran over a mile and a quarter in France on testing ground she galloped all the way to the line. Her half-sister Bite The Cherry stayed well so she has every chance of getting the trip, while Bighearted has won at the track before.

Simon Crisford, co-trainer of Maybe Today
She's fresh and she's well. The idea of keeping her in training was to try to pick up a little bit of black type. These Listed fillies' races are going to be tricky but she's well and hopefully she can run a nice race. We've been happy with her preparation leading up to this.

Henry Candy, trainer of La Lune
This is a fairly unusual mile and a half races for older fillies. I’m hoping she might squeak some black type, although that might be very optimistic. Having said that, I like the filly a lot. She’s only tiny but has a wonderful attitude and a huge, big stride on her. She’s been working well.
Reporting by Scott Burton

FIRST PUBLISHED 6:00PM, JUN 14 2020
She ought to stay. When she ran over a mile and a quater in France on testing ground she galloped all the way to the line