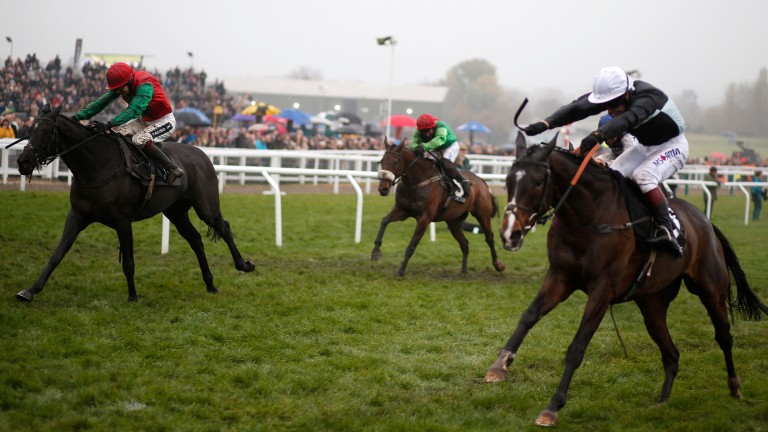 Village Vic (right) does not have to face Taquin Du Seuil (left) again in Saturday's Caspian Caviar Gold Cup at Cheltenham
Alan Crowhurst
1 of 1
By Bruce Jackson 9:33AM, DEC 10 2016

While there had been doubts expressed about ante-post favourite Aloomomo and Village Vic, the Jonjo O'Neill-trained top weight Taquin Du Seuil was expected to bid for the Cheltenham double.

Instead it is Village Vic, whom he ran down on the run-in last month, who heads the weights on 11st 12lb and Aloomomo has been declared but with the proviso he will not run unless there is significant rain.

That seems unlikely, leaving punters facing an agonising reduction to 15 to go to post for Saturday's big betting handicap chase.

Cheltenham had another dry night into Thursday morning and a forecast of drizzle amounting to no more than 1-2mm.

Simon Claisse, clerk of the course, said: "There is a little drizzle around this morning but nothing of any significance and I wouldn't foresee the current going description changing. The rain forecast for Saturday now looks like arriving after racing but it is a changeable picture.

"We are continuing to water the centre of the cross-country course to eliminate the firm in places there."

The ground is good on both the hurdle and chase tracks as racing switches to the New course for this meeting.

Buywise, who has been declared with a first-time visor, and Aso, third and fourth in the BetVictor Gold Cup, are back for more and Paul Nicholls has new favourite Bouvreuil and Frodon in the final field.