Viewers haven't the foggiest as runners disappear in gloom 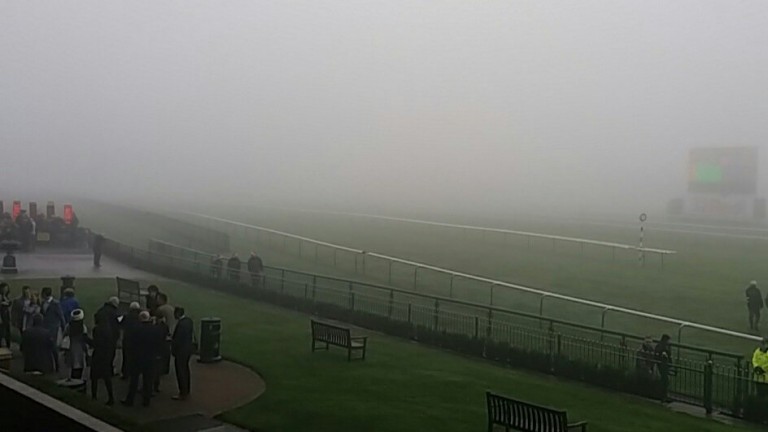 There should be more concrete rules in place to prevent another farcical event like the one we saw - or didn't see - at Haydock
Keith Melrose
1 of 1
By Keith Melrose 11:55AM, DEC 19 2016

It sounds as though the last race at Haydock on Saturday was a thriller, with the soon-labouring Clyne rallying under Adam Wedge to secure a narrow success over Le Rocher.

That all has to be taken with a fair degree of guesswork, however, as the race was run in next to total opacity due to thickening fog.

The runners could not be seen virtually until they crossed the line, and from the stands all that was clear was that one silhouette had crossed the line around half a length in front of another. Even racecourse commentator Stewart Machin conceded defeat.

There were no distances published, only a finishing order, and no official time taken. There was no stewards' inquiry. It was later revealed that a stipendiary steward positioned on the winning post had been employed to assist the judge in compiling the result.

"We saw it worsening after the Tommy Whittle and sent a stipendiary steward down to the winning post as a contingency," said clerk of the course Kirkland Tellwright.

"It was the last race and there's always a desire to complete the card if you can, but we have to admit that had it worsened or been as bad as that at the time of the first race we could not have done so," he added.

The delay in announcing the result triggered a bizarre sequence of events, in which the public's first indication as to what had won was the jockeys sorting themselves as they entered the winners' enclosure. Shortly afterwards, the result was announced on the racecourse PA system.

Wedge admitted that visibility had been poor. "It was only when I saw the wings that I knew a hurdle was coming up," he said. "[Visibility] couldn't have been much more than 50 yards."

Remarkably, there were no fallers or unseats, with the only horse not to complete being Lettheriverrundry who was pulled up down the back straight.

Visibility earlier in the day had been poor, down to just over a hundred yards before the first, but had receded for much of the day's racing.

The whole of the straight was visible midway through the card, but the fog descended again before the feature Tommy Whittle Chase at 2.40 and worsened until the last race 35 minutes later.

It is not the first time that this meeting has been the focus of controversy over the suitability to race. In 2009, the same fixture was abandoned less than 30 minutes before the scheduled off time of the first race due to frozen fences, which had not been covered.

Jockeys were, however, happy to race.

"The fog then started to come in shortly after the runners had set off in the last race and visibility was difficult. The judge made it clear he was going to have difficulty calling the result, but there was a stipendiary steward in the medical vehicle following the runners. He positioned himself on the line and was in a position to call the result. The team on course then took their time to clear the result and to make sure there was full confidence in the integrity of the result."

Mounsey added: "We acknowledge that there is betting on winning distances and not being able to return this is not ideal, but at the same time if a race can be run fairly we will try to run it. The implications of cancelling a race has obvious consequences for trainers, owners, jockeys and stable staff and everyone who has had a bet on the race.

"Ultimately a refereeing decision was made in real time. We will, of course, take on board the feedback from the day and consider what action to take the next time such a situation arises."

FIRST PUBLISHED 5:06PM, DEC 17 2016
It was the last race and there's always a desire to complete the card if you can