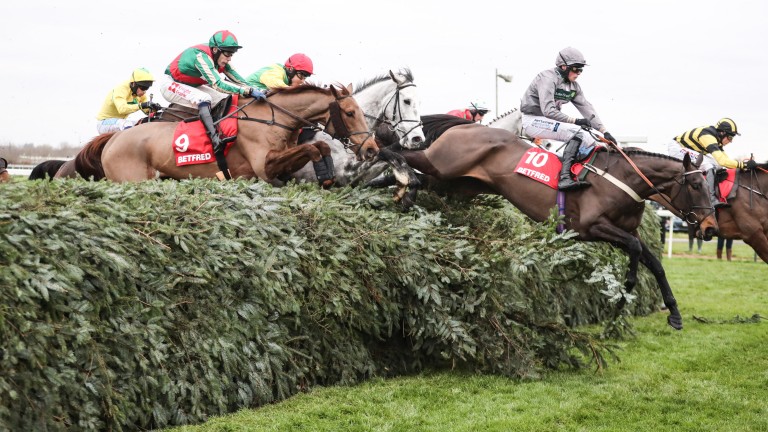 There's no place like Aintree for emotion but the agony and ecstasy were laid on thick in a heart-breaking finish to the Betfred Becher Chase.

It was agony for Henry Brooke on Highland Lodge, just seven weeks after a horrific fall at Hexham that left him in an induced coma. The thought of returning to ride last year's winner had powered his astonishing recovery from multiple injuries and after returning to action on Wednesday, the fairytale nearly came true.

As 12 months earlier, he conjured a magnificent round of jumping out of the chaser who is the pride of Jimmy Moffatt's small Cartmel stable and had him up with the pace from the off.

He went on five out and looked all set to become the first repeat winner of the 3m3f test as he went clear after the last, only to be overhauled in the dying strides by Tom Scudamore on 8-1 favourite Vieux Lion Rouge.

Brooke could not hide his disappointment and said: "Maybe I should have waited a little bit and taken my time a bit more. I was on the rail but he drifted over. Obviously I am disappointed he hasn't won, which I came back to do. I don't like finishing second but hopefully he will get into the National now."

Emotions also ran high for owner Simon Wilson, who led Highland Lodge in - 12 months to the day that the task had been done in triumph by his teenage son Patrick, who has since died of brain cancer.

But he had no word of criticism for Brooke and was thrilled with the horse, saying: "I thought he ran a brilliant race. He jumps for fun and you could see them all struggling behind him. It's a long way in on your own and he's got done but how can you be disappointed with that?

"Just tell Mr Smith to put him up a couple of pounds to make sure he gets in the National. That is the ultimate target as he just loves jumping these fences."

The ecstasy was with Caroline Tisdall's Vieux Lion Rouge, who is set for another crack at the world's most famous chase after finishing seventh last season.

"I wasn't sure he was quite going to get there but once Scu (rider, Tom Scudamore) got the running rail at the Elbow the horse has responded well," said trainer David Pipe, who now has to plan a route back to the National - which may not involve another race.

Saw it out fantastically

Scudamore is looking forward to another attempt to emulate his late grandfather Michael, who won the National on Oxo in 1959.

"He hasn't been the strongest of finishers in the past but he is a stronger horse now and he has seen that out fantastically," the jockey said.

"I've won a Sefton before and to win another race over these fences is a tremendous thrill. You get quite emotional round here because of grandad and the amount of time I've watched the National with him - he was helping me all the way round."

Last year's National runner-up The Last Samuri was a gallant third under top weight but Brian Harding was stood down for the rest of the day after a first-fence fall on Saint Are.

FIRST PUBLISHED 2:03PM, DEC 3 2016
He hasn't been the strongest of finishers in the past but he is a stronger horse now and he has seen that out fantastically