Vic in top form ahead of bid to repeat 2015 victory 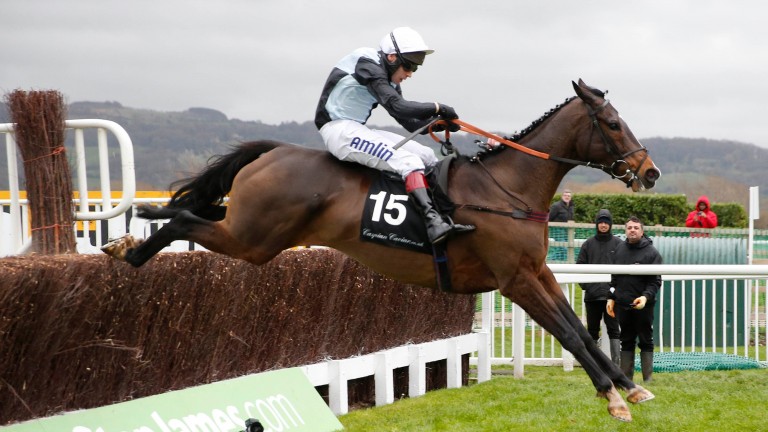 Traditionally the highlight of Cheltenham’s two-day December meeting which is usually won by a young, progressive chaser from a top stable.

The Philip Hobbs-trained nine-year-old is one of a number vying for outright favouritism including Paul Nicholls’s five-year-old Bouvreuil, who fits the bill of a classic winner from a trends perspective.

Nicholls is also represented by the Sam Twiston-Davies-ridden four-year-old novice Frodon, a slick traveller who was brought to a shuddering halt by a blunder at the fourth-last in the BetVictor when moving powerfully.

Buywise, who has a huge fan club despite his tendency to miss out on the big occasion, is equipped with a visor for the first time as trainer Evan Williams bids to eke out that crucial bit more from his nine-year-old.

Colin Tizzard has been carrying all before him at the major Saturday fixtures this season. His hopes of adding the Caspian Caviar Gold Cup to his long list of big wins rest with Sizing Codelco, beaten favourite for a 2m handicap chase at Cheltenham last month, and the progressive Quite By Chance.

Philip Hobbs, trainer of Village Vic
It's a big ask off top weight, but he ran a fantastic race last time. It was his first run of the season so I hope there's a bit of improvement from that.

Evan Williams, trainer of Buywise and King's Odyssey
We're trying Buywise in a first-time visor. Let's hope that helps him. I feel that King's Odyssey has benefitted massively from his first run of the season at Haydock.

Colin Tizzard, trainer of Quite By Chance and Sizing Codelco
Quite By Chance has surprised us this year. We've run him over two miles twice and he seems to have improved 12lb. He goes into the race in the form of his life, and we'll see if he can find a bit more progress for the step up in trip. Sizing Codelco started favourite for a 2m handicap chase at Cheltenham last month, but couldn't keep up with them. We're trying cheekpieces in the hope that he will travel a bit better over this longer distance.

Paul Nicholls, trainer of Bouvreuil and Frodon
Bouvreuil ran very well last time. It was his first run of the season and first outside of novice chases. He likes Cheltenham, as we saw when he ran well in the Fred Winter and was second again in March and, and if he's progressed from that last run, he'll have a good chance as better ground will suit him. Frodon was travelling really well in the same race when he made a novicey mistake and landed on the ditch. It winded him and Harry [Cobden] nursed him home, but he's had a month off now and is in really good form. He definitely has a chance.

Chris Kellett, trainer of Solar Impulse
He was slightly disappointing last time, but that was over 2m and I feel he'll be better at this trip. He won the Grand Annual at Cheltenham, and the jockey is confident he'll get the distance. The ground should be more to his liking this time as well. He enjoys good ground.

David Dennis, trainer of Roman Flight
He comes into the race on the back of three excellent runs, but 144 is as high as he's ever been. If the ground stays good we'd be hopeful he has an each-way shout. He'd have to produce his A game and some more, but goes there in great shape.

Harry Fry, trainer of Thomas Brown
He did it nicely at Aintree on his reappearance and I hope he can build on it. A 5lb rise is quite lenient compared to what some of ours get. A bit of rain, which is forecast, won't do any harm at all.

Warren Greatrex, trainer of Aloomomo
He's in great nick and I couldn't be happier with him. We're praying for rain – which is or isn't forecast, depending on which report you look at. Hopefully it will come. He'd have a good chance if it did.

Nicky Henderson, trainer of Full Shift
It's the right trip and the right ground, and we've put cheekpieces on for the first time. He ran well at Newbury and one day he'll win one of these.

FIRST PUBLISHED 6:00PM, DEC 9 2016
It's a big ask off top weight, but he ran a fantastic race last time. It was his first run of the season so I hope there's a bit of improvement from that