Vezelay to go on trial for festival after excellent Haydock run 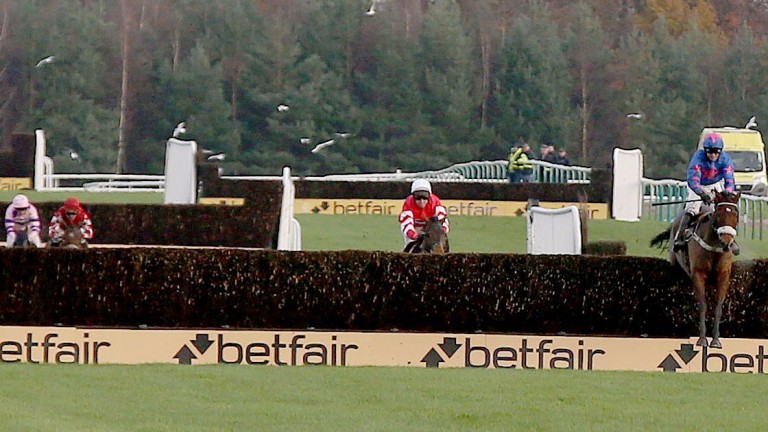 Betfair Chase third Vezelay is in line for a return to Britain, with the Cotswold Chase at the end of January the next target for Emmanuel Clayeux-trained seven-year-old.

Vezelay outran his odds of 50-1 for most of the way at Haydock and, though he eventually finished 28 lengths adrift of Cue Card, he delighted Clayeux with the slickness of his jumping and the way he travelled through the race.

"I was very happy with his performance," said Clayeux on Sunday. "He made one slight mistake but that didn’t make a difference to the result and he adapted very well to the rhythm of English racing. I was really satisfied because I would have ideally preferred to have run in a slightly easier race, but it was difficult to find the opportunity around that date."

Clayeux has pinpointed Trials day at Cheltenham on January 28 with a view to preparing Vezelay - a Grade 2 winner at Auteuil - for a return to Prestbury Park in March.

"He will carry a bit less weight than some of his rivals, which should make things a bit easier," said Clayeux. "If he runs well then the plan is to go for the Ryanair Chase. The drop back in trip wouldn’t be a problem for him, although if he were to run really well in the trial we might still consider the Gold Cup."

Francois Nicolle revealed that Alex De Larredya, an impressive winner of the Grade 1 Grand Prix d’Automne at Auteuil earlier this month, is on course to tackle the JLT Long Walk Hurdle at Ascot on December 17.

Alex De Larredya had Ptit Zig and Aubusson behind him when striding to a seven-length success under Gaetan Masure but could have a new partner for the Long Walk in Simon Munir’s retained jockey Daryl Jacob.

Nicolle said: "The horse remains in very good form and so has been entered for Ascot. There's a pretty good chance Daryl Jacob will ride and he may come over to have a sit on the horse before then.

"It wouldn’t be a problem if that can’t happen as he has already schooled well over English-style hurdles."

FIRST PUBLISHED 3:17PM, NOV 27 2016
If he runs well then the plan is to go for the Ryanair Chase. The drop back in trip wouldn't be a problem for him but if he were to run really well in the trial we might still consider the Gold Cup