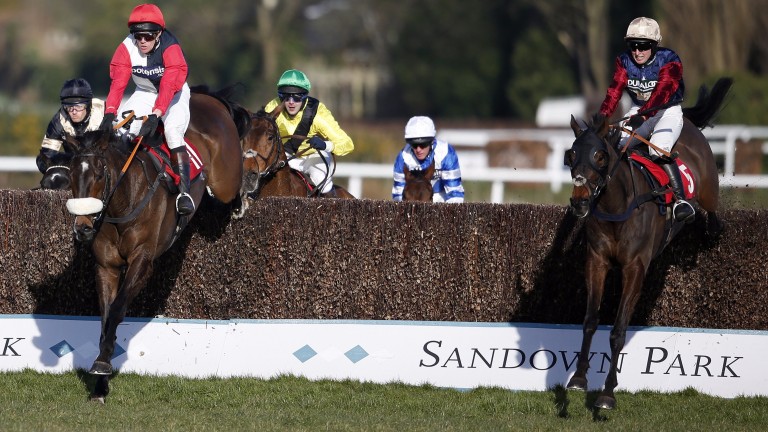 Loose Chips meets his old rival Court By Surprise over an extra half mile here after the pair dominated the finish of last month's veterans' chase.

On that occasion Loose Chips prevailed by half a length, but only after Court by Surprise had nosed ahead on the run-in before thinking better of it.

Both horses clearly love the track, for Loose Chips has two wins and two seconds from five Sandown starts, while Court By Surprise has finished second on all three appearances here, including in the corresponding race in 2013.

However, while the longer trip looks guaranteed to suit Court By Surprise that third second place was symptomatic of an underlying issue for the 11-year-old, who does not enjoy it in front and so has become very hard to win with.

Warming up for Chepstow

Mountainous was a creditable sixth in this race a year ago before winning his second Welsh National, but he was off an 8lb lower mark and racing on more suitable ground.

Paul Nicholls, trainer of Rocky Creek
I think this race might suit him, but he'd probably want the ground a bit slower. He's getting close to a mark where he wants to be and ran okay last time, but he's not as good as he once was.

Kerry Lee, trainer of Mountainous
Mountainous is in great form and ran here last year on the way to Chepstow. He has never won on ground better than soft, but there's a first time for everything.

Kim Bailey, trainer of Jimmy The Jetplane
He had a bloody good summer, despite only winning once, and although he might be badly handicapped now he loves good ground and he loves going right handed so I'm expecting a really bold showing.

Charlie Longsdon, trainer of Loose Chips and Bob Tucker
Loose Chips loves it around Sandown and is running against a lot of his regular foes. Three and a half miles is the only question mark, but he'll run his race and can hopefully go nicely. Bob Tucker has to get the trip too, but he will hopefully creep into it slowly. He's coming down to a more realistic mark.

Emma Lavelle, trainer of Court By Surprise
He seems in good form, the ground will suit, and he loves Sandown. I was gutted last time when he winged the last and then said 'after you', so we'll aim to play him as late as possible.

Nigel Twiston-Davies, trainer of Belmount
He's in good form at home and this trip should suit him. He goes there with every chance.

Neil Mulholland, trainer of Doing Fine
He's only run once for us when he finished a good second and he's in good form at home. Hopefully with a clear round of jumping he can run a nice race.

Philip Hobbs, trainer of Woodford County
He was going to run at Exeter and ideally wants a stiffer test of stamina than he is likely to get on the Sandown ground.

FIRST PUBLISHED 6:00PM, DEC 2 2016
He loves it around Sandown and is running against a lot of his regular foes. Three and a half miles is the only question mark