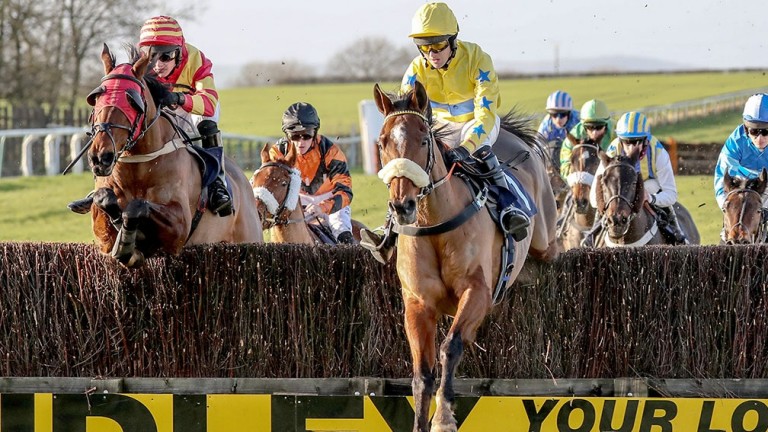 Working Title: on the mark on Boxing Day for the Drinkwater family
John Grossick (racingpost.com/photos)
1 of 1
By David Ashforth 3:48PM, JAN 4 2017

There are other races at Hereford on Wednesday, obviously, but rather as the Gold Cup is the focus of the final day of the Cheltenham Festival, the Weatherbys Hamilton Handicap Chase (2.25) is the highlight of the final day, which is also the first day, of Hereford's meeting.

Will Working Title, a winner at Sedgefield on Boxing Day when aged 14, win again aged 15? Working Title carries a 7lb penalty for his victory in what it would be wrong to describe as a strongly contested event but the opposition at Hereford is not formidable. We can hope and possibly pray (anything's worth trying).

Working Title is a splendid creature. I've never met him myself and have no idea whether he kicks and bites or licks your face but he's got a racing record that few can match.

Highflyer Bloodstock paid 56,000 guineas for him as an unraced five-year-old and he went to Nicky Henderson's yard. Working Title won six times for Henderson and reached a rating of 142, so he was pretty good.

Sold for £22,000 to Caroline Fryer in 2011, Working Title went point-to-pointing but won only once more before Paul Drinkwater bought the horse as a 12-year-old for just £1,400 in 2013. It turned out to be a bargain because Working Title has since won nine more point-to-points, ridden every time by Joe Drinkwater.

Working Title is, clearly, not nearly as good as he was but not many horses have won a bumper, four hurdle races, 10 point-to-points and two chases. He must have a special place in the Drinkwaters' hearts, unless they're heartless. So GO ON WORKING TITLE!

Stoneman, 23, rode his first winner on Arcs Abound in a point-to-point at Ottery St Mary last March. At Hereford he rides Storm Alert for Sue Gardner in the Amateur Riders' Handicap Hurdle (12.55).

Really, you should know all that already but if I don't tell you I don't suppose you'll bother to find out for yourself. Admittedly, the information is of limited value at the moment because, without wanting to be harsh, Storm Alert's not going to win today. On the other hand, a lot of people said the same about Foinavon.

I think you'll find that Staunton, ridden by the promising Mr Sean Houlihan, will reward support. I don't suppose you've bothered to work that out for yourself either.