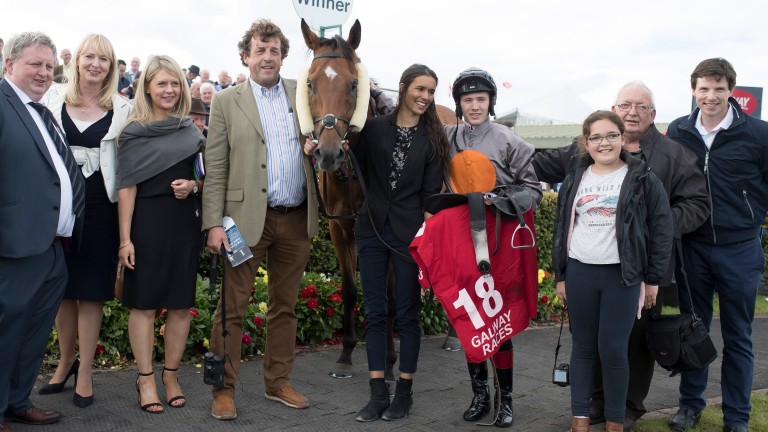 Bubbly Bellini: biding to follow up his Galway Festival success at Roscommon on Monday evening
Patrick McCann
1 of 1
By Bruce Jackson 4:15PM, AUG 28 2017

The Irish Flat jockeys' title race between Colin Keane and Pat Smullen is set to enliven the end of the season with just seven winners between them, and the pair travel to Roscommon this evening with chances on an eight-race card that gets underway at 4.25

This former Alan Bailey-trained gelding is a bit of a legend at the age of ten after Colin Keane worked his magic on the veteran for an 18th win in a 132-race career at Galway at the start of the month.

The handicapper has upped him 5lb to a mark of 72 for that win but he had plummeted so far that he remains handily weighted having scored off a mark of 88 when previously successful 18 months earlier.

Adrian McGuinness has given Bubbly Bellini more than three weeks to recover and bookmakers are taking no chances with the topweight in this big-field handicap despite his poor draw.

You can’t keep a good man down. Dermot Weld’s nightmarish season has been left behind with his 11 winners this month –eight coming in the last fortnight –and five have been ridden by Pat Smullen, who is closing in on Keane at the top of the table.

Ace Of Diamonds carries the famous colours of Weld’s loyal owner Dr Ronan Lambe and this topweight has run only twice this season since being gelded, winning first time up back in April, but he didn't run again until earlier this month.

It is back to Colin Keane on another of his Galway winners as trainer Tony Martin keeps him on his ten-year-old in this middle-distance handicap.

Bookmakers are taking no chances again even though the veteran is dropping back in trip having needed all of the longer distance at Galway to get on top.

Keane had his first ride on this dual-purpose performer at Galway last time. The ten-year-old has been more used to having Ruby Walsh and Barry Geraghty jumping aboard for hurdle races.