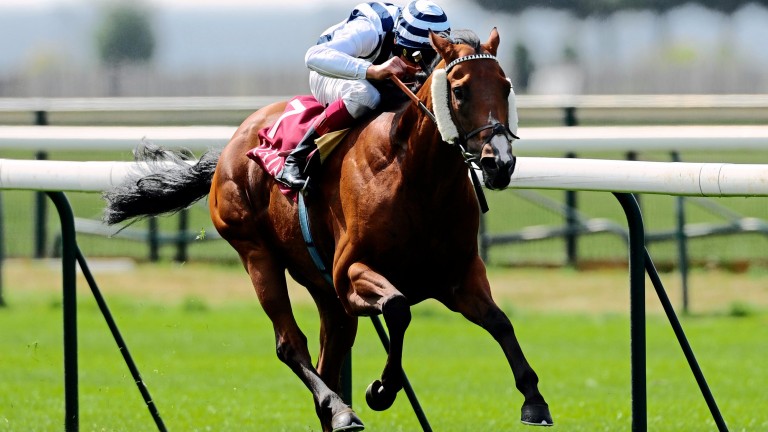 The prize-money is the same for all races but the clear best contest on the Dubai Duty Free Shergar Cup card is the first.

The only 86-105 handicap of the day features six horses rated 100 and above and some more used to compete at Group level.

They include the veteran Mirza, who has shown no sign at ten that age is catching up with him having chased home none other than Battaash, to whom he was giving weight, in the Coral Charge at Sandown last month.

Britain and Ireland appear to have the edge in the contest with Jamie Spencer, Neil Callan and Fran Berry all drawing horses that are prominent in the betting.

Berry has the advantage of having ridden Mirza before. The pair landed a Listed race at Cork five years ago.

Three years ago Tropics went down by a nose in the Group 1 July Cup. He has had a lot of time off since and is only three races into his comeback.

As a result his rating of 100 is now 11lb lower in the handicap than he started the campaign, a mark he was winning off when he was climbing the sprinting ladder.

Robert Cowell has won this race three times in the last ten years and takes aim with two in Sir Robert Cheval and Green Door.

Secretinthepark was his last winner of the race two years ago, ridden by Kerrin McEvoy. If fit McEvoy's sister-in-law Michelle Payne will partner Sir Robert Cheval.

Get used to it

Each team has an anthem so a win for Britain and Ireland will be accompanied by The Boys Are Back In Town; the Rest of the Word, Rockin All Over The World; Girls: Sisters Are Doin It For Themselves; Europe, Ca Plane Pour Moi.

Rae Guest, trainer of Mirza
We were very pleased to get Fran because he won a Listed race in Ireland on him. Nowadays he likes faster ground so hopefully it will dry out. He's in great form, couldn't be better. This will be one of his few runs in a handicap. He's got top weight but he's earned it.

Ruth Carr, trainer of Pipers Note
He ran well at Ascot last time. I'm hoping the rain stays away and it dries up a bit. He's in good form and it's great prize-money for a ten-runner race. Hopefully he can grab a piece of it.

Dean Ivory, trainer of Tropics and Stake Acclaim
Tropics's last race was more promising. He's well and I think he should run a big race. Stake Acclaim ran in the Stewards' Cup and I might be running him a bit quick, but five furlongs and soft ground should suit.

Kevin Ryan, trainer of Lexington Abbey
Everything is going well at home and he's in good form. He's had three good efforts at five furlongs and should run his race once again.