Versatile Vroum Vroum back to winning ways over three miles 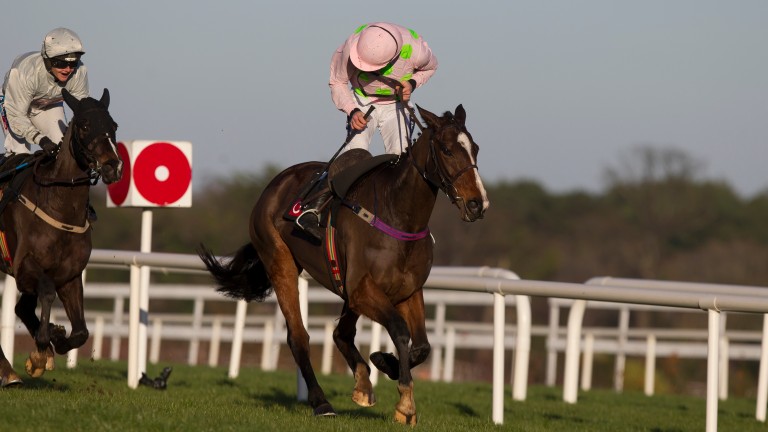 So Vroum Vroum Mag did win the Christmas Hurdle. Not the Kempton one many expected her to win but the Leopardstown one over a mile further. It seems her versatility knows no bounds.

Two miles or three or anything in between, hurdles or fences, slow or quick ground, Britain or Ireland. It does not seem to matter a jot to the seven-year-old, who regained winning ways with a workmanlike victory over stablemate Clondaw Warrior. It probably would have been a Willie Mullins 1-2-3 had the front-running Shaneshill not crashed out at the last when upsides the winner.

So where will she go now? Paddy Power were quick off the mark and priced up what race she will end up in at the Cheltenham Festival and make the World Hurdle favourite at 8-11. She is 5-4 to turn up in the OLBG Mares' Hurdle again, 10-1 the Champion Hurdle and 25-1 any other race.

Mullins left us none the wiser either, stressing no avenue is closed to Vroum Vroum Mag.

"She was very keen today. Maybe at Cheltenham there would be more pace and she would settle better. At the moment every option is open for her," said the champion trainer afterwards.

He added: "She works with our Champion Hurdle horses, we know she stays three miles now, and she can go over hurdles and jump fences. She's the super-sub in the Ricci team and that's where she fits in. She's an extraordinary mare."

Extraordinary indeed and she has now won 11 of her 12 starts since joining Mullins, with only the narrowest of defeats to Apple's Jade in the Hatton's Grace Hurdle at Fairyhouse having prevented her from being unbeaten since her arrival at Closutton.

Ruby Walsh felt it was idling rather than tiredness which ensured the winning margin was only a length and a quarter, with Snow Falcon two and a half lengths back in third.

"She does not do much when she gets there," Walsh said. "She travelled super, she jumped super and she had Patrick [Mullins, on Shaneshill] well covered coming down to the last. She was idling."

Mullins was full of praise for both Clondaw Warrior and Shaneshill, both of whom played a starring role in a fascinating race, and believes the Stayers' Hurdle could be the aim for both.

He said: "Shaneshill was running a fantastic race. Patrick was keen to make it and maybe that suits him better as it's the first good race he's run this year.

"Clondaw Warrior also ran fantastic and gets three miles. Katie [Walsh] had him very settled, and both of them are Stayers' Hurdle contenders.

Vroum Vroum Mag remains unchanged as Ladbrokes' 2-1 favourite for the OLBG Mares' Hurdle, while Paddy Power and Betfair make her 5-1 second favourite behind Unowhatimeanharry for the Sun Bets Stayers' Hurdle.

FIRST PUBLISHED 4:03PM, DEC 28 2016
She's the super-sub in the Ricci team and that's where she fits in. She's an extraordinary mare