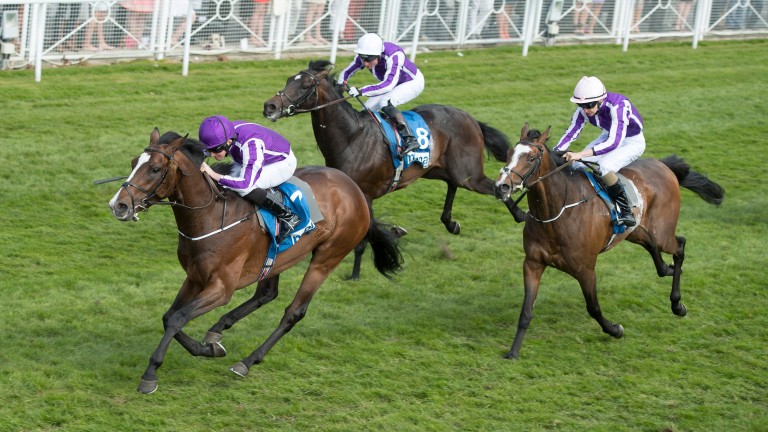 Venice Beach beats stablemates Wings Of Eagles (far side) and The Anvil in the Chester Vase
Edward Whitaker (racingpost.com/photos)
1 of 1
By Andrew Dietz 5:17PM, MAY 12 2017

Repeating what he achieved in the Derrinstown on Sunday, the trainer was responsible for the first three home in another key Classic prep as Venice Beach, the mount of Ryan Moore, led home Wings Of Eagles and The Anvil by one and quarter lengths with the second and third separated by a nose.

Moore was quickly out of the gates on Venice Beach, an emphatic Tipperary maiden winner last month, but he allowed The Anvil to set the tempo through the early stages.

Approaching the final turn, Venice Beach came under pressure and he momentarily looked short of room against the inside rail but found a way out and was well on top at the finish to provide O'Brien with a fifth straight win in the race – and eighth in total.

Regarding the winner, another progeny of Galileo who is in the limelight following a Guineas double at the weekend, the trainer said: "He's a little bit lazy and a little bit babyish. We felt it would be best to bring him here, as he had a good bit to learn. He was in there against the fence, he had to make room and you learn a lot in this place as a lot of stuff happens very quickly."

Asked about his prospects of running in the Derby, O'Brien said: "The lads will talk about that and see what they want to do. We know he stays a mile and a half, we know he handles quick ground and we think he's a horse that will improve."

Venice Beach was the subject of a wholesale cut by the bookmakers for the Derby with Coral and Betfair Sportsbook going a standout 20-1 (from 33).

Moore, who has partnered the last five winners of the race for O'Brien, had an educational first spin on the 5-2 favourite.

"I was very happy with him as he's a babyish horse and he will have learnt as he went round there," he said. "It was all new to him and he was trying to organise himself round those tight bends as he's a long-striding horse." 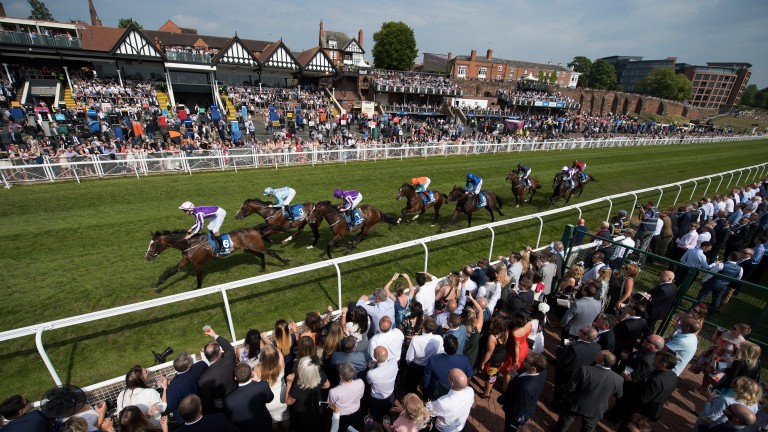 Early stages: runners in the Group 3 Chester Vase pass the stands for the first time
Edward Whitaker (racingpost.com/photos)
For all the unbridled joy at Ballydoyle, the trials domination has hardly aided the process of whittling down 26 Derby entries into a streamlined battalion, potentially led by Qipco 2,000 Guineas hero Churchill, whose participation at Epsom is set to be decided in the coming days.

Wings Of Eagles did his prospects of making the final squad no harm with an encouraging late surge under Seamie Heffernan to edge out The Anvil, ridden by the trainer's son Donnacha, by a nose.

"I'm delighted with him," said O'Brien, who was not ruling out the possibility of running all three in the Derby.

"We liked him last year and he had a lovely run in France, although his finishing position was back a bit, and if he was going to be ready for the Derby, he needed to run. He travelled well and settled well."

"He was the horse Ryan was thinking about but then he said, as he hadn't ridden the other horse [Venice Beach], he wanted to ride him. The third horse [The Anvil] was the one with the strongest form in the race and he was right there and they came and got him."

O'Brien will be back at the track on Friday to run the rule over another of his Epsom aspirants with Cliffs Of Moher running in the Homeserve Dee Stakes, while attentions will turn to Sir John Lavery on Saturday in Lingfield's Betfred Derby Trial Stakes.

"Those two are only just ready to start back as they had a few little hold-ups in the spring, but they looked very exciting types last season and work like very classy horses at home," the trainer added.

FIRST PUBLISHED 3:48PM, MAY 11 2017
We know he stays a mile and a half, we know he handles quick ground and we think he's a horse who will improve