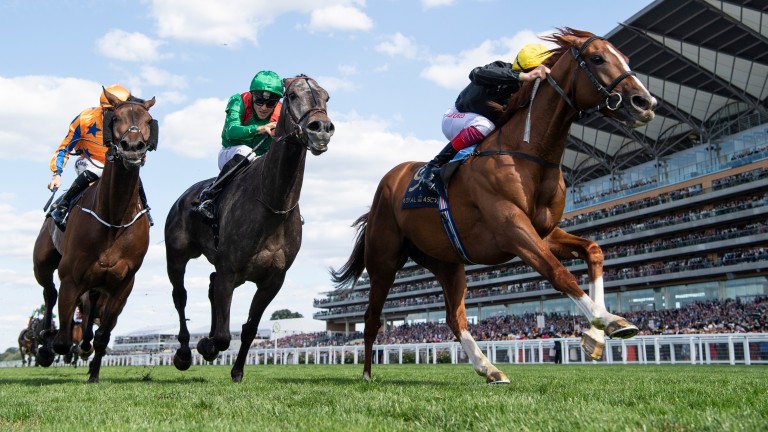 Vazirabad (centre, green silks) will not be sent to Goodwood for a rematch with his Ascot Gold Cup conqueror Stradivarius (yellow cap) at the end of the month
Edward Whitaker
1 of 1
By Scott Burton 1:11PM, JUL 6 2018

They produced one of the most rousing finishes to any of the 24 races at Royal Ascot but Gold Cup principals Stradivarius and Vazirabad will not face off in the Qatar-sponsored Goodwood version after connections ruled out a return visit to Britain for the French stayer.

Vazirabad will be rested in preparation for an autumn campaign, with the Prix du Cadran and the Prix Royal-Oak the likely targets for the six-year-old.

"It will come too quickly and instead we will try to get him back in top shape for the end of the season in France."

Stradivarius, who won the Goodwood Cup last year, is a general even-money shot to complete the Ascot-Goodwood double, which would put him within touching distance of the Weatherbys Hamilton Stayers' Million bonus.

The Gold Cup was more than just an Anglo-French duel, with third-placed Torcedor trading at a best priced 8-1 for the Goodwood Cup, and fourth-placed Order Of St George – who has four lengths to find with Stradivarius – available at 6-1.

FIRST PUBLISHED 1:11PM, JUL 6 2018
It will come too quickly and instead we will try to get him back in top shape for the end of the season in France